AMD is getting ready to launch their next generation of Ryzen 5000 CPUs based on the new Zen 3 architecture, and whilst we haven’t got any official 3rd party benchmarks or reviews yet for the new chips, Passmark has now crowned the new Ryzen 5 5600X CPU as the best performing single-core processor, beating the tremendous amount of competition from Intel at a fraction of the price. 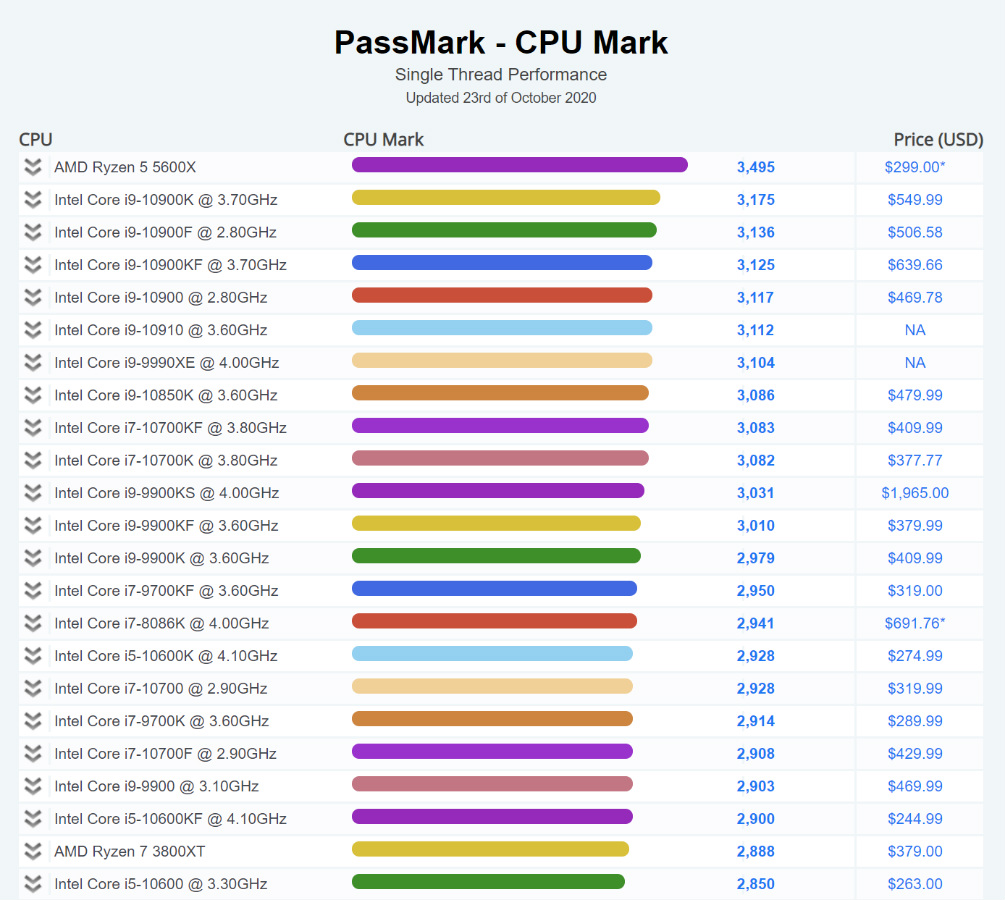 Of course, this doesn’t measure overall performance and it's likely the 5600X won’t be beating out the Core i9-10900K at Multi-Core performance, but it's still impressive nonetheless and goes to show the incredible strength of Zen 3’s Single Core performance.

AMD’s mainstream X600-branded CPUs have remained incredibly popular among the Ryzen processors, and considering how many of you were more interested in the 5600X over any of the other CPUs in the lineup when they were announced (with more interest on the 5600X than the other 3 combined), the Ryzen 5 5600X is clearly going to be a big winner for this new series.

Of course the 5600X is $50 more than its predecessor - the Ryzen 5 3600X - but considering the jump in performance all the while being even more efficient and the fact that its giving Intel a run for its money already, makes the increase in price worth it in our opinion.

What do you think? Are you looking to upgrade your CPU? Are you excited for AMD’s new generation of Ryzen 5000 processors? Which one are you considering to buy? Let us know!

Are you looking to upgrade your CPU?

If intel loses its only strong suit of single core performance (gaming crown) the intel marketing team must be sweating profusely.

Im pretty sure intel will be back on game but it seems like their new gen will be released at the end of 2021, so basically whole year for amd to be king in absolute every performance metric.

And after in 2021 AMD will have a new AM5 with ddr5 and pcie 5.0. Intels going a strage route for desktop of android-ish approach of big-little cores combined.

Lets not forget that intel still manages to compete with tsmc's 7nm (well, until 5000 series) also lets not forget that intels lithography is not equivalent to tsmc measurement and also intel is still much bigger company and has a lot of resources to jump back its just that it might take a while either until end of 2021 or 2022.

Cool to see. If it were $100 cheaper I would definitely be regretting buying my CPU recently. It's nice that I can pop in a 5700/5800 a few years down the line if need be though.

ALL HAIL AMD, INTEL AND THEIR IDIOT FANBOYS SUCKS!

No need to be insulting...... also, you'll learn young grasshopper that being a fanboy for any company eventually comes back to bite you in the rear........ you're best off choosing what does what you need it to do for a price you're willing to pay and ignoring what brand it is.