Ghostrunner, the first-person platforming slasher, arrives tomorrow. The Cyberpunk-themed action game involves a lot of fast movements across a gorgeously realized dystopian city, but how well does the game perform? We take a look at the PC performance benchmarks for Ghostrunner...

First of all, in this PC performance benchmark article for Ghostrunner, we benchmark a range of graphics cards going from the higher-end RTX 2060, the lower-end R7 370, as well as the mid-range GTX 1060 which is close to the recommended GPU the GTX 970. Then we go through the FPS test results of each graphics card running at 1080p, 1440p and 4K screen resolutions. From there we can see the performance of the minimum and recommended system requirement graphics cards and consider how well optimized Ghostrunner really is.

Unfortunately, Ghostrunner does not include an in-game benchmarking tool, so for all of these results below we fired up a level, did some platforming, and sliced a couple bad guys. This is the majority of what you'll be doing in Ghostrunner so we feel this is pretty representative of your experience playing most of the game in terms of FPS performance.

In addition, when launching Ghostrunner for the first time from Steam you will be greeted with a message asking whether to run the game using the DirectX11 or DirectX12 API, the latter of which will be needed to enable ray tracing settings.

We found performance to be quite... interesting, depending on the graphics card you're using, so we've provided some comparisons in performance between the two APIs. This could easily be chalked up to the fact that the DX12 API is currently an experimental build, so there are likely some issues to run into there.

Ghostrunner also features the use of DLSS support to increase performance by rendering at a lower resolution then upscaling to your desired resolution. Since this will be most relevant for enabling ray tracing, we've also provided a performance comparison using the RTX 2060 whilst using the technology.

With that in mind, let's jump into the performance benchmarks for Ghostrunner... 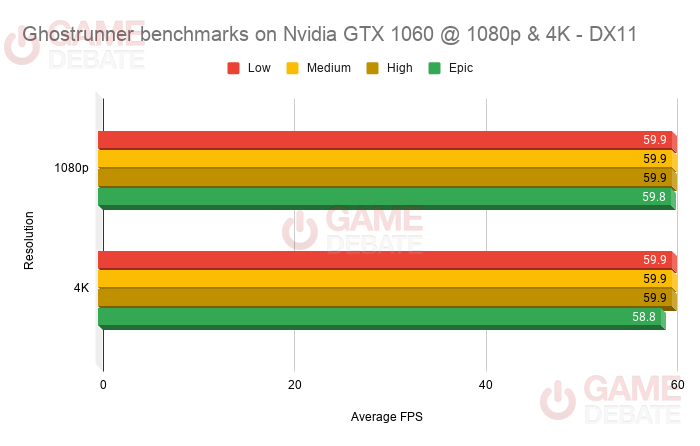 At first I booted up the game using a GTX 1060 using the DirectX11 API to see what performance would be like. Surprisingly, upon loading I found that performance was capped at 60fps no matter what graphics settings were used. As you can see, the average frame rate never goes above 60fps.

I then decided to run Ghostrunner at 4K using the DX11 API to see if performance would be different at all. Again you can see that the frame rate is capped at 60fps since the average frame rate never goes above that.

I couldn't discover a fix for this and deduced that it must be from no exclusive fullscreen option available and the fact that some games cap your FPS to the monitor's refresh rate on borderless windowed mode. Nevertheless, I decided to launch the game again using the DirectX12 API to see if there would be any difference.

Upon launching Ghostrunner using DX12 instead of DX11, I noticed a significant boost in frame rate above 60fps, suggesting that the root problem had something to do with the DiretX11 API.

I then tried to switch between resolutions and seemingly tricking the game by changing my desktop resolution using the Nvidia Control Panel (as borderless fullscreen mode matches your monitor resolution and can't be changed) and then relaunching Ghostrunner. However, whilst it had a slight impact on performance, the rest of the cards saw barely any difference in terms of performance between resolutions, so I'm unsure as to what the actual problem here is.

Nevertheless, there was definitely something happening though as the FPS did decrease on average when increasing the game's resolution. So if you're interested in the results, then here are the PC performance benchmarks for the GTX 1060 graphics card... 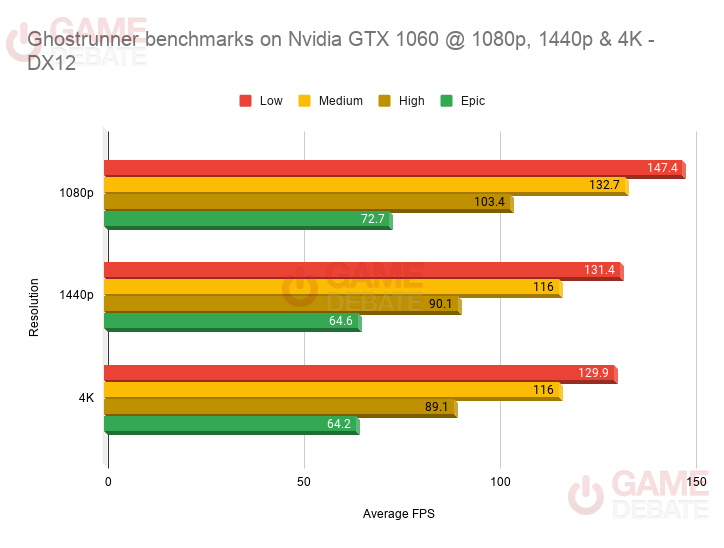 At 1440p, the FPS performance for the GTX 1060 graphics card in Ghostrunner is still really good, one again achieving higher than 60fps even on the highest graphics settings.

As you can see though by looking at the results above, there is definitely a difference in FPS performance when changing your desktop resolution in Ghostrunner whilst running in Borderless Window mode. However, the change is so miniscule between 1440p and 4K that I'm unsure whether this is to do with the DX12 API, borderless window mode, or even the game not actually running at a higher resolution than the 1080p monitor we were using for these tests.

Because of this, I wouldn't take the 1440p and 4K results as accurate benchmarks, as a 10fps difference between 1080p Epic graphics and 4K Epic graphics doesn't seem right. Though if you have any ideas yourself as to why this is happening, or even if you have a 4K monitor and some FPS results from Ghostrunner then do please let us know in the discussion are below!

After using the GTX 1060 graphics card I switched to the Radeon R7 370, as the RX 550 4GB version is listed as the required GPU for minimum specs (60fps, Low graphics settings, 720p resolution) and I wanted to see what performance on a lower-end GPU would be like, and whether it could run Ghostrunner at 1080p resolution. 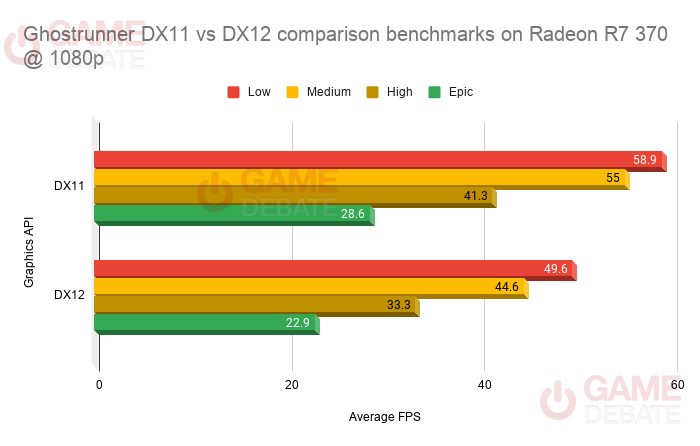 The FPS performance of the R7 370 at 1080p when using the DirectX11 API in Ghostrunner is okay. At Low and Medium graphics settings this card handles performance relatively well and is still comfortable and playable at this performance.

However at High and Epic graphics settings, performance drops considerably and considering the fast-paced quick-thinking nature of Ghostrunner this felt very uncomfortable to play and I noticed my performance in-game was negatively affected.

When using the DirectX12 API in Ghostrunner at 1080p with the R7 370 GPU, the FPS performance actually decreased. Here I would say on Low graphics settings was comfortable, whilst Medium was certainly playable but very hard to be precise in my movements and accuracy. High and Epic graphics settings here are a no go same as above.

As you can see, there is a noticeable difference between using the DirectX11 and DirectX12 APIs. If you are using the DX12 API in Ghostrunner you will find you can gain anywhere from 5-10 fps just by switching over to DX11 instead. Interestingly, this is the opposite of what we've seen in the GTX 1060 benchmarks above and the RTX 2060 benches below. 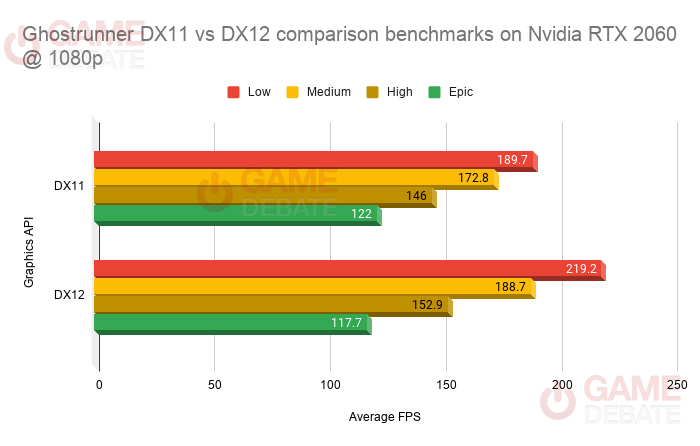 As for the DirectX12 API, the RTX 2060's FPS performance is even greater the lower the graphics settings, regularly achieving higher FPS than DX11 on Low-High graphics settings. However, when running Ghostrunner on Epic graphics settings in DX12, FPS is actually lower than the DX11 equivalent.

Interestingly though, it seems that DirectX11 is much more stable than DirectX12, as DX11 showed considerably higher 0.1% FPS than DX12, which we would say was very noticeable in gameplay. Using DX12 introduced a lot of stuttering whereas DX11 felt a lot smoother to play. So unless you want to be using the ray traced effects, we would suggest sticking to DX11 on the RTX 2060.

Overall though, no matter the API you are using the RTX 2060 is perfect for playing Ghostrunner at 1080p on the highest graphics settings available. 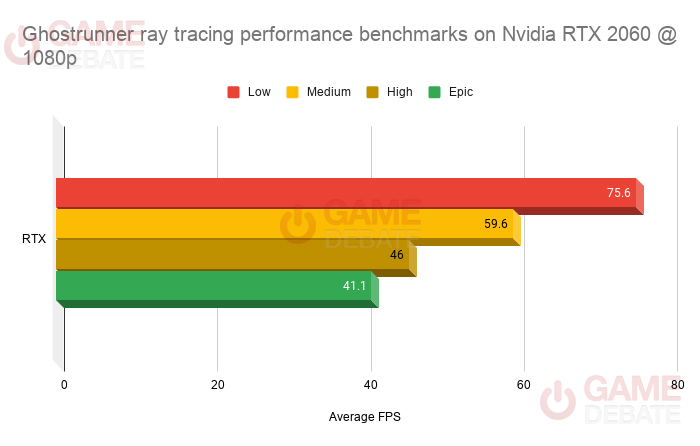 As for ray tracing performance, the FPS performance of the RTX 2060 is okay, reaching around 60fps or higher on Medium or Low graphics settings. On High or even Epic graphics settings frame rate drops below 50fps and becomes noticeably more stuttery, though not unplayable.

Overall, the RTX 2060 is fine for running Ghostrunner and using ray tracing effects, however it is recommended to use DLSS at the same time when using this specific GPU. 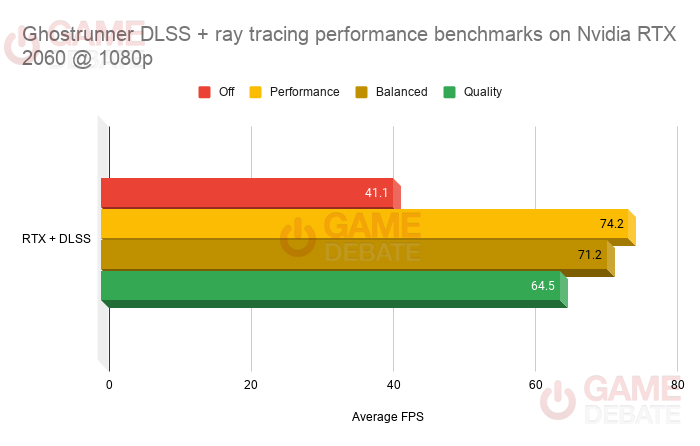 With the low frame rate on Epic graphics settings whilst enabling ray traced reflections and shows in Ghostrunner, we wanted to see if enabling Nvidia's DLSS technology would significantly increase frame rate to a playable state. Ghostrunner currently includes Performance, Balanced, and Quality mode DLSS options, giving us varied control over what kind of image quality and performance we expect. All results above were taken when running Ghostrunner at 1080p resolution at the highest graphics settings with ray tracing enabled.

Looking over the results, we can see that enabling DLSS in Ghostrunner whilst using ray tracing effects increase frame rate performance significantly, achieving 23-33 higher fps depending on the DLSS mode used.

Performance mode would be your best bet for the best performance throughout the game, whilst Quality mode may dip below 60fps during some of the more demanding moments in-game, but certainly not to anything unplayable.

Looking over all the results, we can see that Ghostrunner is not a very demanding game and can run very smoothly on most modern PC hardware, unless you are using the ray traced effects of course. Though the inclusion of DLSS technology can even further improve your performance.

Ghostrunner can also run on low-end hardware, though only on the lower graphics settings. However, the use of FidelityFX upscaling from AMD should increase frame rate without affecting image quality too much.

There does seem to be some performance discrepancies between DirectX11 and DirectX12 APIs, sometimes capping the frame rate t your monitor's refresh rate when using DX11. Though you will almost always experience higher FPS when using DX12, but at the cost of some noticeable stuttering. Though this may only occur with Nvidia cards, as there are some cases where switching to DX12 may actually decrease frame rate, but this was with the lower-end R7 370 AMD GPU.

If you want to run Ghostrunner at its best, it's recommended to try out some benches yourself between the DX11 and DX12 APIs and let us know what kind of results you got. Did you see an improvement from DX11 to DX12? Or a decrease? That way we can determine better what is causing some of these performance discrepancies.

I've started the game in DX12, turned on ray tracing and it's setting itself back to off when leaving the menu.
Edit: Sadly enough, this seems to be Ampere related...

Even later edit: This was fixed by enabling it via GeForce Experience when optimizing. I see quite some people on the internet also had this issue and no one had a precise fix, but this seems to be it, until they update the game.