Dirt 5 splashes onto our screens this Friday like the very dirt it skids and races through. It certainly looks pretty, but how well does the latest racing sim perform? Is it demanding like the F1 cars in the Grand Prix? Or is it smooth like the latest sports cars? We take a look at the PC performance benchmarks for Dirt 5...

First of all, in this PC performance benchmark article for Dirt 5, we benchmark a range of graphics cards going from the mid-range GTX 1060 which is close to the minimum required GPU, the GTX 970, as well as the RTX 2060 which is similar to the recommended GTX 1070 Ti GPU for best performance.

Then we go through the FPS test results of each graphics card running at 1080p, 1440p and 4K screen resolutions. From there we can see the performance of the minimum and recommended system requirement graphics cards and consider how well optimized Dirt 5 really is.

We tried to benchmark using the lower-end AMD cards we have on hand like the R9 380 and R7 370, but unfortunately we encountered some issues with these cards that will be explained more in the conclusion of this article.

Dirt 5 does include an in-game benchmarking tool, but considering in recent titles the benchmark tool hasn't been indicative of real in-game performance, we decided to not use it. So for these results listed below we fired up the game and took part in one of the first few races available, and then started driving around on the course for a few minutes overtaking and (accidentally) smashing into other cars. Overall, we felt this was pretty representative of the typical experience you will have whilst playing Dirt 5.

With that in mind, let's jump into the performance benchmarks for Dirt 5... 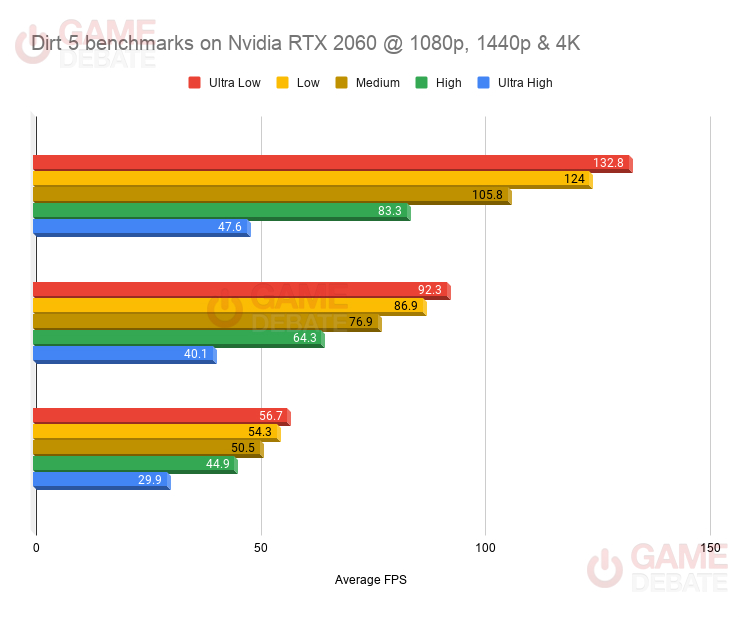 The FPS performance for the RTX 2060 in Dirt 5 at 1080p is pretty good, reaching far above 60fps even up to High graphics settings. However, interestingly the Ultra High graphics preset seems to be very demanding and almost cuts fps by half compared to the previous preset level. Nevertheless it was still playable on the highest graphics settings at least.

At 1440p resolution, the RTX 2060's FPS performance in Dirt 5 is still pretty good, once again reaching more than 60fps up to High graphics settings. Here, the dip in performance from High to Ultra High is much less drastic, but still much lower. Thankfully, Dirt 5 is still playable at this frame rate, but is noticeably more comfortable at 60fps.

Finally, the RTX 2060's FPS performance at 4K resolution in Dirt 5 is still okay, whilst it doesn't reach 60fps performance even on Ultra Low graphics settings the game is still playable and enjoyable up to High graphics settings. On Ultra High this frame rate dips below 30fps, and is not recommended due to some moments being more demanding that will drop the FPS below a comfortable mark.

Overall, the RTX 2060 is perfectly suitable for playing Dirt 5 at 1080p, 1440p, and even 4K depending on your performance preference. Ultra High graphic settings seem to be incredibly demanding and it is more often recommended to stay on High graphics settings for the extra frame rate head room in case you catch yourself in a more demanding gameplay situation. 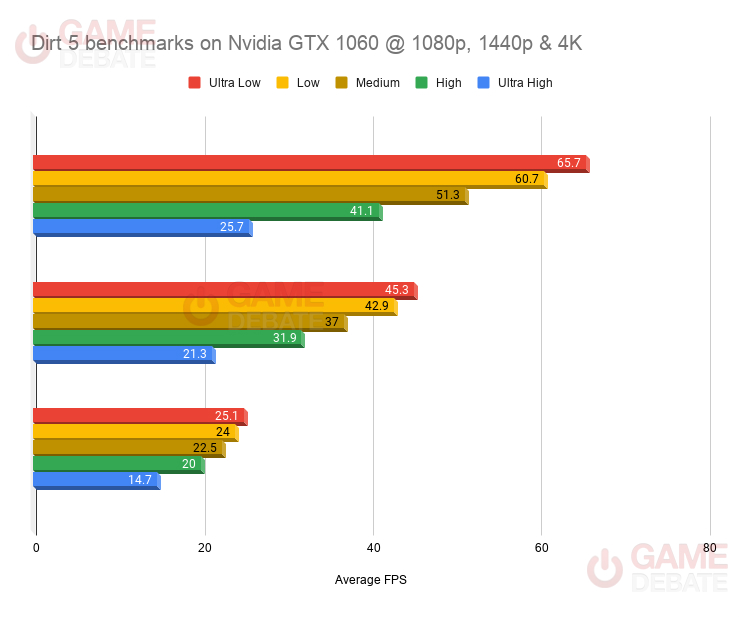 The FPS performance for the GTX 1060 at 1080p resolution in Dirt 5 is okay. Unfortunately this GPU only reaches above 60fps up to Low graphics settings, and although still playable at Medium to High settings, Ultra High is noticeably less smooth and uncomfortable. At this frame rate I found my handling of the car to be much worse and I was crashing into things like the sides of roads or other cars more often than not.

At 1440p the FPS performance for the GTX 1060 in Dirt 5 is still okay and still playable up to High graphics settings. Although you may want to stick to Medium settings for a little extra headroom just in case. Once again, Ultra High is definitely unplayable at this resolution.

The GTX 1060's FPS performance in Dirt 5 is completely unplayable at 4K resolution. At this point the game is noticeably more difficult to control even on Ultra Low graphics settings, and caused a significantly less enjoyable and uncomfortable experience.

In the end, the GTX 1060 is perfectly fine for playing Dirt 5 at 1080p resolution for a smooth 60fps performance, however you will have to stay on Low graphics settings. It's still playable up to High settings but Ultra High is not recommended for an enjoyable experience. 1440p is also playable, though under 60fps and should probably stay on Medium settings for the best performance. As for 4K, Dirt 5 is completely unplayable at this resolution when using the GTX 1060 GPU.

Overall, Dirt 5 is a pretty demanding game, even on the lowest graphics settings for some modern cards. With the GTX 1060 dipping below 60fps on Medium or High settings, and even going below 30fps on the Ultra High graphics settings, means in order to play Dirt 5 at it's best you'll need a pretty beefy GPU.

Whilst you certainly can play Dirt 5 down to 30fps if needs be, you'll have a much better time at 50-60fps as you'll have much smoother performance to make those harsh turns with pinpoint accuracy. At 30fps or below the game becomes quite difficult to play and I found myself crashing into the sides of the road and other cars more often than not.

As for whether Dirt 5 works on any AMD hardware? We tried to benchmark using the Radeon R9 380, but unfortunately we couldn't get the game to launch, even after updating the official drivers and trying out the optional Beta driver as well. We tried it again with the R7 370 to no avail.

Initially we thought this might be an issue with not meeting the minim requirements in order to run Dirt 5, as the R9 380 is below the AMD minimum required hardware of the RX 480. However, we also managed to test the game externally using an RX Vega 64 graphics card. This time the game was able to launch and we were able to play a couple races before experiencing significant crashing issues.

This leads us to believe that there is either poor optimization for AMD hardware, or AMD has yet to release a stable and suitable driver for Dirt 5. But considering that AMD already released a driver adding support for Dirt 5 a couple of weeks ago, it's more than likely the developers have yet to implement proper support for AMD hardware before launch.

Either way, we did not receive any messages on screen telling us the specific issue, and so we won't know for sure until either a driver or update comes out for Dirt 5 before launch. Suffice to say, if you were planning on playing Dirt 5 with AMD hardware, it's probably best to wait a bit until the performance issue is solved before official release.

All in all, Dirt 5 can be pretty demanding even on modern day hardware, and will need a pretty powerful graphics card in order to looks its best. However, Dirt 5 is still playable between 30fps-60fps, so there's room to budge up the graphics a bit at least. Additionally, Dirt 5 already looks pretty good at the Lowest graphics settings, so you won't be missing out on much whilst gaining more frames. But AMD users should be wary before an official update/fix comes out to properly support their hardware.

Read below i posted my findings, thats with my gpu memory at 1100mhz as well. Your card should do a bit better then mine.

I read it, i just wanted some more amd graphs

This game looks like games made around 2014 and still demands this kind of hardware.

"Follow up comment"
Even though the advancement in graphics isn't equivalent to the leap of graphical power? I think this is absurd for Dirt and WD legion so far (WD looks good but still not justified).

Guys, I'm not a conspiracist, nevertheless this is ridiculous, I've not played the game yet, but isn't it suspicious? With every generation release the games become exaggeratedly demanding (check below comment for the remainders)

It is yea, i think its optimized for next gen consoles, my system gets 70fps with ease on all high so i suspect next gen gpus and console can get 4k 60fps easy.

Getting about 70fps avg on mine with my setup but on a ultrawide so slightly more pixels to render. Ultrahigh gets me around 50 or so fps. Very demanding but game looks really good.