Nvidia recently detailed some massive performance gains thanks to its implementation of DLSS in Call of Duty Black Ops Cold War. If you’ve recently purchased the game and want to play at the best quality settings possible with ray tracking enabled at 4K resolution, you can apparently expect a massive 85% performance improvement by enabling DLSS.

DLSS is Nvidia’s proprietary deep learning technology that renders games at a lower resolution and then upscale the image using AI to provide a just-as-good native image quality whilst reaping the performance benefits of a lower resolution.

Mvidia has provided some performance graphs to show us exactly how much FPS we can gain by enabling DLSS in Call of Duty: Black Ops Cold War. Additionally, they have also provided some brand new comparison screenshots to see how much the new ray tracing technology impacts the graphical quality, and to see if it's really worth the performance costs.

There’s no doubt that ray tracing tech improves the image quality of games, however the performance impacts are pretty touch and go when it comes to whether or not it's actually worth enabling. Thankfully DLSS helps with that by improving performance substantially. But before we get into the actual performance numbers, let’s take a look and see how the ray tracing tech looks in COD Black Ops Cold War…

Up first is a small scene in the briefing room, where multiple characters are standing against a direct light. You can see that the character’s shadows look much more realistic with ray tracing as the light gets diffused around the edges depending on their distance and orientation to the light, creating softer shadows.

The next one shows the same effect, but this time shows how shadows will now retain even more detail, allowing light to cast around the individual branches and leaves of a tree in the scene, rather than a flat shadow blob.

Finally, another scene that shows both of very well, but this time showcasing how Ambient Occlusion can also enhance a scene’s atmosphere by adding depth to the environment as well as the objects within it. More specifically, ray traced ambient occlusion determines exactly how much light should fall onto each object in the scene, allowing for much more lifelike shading without over-darkening areas within the scene.

There’s no doubt that it all looks great, but it’s up to you whether the performance cost is worth the added quality and detail. Chances are, if you have a top end RTX card like the RTX 3080, then enabling the features will be fine. But for lower end cards or enabling them at 4K resolution, you may want to try out the DLSS tech to increase your frame rates.

The main event here is the phenomenal performance gains that Nvidia boasts by using DLSS in COD Black Ops Cold War. By enabling the feature along with ray tracing, you can expect up to 85% performance improvements at 4K resolution, depending on your graphics card used.

All tests were conducted using the aforementioned graphics cards on a PC setup with a Core i7-8700K processor and 16GB of RAM on a Windows 10 x64 operating system.

Up first we have the 4K performance benchmarks at Ultra graphics settings and DLSS set to “performance” mode. All following benchmark graphs include ray tracing enabled to the highest quality. 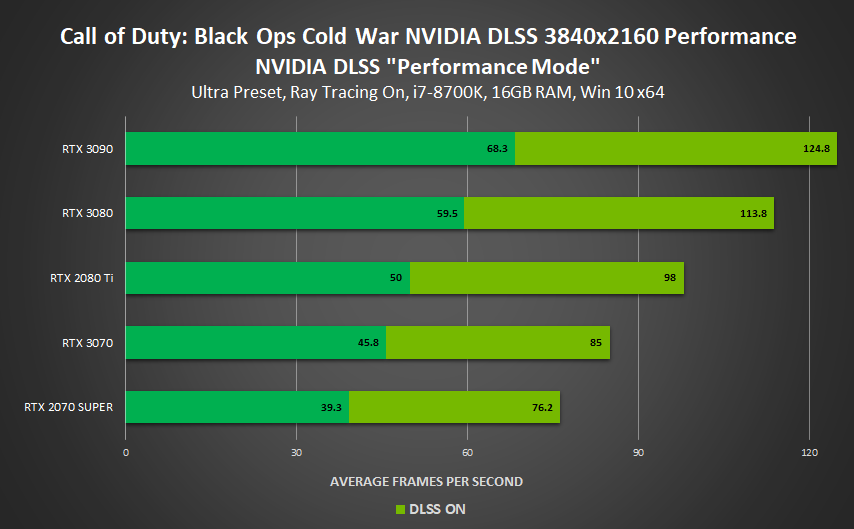 For the RTX 20 series, the RTX 2080 Ti will see FPS improve from 50fps to 98fps, and the RTX 2070 Super from 39.3fps to 76.2fps. The RTX 2060 was not provided in this graph - despite being present in the rest - it’s possible that the GPU was not able to achieve above 60fps performance when DLSS was enabled even on Performance mode and so was not included here.

Up next we have the 1440p benchmarks in Call of Duty Black Ops Cold War when DLSS is set to “Quality” mode at the Ultra graphics preset and ray tracing enabled. This time including the RTX 2060 in the results. 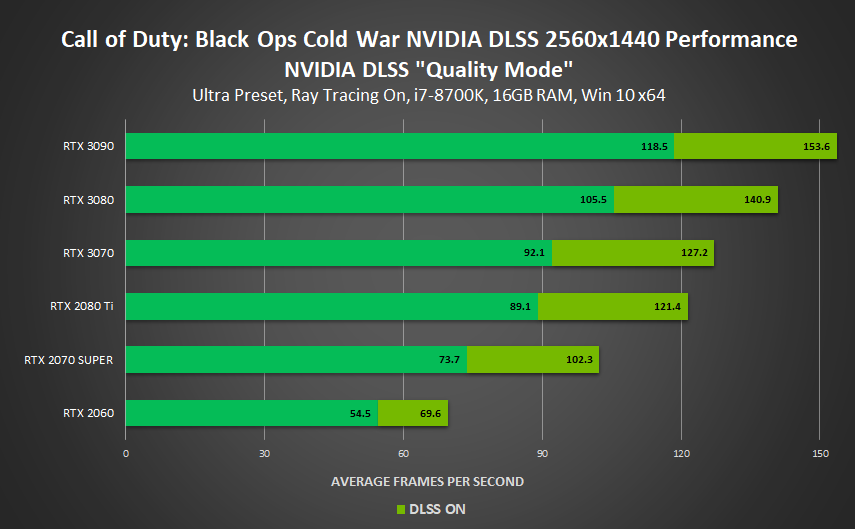 As you can see, at 1440p the performance gains aren’t quite as substantial as 4K, but this does mean that lower end cards in the series like the RTX 2060 is easily able to achieve over 60fps performance.

Lastly, we have the same test again but at 1080p resolution with DLSS “Quality” mode and ray tracing turned on with Ultra graphics settings. 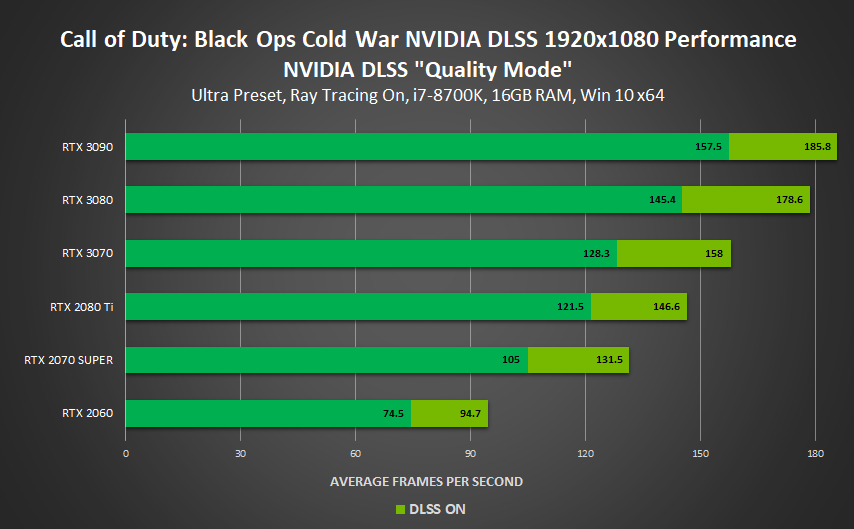 Overall, the implementation of DLSS in Call of Duty Black Ops Cold War sees some substantial improvements to FPS when ray tracing is enabled. The performance improvements are much more significant the higher the resolution, and looks like most RTX cards will be able to achieve more than 60fps at 4K resolution even on Ultra graphics settings.

1440p will most likely be the most comfortable spot for those using an RTX 2060 card which will achieve over 60fps when DLSS is set to Quality mode.

Of course, it’s up to you whether the performance costs of enabling ray tracing is worth it for the graphical improvements, but is highly recommended to turn on DLSS if you do to see massive performance gains.

Call of Duty Black Ops Cold War also includes the Ultra Performance mode for DLSS which will allow you to reach certain resolutions like 8K, but will most likely require one of the top end RTX 30 series cards in order to perform at a decent frame rate.

What do you think? Have you been playing Call of Duty Black Ops Cold War? Is the ray tracing effects worth it? And did you enable DLSS for better performance? Let us know!

How do you feel about the ray tracing effects in COD BOCW?

Is ray tracing worth the performance cost in COD BOCW?

Do you normally enable ray tracing effects when you can?

Do you normally enable DLSS when you can?

“Feels like they took a page from the "EMB" guys' book and made everything extra shiny and wet xD Al...” - xquatrox

Not bad, the shadows do look a lot more realistic!
Also I'm keen to see what DF think of the DLSS implementation here. It's not yet on par with native in some regards, but 2.1 is daaaamn good. Bump it up to 5K and you've got a real deal :)

Honestly i saw that video as well and i have mixed feelings, as it is like cheating to reach 4k resolutions and the quality isnt 100% identical to true 4k

It is close enough to native 4k quality when you consider the massive performance boost.

Sometimes certain settings are just worth the boost if you want to reach a particular frame-rate.

Hey how is your cpu holding? what is the usage?

Then cpu bottleneck i quess. The cpu can't push any more fps. But yours can

Maybe you are running lower resolution, ?this s why you getting more cpu usage because it has to keep up with higher fps? or maybe something is hogging resources in the background?

Bottleneck was the first idea, but with CPU bottleneck the CPU usage should be 90-100%, not 50% in his case.
In my case there were no background programs using CPU. It just suprised me, because it's previouse generation of i7, I know, it hasn't god a hyperthreading, but this usage is too high.

All kinds of DLSS gains, all kinds.