Cyberpunk 2077 made all it's money back in 1 day, achieves biggest launch in PC history

It’s no secret that Cyberpunk 2077 was a major success at launch, not only has it been 8 years since it was officially announced and garnered a lot of hype in that time since then, but it also broke Steam records for the most amount of concurrent players in a single player game. Now it’s been revealed that developers CD Projekt Red have already earned back all their development and marketing costs, and CP2077 has officially become the biggest launch in PC history.

What’s even more amazing that CDPR apparently earned back all the development and marketing costs of Cyberpunk 2077 through preorders alone. Some 8 million preorders resulted in such a strong financial result that this was all achieved in just a single day. 8 years of development, 3 delays, and Cyberpunk 2077 made all its money back in 1 day. 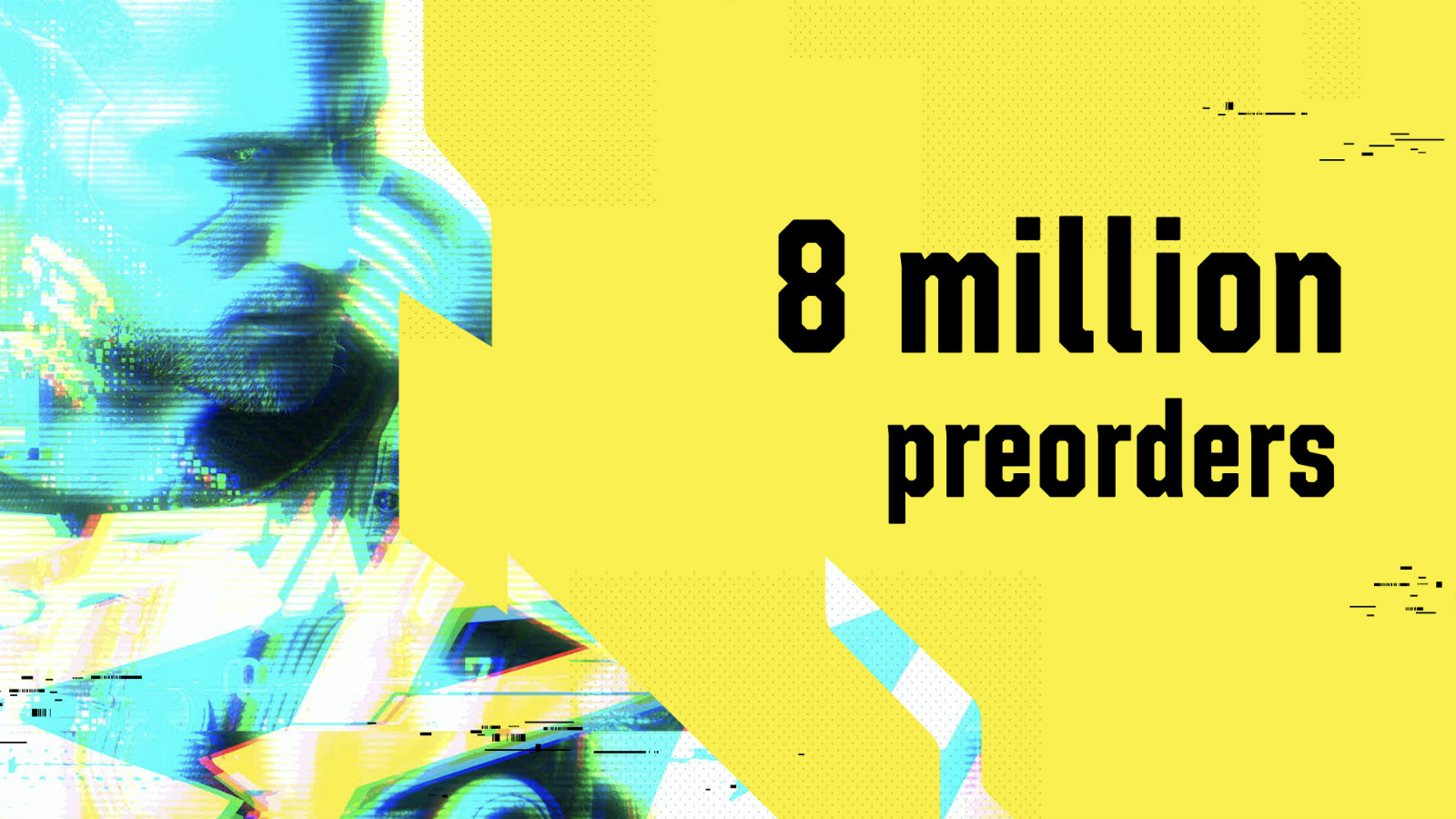 The news comes from a recent financial report for CD Projekt Red:

“The Management Board of CD PROJEKT S.A. with a registered office in Warsaw (hereinafter referred to as “the Company”) hereby announces that the estimated licensing royalties receivable by the Company in association with pre-order sales of Cyberpunk 2077 across all of its digital distribution channels have exceeded the sum of the following:

– total development expenditures related to the game, and

– the game’s marketing and promotional costs borne by the Company – either already incurred or anticipated for the remainder of 2020.”

Whether you think the game is a masterpiece, or does not live up to expectations, you have to admit that this is quite the achievement. But of course the fun doesn’t stop there, as CDPR have been sharing some interesting numbers through their official investor Twitter account, including how many of those 8 million preorders were on console and PC: 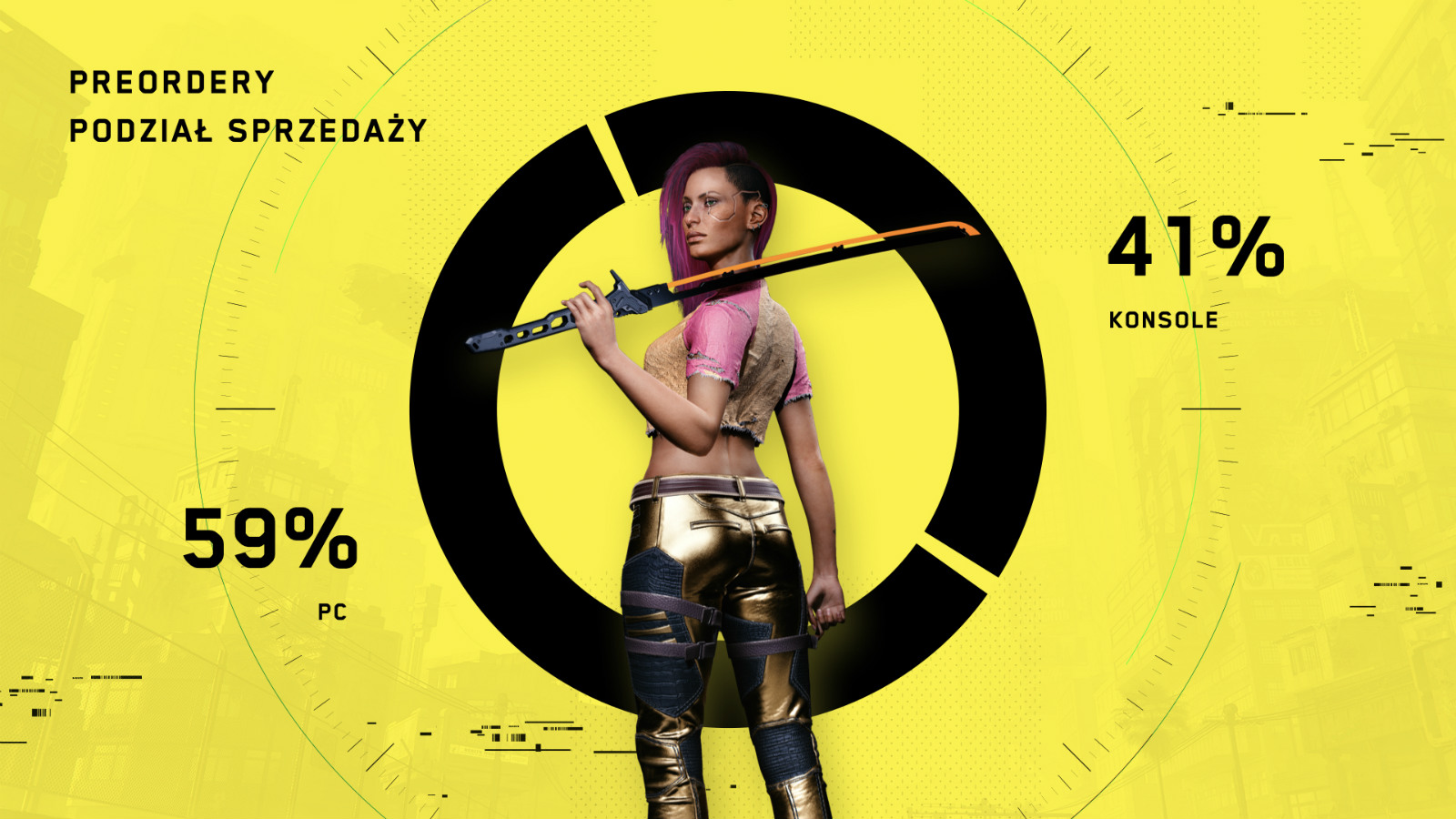 That may not sound very significant, but 59% of 8 million is 4.72 million, which means Cyberpunk 2077 broke the fastest selling PC game of all time record just 2 days after World of Warcraft: Shadowlands boasted the same achievement. And not just that, but Cyberpunk 2077 also exceeded WoW’s record by a cool 1 million units.

And again, these are all based off of preorders alone, so who knows what the numbers will be like with day 1 digital and retail purchases added on top of that.

Did you preorder Cyberpunk 2077?

It still seems weird to me that people cite 2012 as the beginning of Cyberpunk's development when, by CDPR's own admission, they didn't really begin work on the game until 2016, after Witcher 3: Blood and Wine was finished. Prior to that, they'd basically put together a CGI trailer to let people know what their next project was going to be, and then shelved it until Witcher 3 was done.

lol now they are going to loose it all in refunds.

I technically "preordered" it by, like, half a week? I bought it the saturday before release. Still got the preorder goodies, tho, so-, I guess that counts and my purchase is in those numbers.
As for how I've been liking it? Despite glitches, I've been having enough fun to have a higher-than-I-care-to-admit double-digit number of playhours already.

Came here to say the same thing. Bought it a few days ahead of release. Got the goodies. Played a whole bunch of hours, no game-breaking bugs for me, enjoying the ride.

And it rightly deserved to. The End.

thats not what shown, like how did anyone know that game will be good?

from the devlopers, trailers, gameplay and graphics for example when you hear god of war you know it will be good but when you hear assassins creed well maybe not

from trailers and gameplays all you could see is what developers wanted you to see like show you all the interesting sceenes in one video and then you hope that the rest of the game is just as good, as for graphics they are nothing special there are games with better games out there, so all we knew and heard about cp2077 is that its good and the best, but you cant know till its release is it true.
biggest problem about cp2077 is that it was hyped as a game that will excel in each way being the best in everything other games did and now when it launched you can see that its just a mediocre game that fans of cyberpunk setting would like and others who would say that its just ok nothing ground breaking

cracked day one? dude the game didn't have a DRM and therefor couldn't be cracked. For something to be cracked it needs a sort of anti-tempering program, which cyberpunk doesn't have.

noooo, at this point it's just stolen. cracked just give you less guilt than saying it was stolen, which it was if you downloaded it for free.

but at what cost,
preciously crafted reputation of CDPR throughout Witcher franchise is now almost destroyed by Cyberpunk launch delays, pre-release DRM protection, botched quality of game at launch, patches to arrive now.....

I'm still hoping the game development and launch was complicated to decide on, but the lack of smooth launch is something I will never forget, similarly as graphical downgrade of Witcher 3 release;

I still haven't played CP2077 yet, so my experience isn't ruined yet and hopes still live

What's wrong with pre-release DRM to stop leaks? It's either that or companies use stuff like GeForce Now like Outriders did a while back.

probably nothing wrong,
but it was a bit surprising from a company who is so against DRM they basically promote (fck drm) all the time

Oh yeah, was definitely surprising, but that's the only real good reason for DRM in my opinion. It doesn't benefit the customer or game whenever it gets launched with it though

It still seems weird to me that people cite 2012 as the beginning of Cyberpunk's development when, by CDPR's own admission, they didn't really begin work on the game until 2016, after Witcher 3: Blood and Wine was finished. Prior to that, they'd basically put together a CGI trailer to let people know what their next project was going to be, and then shelved it until Witcher 3 was done.

Exactly, Game-Debate even has an article about it here. They mentioned taking the 250-300 people that worked on The Witcher 3 and moving them to Cyberpunk 2077 completely after the last DLC. They even added 200 people to their team for it. Still sucks that it's a bit buggy, but they'll get it sorted

This bugs me as well. It seems like it's just the cool thing right now to rip on CDPR for every tiny thing they can. All over the internet. There are legit things to criticize but people love to find more even when it makes little sense, just to pile on.

Well, does make sense when the "Kotakus" of the gaming community already had it in for CDPR from early on. Maybe they're still at it...

I'm glad for them but the game is an overhype and a great underperformer...Ai is dumb, npc's are there to serve your purpose, your character is on rails, your choices are irrelevant, and off story content is minimal...watch dogs is more fun

CDPR has good link with PC gamers. Without DRM but people love them so they buy the game. On the other side, 1060 recommandation is wrong. So wrong.

On a powerful PC, Cyberpunk is absolutely stunning. Graphics are mind-blowing. Yes, there are a few occasional bugs, but nothing too bad. I'm not disappointed!

It still looks, works, and plays perfectly fine for me on my 1080, 3700x. Anything less, though, and I'd have to compromise on my settings too much. Upgrading to 1080 ti, so hoping to keep settings at native 1440p.