A while ago it was revealed that Cyberpunk 2077 would be getting free DLC much like The Witcher 3 (wow, that rhymed). Details were pretty thin on when we would be getting them or what they would even be, but CD Projekt Red have just announced that the first free DLC will be launching in early 2021.

More info is slated to come out soon, so right now it’s all speculation as to what the DLC could be. If we look at The Witcher 3’s free DLC, we can see that it wasn’t anything major, and just included some new armor sets, alternative costumes for characters, as well as some free quests. So I can imagine the same sort of thing can be expected for Cyberpunk 2077. 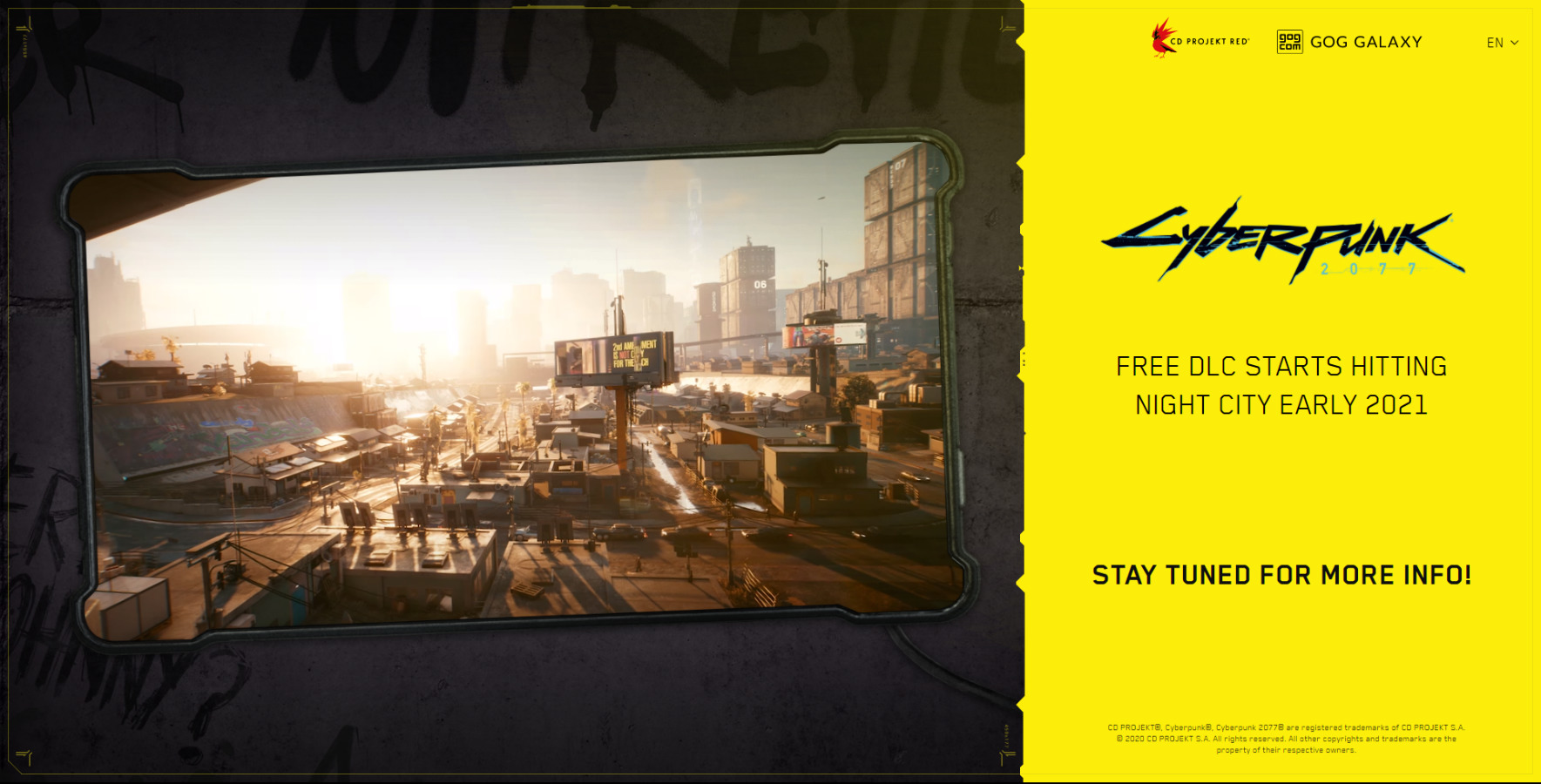 Judging by the reaction to CP2077’s launch though, it will be hard to convince gamers that free DLC in a time needed for patching and fixing bugs is needed. Even if CDPR is a big enough studio to have two separate teams working on bug fixes and free DLC, it will be a hard pill to swallow for most indeed.

Either way, more information will be coming soon, so we can probably expect some clarification on the free DLC sometime in the new year. And as to what “early 2021” means, I reckon we’ll most likely see the first batch of free DLC sometime around March, but there’s no confirmation on that just yet.

i thought they said the reason for the delays was to make a complete game day 1 this is confusing ..

Should focus on fixing existing content, not releasing more bugs...

Is npc ai going to be a dlc?

It feels to me like all the fanboys have turned into giga haters.
I am a complete outsider, watched 1 trailer 2 years ago, absolutely loving the game, even with the bugs in it, best game i played in a while, really impressed by the story.

I'm like you - I never watched any content, I barely know anything about the game other than that it's a huge mess (and I've seen what kind of a mess it is too). I wouldn't say I'm a hater, I try to stay in the middle, but releasing DLC before fixing the nagging issues with the game? A bit dumb...

I feel the same way. I didn't follow any of the news or hype surrounding this game before release. I just decided to buy the game since I liked Witcher 3. This game has quite a lot of bugs and issues all round, but the story, atmosphere and gameplay is just amazing. First new game that really got me hooked in a long while. The soundtrack is a little lacking for me though.

I watched everything and was super hyped, gotta say that my expectations were met, absolutely loving this game, i'm 65 hours into it and still liking it

Feels more like damage control. Messy launch, broken PS4/XB1 version, demanding game, bad AI, poorly tested RPG elements allowing all kinds of exploits,... and so they are like, "but look at that, we have free DLC" to divert attention without showing what exactly are we even getting as DLC. Or how they will manage to do both DLC and fix their game and improve systems in game.

Armors and maybe a sidegig are also DLC. Considering they have a lot to fix, don't expect a beefy story DLC.

We all knew this will happen a few months ago, honestly the ones that got the 3080 and 3070 already are at fault, nvidia is doing what it brings more money to them

"honestly the ones that got the 3080 and 3070 already are at fault"
Bro by the time you got a 3080 Ti in your hands, I will have owned the 3080 for at least 8 months already. You can always wait for the next thing, like that you'll just never end up actually updating your hardware.. "i'M wAiTiNg FoR vEgA" comes to mind.

We're still far away from seeing games that require 10GB Vram at 1440p or lower, so I don't think it'll be a concern in the coming years anyways.

Hope all goes down well for CDPR down the line,but have no intend on,again, getting the game till all the DLCs and the 2 Expansions arrive.

could we expect the content that they were not able to add or was broken, will just be rebranded as dlc?

So... metro system that was advertised but unavailable?

They have fast travel areas, doubt they would remove it just to replace it with 'metro' system.