Despite the ridiculous amount of demand and incredibly low supply of the brand new RTX 30 series graphics cards from Nvidia, the Green Team shows no signs of stopping production on new GPUs as well, as Lenovo has seemingly confirmed the existence of an RTX 3060 (non-Ti), RTX 3050 Ti, and RTX 3050 as well as some specs for each.

The leak comes from Lenovo’s very own own table of specifications for their upcoming Legion gaming systems, and more specifically the Lenovo Legion R5 28IMB05 desktop. Featuring the usual slew of cards from the GTX 16 series, to the RTX 20 and 30 series, it also lists some unannounced cards. The fact that it also lists some specs suggests that this is indeed real and not just a slip up from Lenovo. 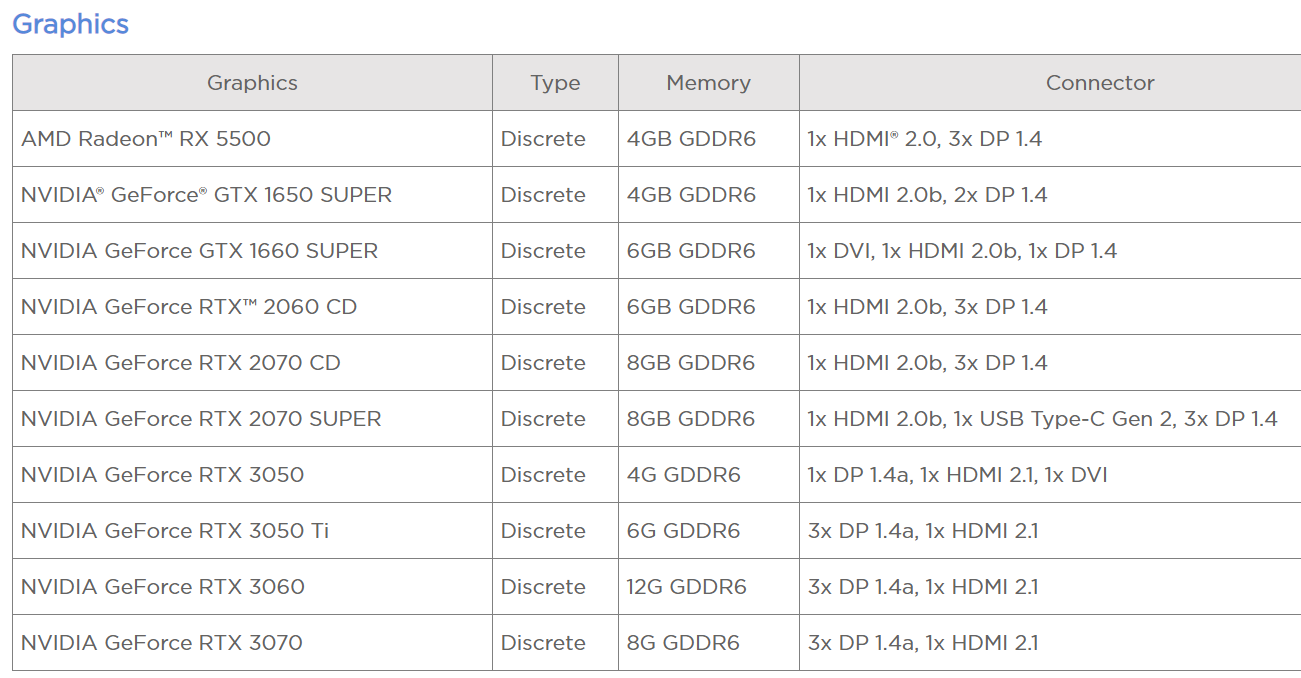 *All the specs listed are rumored and not official, and therefore subject to change.

If these specs and price of the 3070ti are accurate, then my choice is made :) Only 100 usd more for gddr6x memory and 4gb more ram and quite a bit more cuda cores compared to the normal 3070 :) Edit: 2gb ofcourse :) but still gddr6x instead of normal gddr6 :)

It really sucks man, it was known that there will be higher vram gpus in this 2021 when they were selling dumbed down 3070 and 3080, but hey at least you enjoyed your gpu for a few weeks/months and also you can sell your gpu if you want to get back your money or maybe even more and get a 3070ti :)

Yeah I kinda knew this will happen, but I was sitting without a GPU for nearly 4 months, when I spotted a Gigabyte 3070 VISION OC at 650 EUR, which was a whole 100 EUR cheaper than the worst dual fan variant of the 3070, I pulled the trigger. And right now my model sits at 820 EUR, this is beyond crazy.

I'm actually very curious as to what gtx 3050 will be able to deliver...very curious.

This is just shafting the "early adopters" at this point.

192 bus width, so either 6 or 12 gb. Had they used 6 gb everyone would whine all day about how it's insufficient. Guess you can't satisfy some people.

how does that with memory bus and amount of vram works?

I feel that is competition kind of working. Because nVidia has now more interest to compete with VRAM. Plus VRAM is next "oversimplified" metric for general crowd. Also I feel that with GDDR6X, they either had temperature issue or power draw issue, I can't remember which, but I think they are more willing to put more GDDR6 there, since it isn't as pushed to the edge as GDDR6X, so easier to manage.

And for 3060Ti, they really didn't want to give it more than 8GB so soon after releasing RTX370. Hence what now 3060 is getting 12GB variant. Which kind of makes things interesting, 3060Ti will no doubt be better today, but question will always be when those 12GB will allow 3060 to age better.

I'm just so glad I didn't go with a 3080... It was tempting due to the price, but that buffer would have been a joke right now. Plenty enough for most people and what they do, of course, but I'm an oddball (5K+ gaming, 3D work, etc).

Yes, the 4 gb extra vram sounds really good and more "future proof" than the ti version only for the vram alone, but it may still get better fps than the regular 3060, hopefully there is a 3060 super or better yet a 3060ti with 12 gb vram and maybe i will get that if my gtx 1060 isnt enough to play at 1080p

there is a big difference in cuda cores between the 3060ti and non ti version, wonder about the perf difference between the two, maybe we will se a 3060ti 12gb in the future?? this is all messed up