Cyberpunk 2077’s launch was a bit controversial to say the least, mostly because the last-gen console versions were virtually unplayable and led to the game getting delisted from the PlayStation Store. Now, in a new video, CD Projekt Co-Founder Marcin Iwinski officially apologizes for the state of the game on consoles at launch, and provides further updates on when the next patches and free DLC will land.

Although the video is mostly directed towards console players, it does address PC players too as there is now an updated roadmap to show roughly when the next big updates will be ready as well as the planned free DLC, as well as the next-gen console upgrades.

In the video, Iwinski talks about how they are working hard on getting some major updates and patches to the game. The first of which will be landing within the next 10 days. However, since these are currently the focus the planned free DLC has been pushed back a little bit. You can check out the new roadmap below: 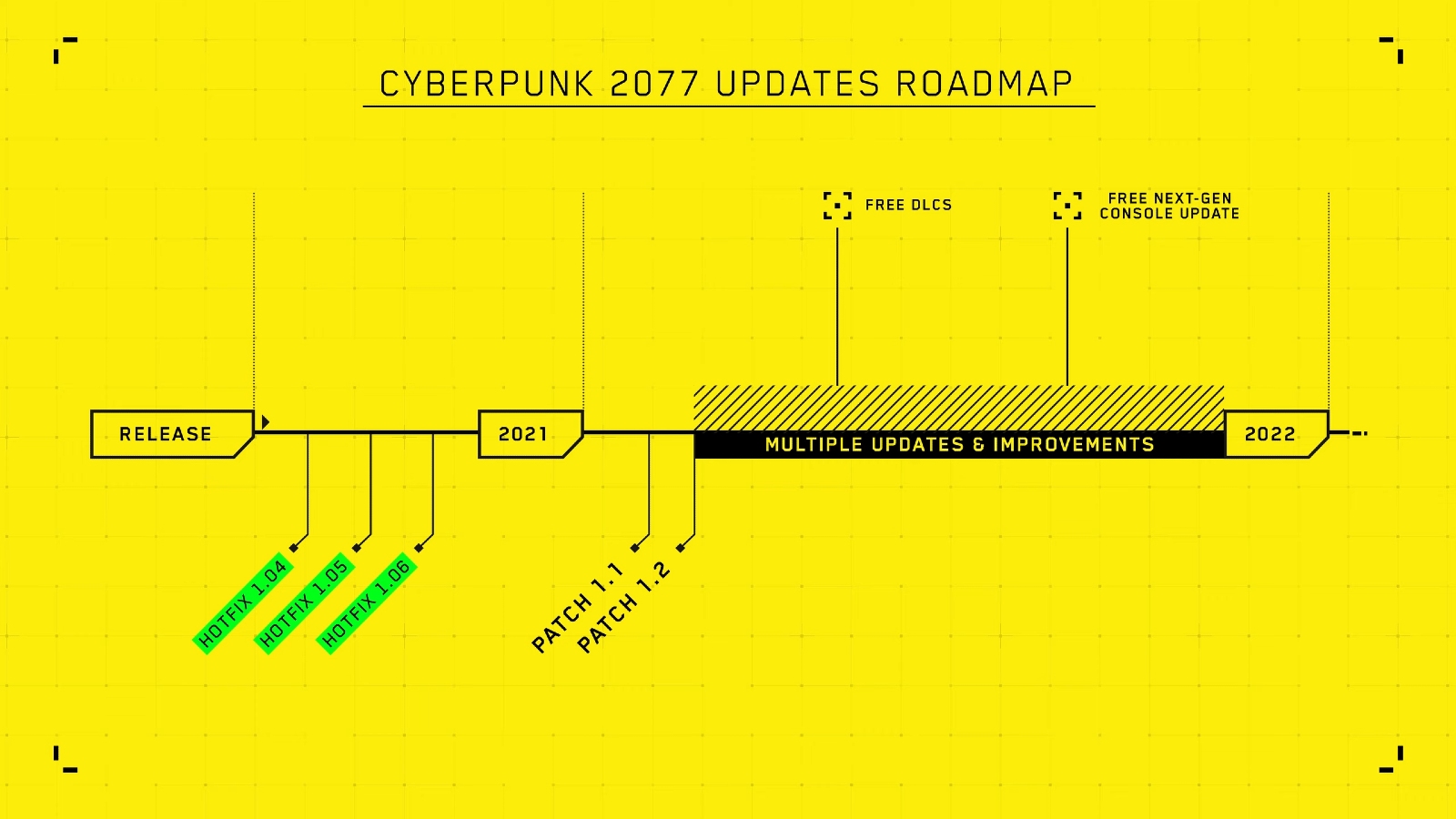 It’s not very often that you hear from a developer that the PC version was the baseline, with console versions being ported around that. Usually it’s the other way around where PC players get the short end of the stick.

So there you have it, updates on the next major patches and free DLC for Cyberpunk 2077. What do you think? Are you confident in CDPR’s abilities to bring the game back to where it should be? Or have you lost faith in them? Let us know your thoughts!

At this point i am happy i got refund on GOG.Come August/September,after all is silk,with all the Expansions and DLCs, i will be all over the game,but not like this,never again.

Glad you got your $ back

This was just "we are sorry we got caught" combined with "we are sorry we don't live in USA where we wouldn't be investigated" and with pinch of "forget about all the problems, lies and everything, FREE DLC COMING SOON", because who needs to actually polish the game and fix bugs, when you can add free DLC. Plus as soon as they mentioned great reviews, it was like, you aren't really sorry.

If they were really sorry they would have done the right thing and not lie to sell as many copies as possible. They would have ideally delay console copies or at least warn people about needing XBSX or PS4 Pro till it gets fixed and on PC it would have come out as early access. Instead they chose most profitable path and found out that being EA isn't as easy as they make it look like.

They got a grant from the Polish government for CP2077 so that's probably got something to do with the investigation. If you get money from the government for R&D and then still release a broken game, which they will then have a small association with, they'll probably come knocking to see what you've done with the cash and take action to dissuade other devs from potentially doing the same.

As soon as I heard "the game had great reviews on PC but dadada on consoles" I disliked and closed the tab. Honestly, this is getting a little infuriating. They're just telling lies in our face now.
Ironically, they're starting to become like the big-bad corpo antagonists in this game of theirs.

All I hear are excuses but no reasons, just be blunt and say WHY it was released the way it was and then get to work on fixing it instead of dodging the questions.

Its nice to see this but at this point its mostly damage control and pr stuff. Im not repeating how they KNEW console versions were catastrophicly bad, they even hid any footage from early reviews and they still sold it. "as it turns out our testing did not show big part of the issues you experienced while playing the game" So what the F they were testing? Also i like how they sidestep from pc version as well, it still have problems and it still dont have

all that cut content from what was promised talked before the launch, metro system, bounty system, braindead ai, wallrunning, etc. Time will tell but i seriously doubt it will regain any cut content. Also multiplayer is now officially delayed to 2022? if its not scrapped all together.

They've already started to sell the game at a discount on some pages (probably to offset the bad PR).
Think on GOG you can get it for around 40 USD.

As for the cut content, I really wished they didn't cut the wall running. Would have definitely made things more interesting.

wallrunning would take enormous resources to implement on a map like this. Can you imagine all the collision testing, all the surfaces that you need to make "wall-runable"? Mad task. It won't happen.

Yeah, I assumed as much.
I still wonder how much the wall running would have changed the game mechanics.

Honestly, it should've been a timed pc exclusive. The game is great on pc, a little weaker on the rp side of the rpg but with a 'pre-made' character it was to be somewhat expected. I'm looking forward to a future replay with a goty version.

It's half-bull this "apology".

I'd much rather he admit that he had to push the game out the door because delays are expensive (still gotta pay for marketing, any licensing, events, etc) and the investors were breathing down his neck to release before Christmas.
What we got instead is more BS about how the game was "performing well" and the PC version is great... Come on! Every single review that I saw on day1 (or prior) was riddled with bugs. They can't honestly have hired literal blind people to do their "game testing"....

On top of that... The "next gen patch" (lmao, I can run GTA VC at 10K res on a modern rig if I want - no patches needed) is planned for the second half of 2021... That's 6-11 months away. This is how far away the actual release is, because this is how much time they need to get to that point. Madness...

I won't defend them for anything else but CDPR did state that the Next Gen console version/patch wasn't going to come until mid-2021 long before the PC/Current Gen console launch, it was always intended to come at least 6 months later.

Well yeah, I wouldn't doubt that they know how much time they still need lol! Does not change my point in the slightest :D

Maybe im a fool, but i think they will fix ai completely, as well as 90% of the bugs in the game, i really want this game to be fixed because it is a very good game

I sure hope they will, as I'd like to buy it then :D
But the problem is that games are coming out like this and it's not normal. It shouldn't be normal.

Only way to stop that trend is to not preorder.

Yeah, people get thrown a skin or something stupid like that their way and they pre-order. Not like we can stop it...

Yeah thats cool and all but you only get one chance to make a first impression.

But his last album was titled 'Music To Be Murdered By', doesn't that sound like someone who's mastered the art of Zen to you?