Back when Nvidia unveiled the RTX 30 series laptops, mobile gamers rejoiced at the thought of the new Ampere series making its way to the laptop realm. However, excitement quickly turned to worry as it turned out that manufacturers could alter the power wattage of the mobile graphics cards, dramatically changing the performance of the GPU inside. Thankfully, a little custom work provides a decent 20% performance boost by upping the wattage manually.

In fact, since the manufacturers could alter the wattage of graphics cards quite significantly, this meant you could potentially find an RTX 3080 laptop that performs worse than an RTX 3060 laptop. That’s not exactly something you want to hear when you’re paying upwards of $1000 more for the best mobile GPU you can find.

This is nothing new for gaming laptops of course, as the same graphics cards can have a very different vBIOS depending on the laptop and manufacturer. But the reason why it is more useful here is because of the 28 different variations of RTX 30 series GPUs that can be found within these laptops. That’s a lot of variety, and again could find you paying much more for a worse graphics card in the end.

But with a little bit of technical know-how, some users on the Chinese Baidu forums managed to increase their Asus ROG Zephyrus Duo 15 laptop with a 115W RTX 3080 up to a 155W version instead.

The modders managed to do this by taking the vBIOS file from a separate laptop, the MSI GE76, which had a higher spec RTX 3080 inside of it, and then flashed the GPU inside the ASUS laptop in order to bring it up to a higher spec.

It goes without saying that this is not exactly something you should try at home unless you are a tech savvy professional, as this process could and most likely will brick your shiny new laptop that costs you thousands of dollars. So yeah, take this with a word of warning, but it is interesting to talk about nonetheless. 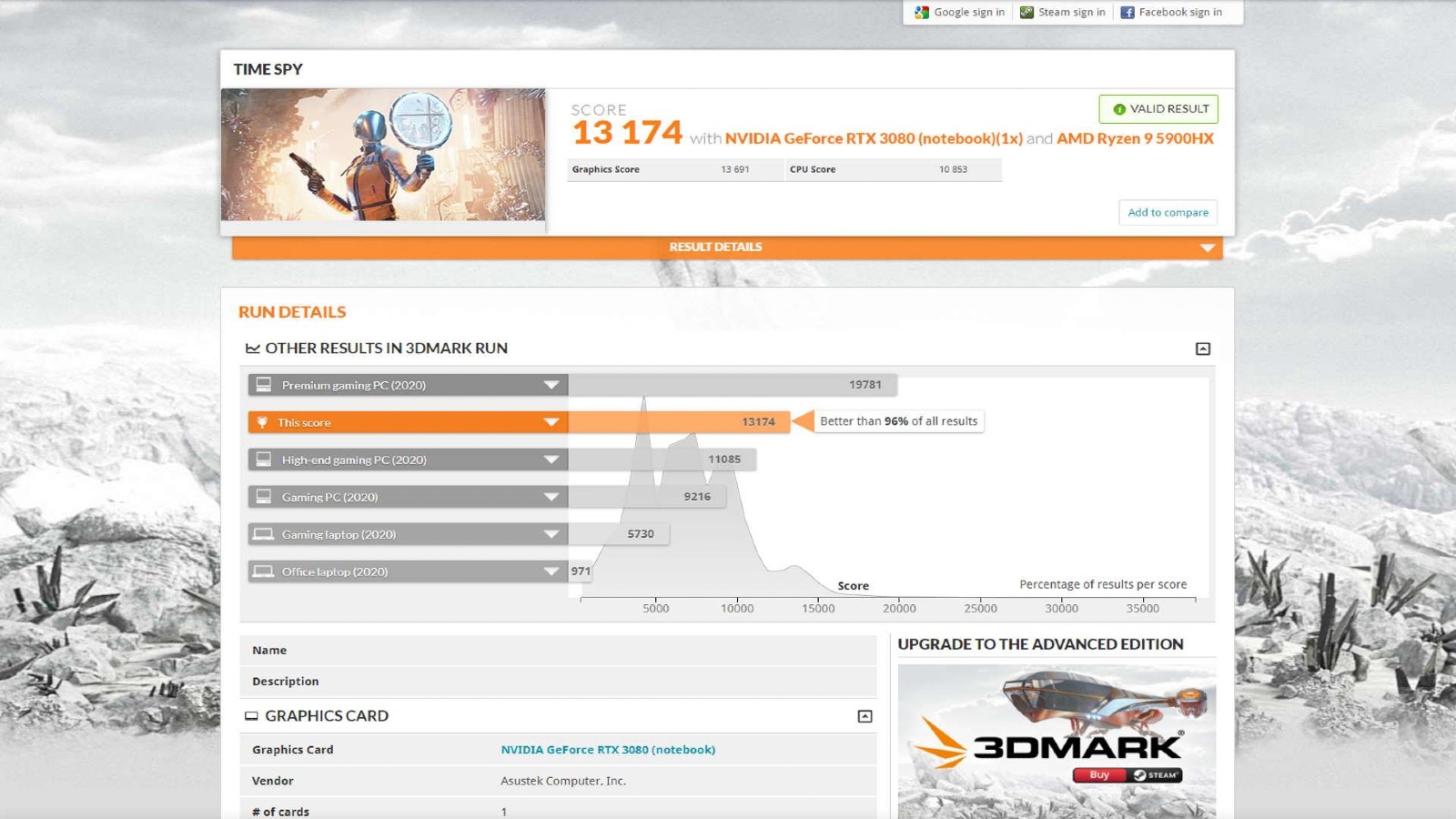 Since this ‘fix’ (I’m a bit hesitant to call it that to be honest) has come out, the ASUS ROG Zephyrus Duo 15 laptop has now dominated the top of the leaderboards in 3DMark for the RTX 3080 notebooks. In fact, the top 6 places on the leaderboards are from the same laptop. Comparing it to results from the same laptop prior to the vBIOS update, the top performer has got themselves a neat 20% performance boost. 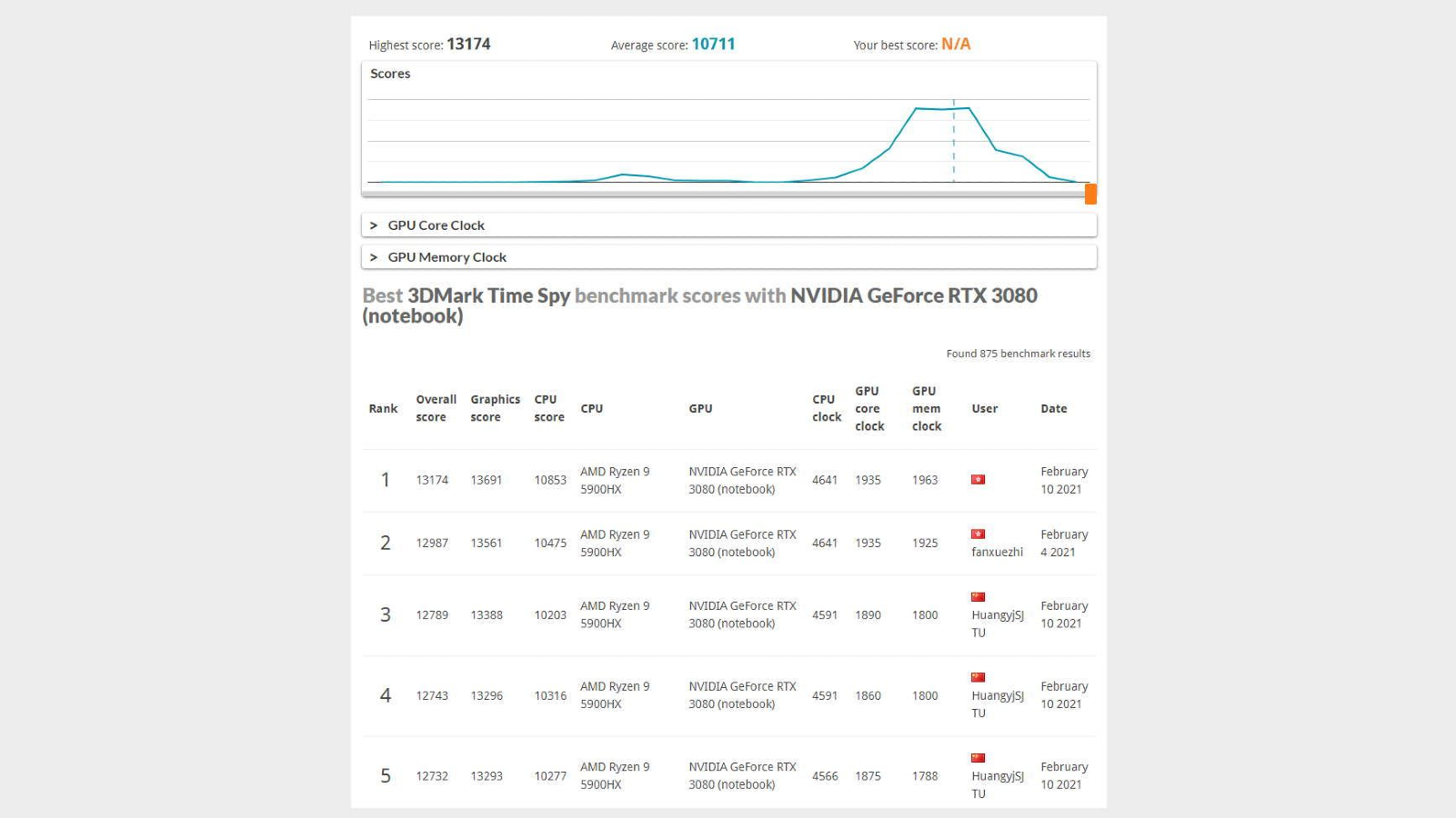 What’s interesting about this is that 3DMark reports the average temperature for the laptop during the benchmark was at 72 degrees C. That’s pretty hot by normal standards, but in terms of a gaming laptop that’s an acceptable temperature for sure.

The mystery then is why these GPUs were lowered in wattage in the first place. Presumably it was because of the recorded temperatures, but that figure above suggests the ASUS ROG Zephyrus Duo 15 laptop can indeed handle the updated RTX 3080 with a higher wattage just fine.

So who knows really, but once again this is not something suggested for you to do with your own RTX 30-powered laptop. That is, if you can even manage to get one with all these cryptocurrency miners seemingly buying up whole swathes of stock.

What do you think? Would you attempt the vBIOS update? Or is this something only for those chasing the top benchmark numbers? And why would ASUS lower the wattage if the temperatures remain fine? Let us know your thoughts!

Diablo 2 Resurrected will be getting Nvidia DLSS support soon

Question is, would you do it if you'd paid a ton of $ for the laptop?

You're a brave one.