The highly anticipated sequel to one of the most beloved RPGs ever has had some rocky development over the years, from numerous delays to losing significant talent on the project, things haven’t been looking great. And it seems like it has now reached the boiling point since Vampire: The Masquerade - Bloodlines 2 will no longer be launching in 2021 as Paradox searches for a new developer.

“We have made the hard decision that Hardsuit Labs will no longer be leading the development of Bloodlines 2,” the official statement reads, “which also means that we will not be releasing in 2021 as previously planned. Since we cannot at this time communicate a new release date, we've also decided to stop accepting pre-orders for the time being.” 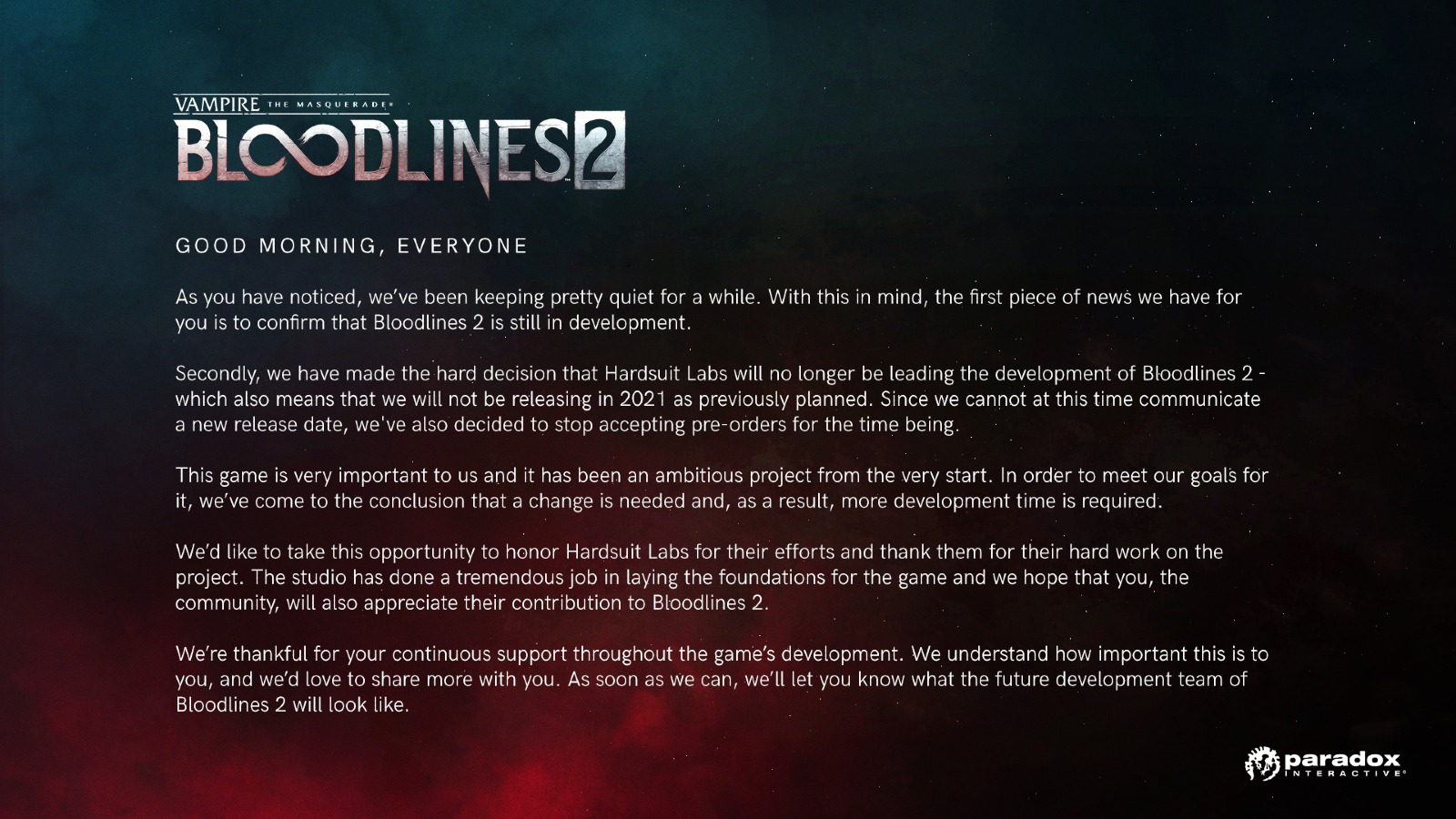 The good thing is that Paradox confirmed that Bloodlines 2 “is still in development”, though maybe saying ‘planned to still be developed’ would be more appropriate after losing their developer.

Paradox didn’t give a specific reason as to why the original developer, Hardsuit Labs, will no longer be leading the project, and instead said that “this game is very important to us and it has been an ambitious project from the very start. In order to meet our goals for it, we’ve come to the conclusion that a change is needed and, as a result, more development time is required.”

Paradox also thanked Hardsuit Labs for their work on “laying the foundations” for VTMB2, and hope that the players will “appreciate their contribution” to the game. That sure sounds like the next developer, whoever it may be, will be restarting the process from early on, possibly even starting from the ground up again.

If that is the case then it will likely be a very long time until we see the finished product.

What do you think? Are you still excited for Vampire The Masquerade Bloodlines 2? When do you think it will come out now? And who would you like to take over development? Let us know!

Are you still excited for Vampire The Masquerade bloodlines 2?

When do you think it will launch now?

Development hell to the bottom pit of its gonna be bad when it eventually comes out.

Well, not as much as I was. Troubled development and multitude of release dates and extensions is pretty big alarm sign about potential of game being either bad or only mediocre. It could still surprise, but I am not as much excited anymore. But I guess we will see when it comes out and gets reviewed. I am not pre-ordering it anyway. And if you did, it might be time to pull out, if you can.

Ok thats another warning flag. First they get rid of 2 developers, 1 of which was the original creator, and gave no reason for it. Either to the developers themselves or pubically. Now they are removing the studio creating it when it was apparently nearly finished last we heard of it only suddenly now they're changing the entire studio and possibly starting from the beginning again? Wtf something is clearly wrong and they're trying to keep quiet about it, which just makes them more suspicious.

Already pre-ordered the Blood moon edition! it's gonna be a good game, better the Cyberpunk 2077 I reckon!

Well, that was to be expected. The demo looked really poor. Given all the money lost, they'll probably turn it into a mobile phone game to re-coup their investment.