Valheim has been out for a while now and has skyrocketed to fame on Steam, wracking up some seriously impressive numbers for an Early Access title. But how well does it perform? And what kind of hardware do you need to play at its best? Let's take a look at the PC performance benchmarks for Valheim...

First of all, in this PC performance benchmark article for Valheim, we benchmark a range of graphics cards going from the higher-end RTX 3070 as well as the RTX 2060; to the lower-end R7 370; and the mid-range GTX 1060 which is the recommended GPU for 1080p High graphics settings.

Then we go through the FPS test results of each graphics card running at 1080p, 1440p and 4K screen resolutions. From there we can see the performance of the minimum and recommended system requirement graphics cards and consider how well optimized Valheim really is.

Valheim unfortunately does not include an in-game benchmarking tool, so for these results we spawned in a new world, ran around a foresty area for a bit and beat up some enemies. Considering the game is in Early Access and most of the most demanding moments are in the late game, we found this benchmark run to be pretty representative of your typical gameplay experience in Valheim.

Additionally, Valheim does not include any graphics quality presets, and so we had to create our own in order to standardize the benchmark results bellow. There are 4 main graphics settings in Valheim that can be toggled between Low, Medium, and High graphics settings (with 1 setting having an additional option for Very High), and the rest of the options are a simple toggle On and Off.

For our GD-created Low graphics preset we turned everything down to Low or Off, and for Medium we turned everything On or at Medium settings. Our final preset, High, Saw all settings turned up to their maximum quality option, including Very High for one of them. All results were tested using the DirectX 11 API.

With that in mind, let's jump into the PC performance benchmarks for Valheim...

(*Valheim's system requirements did not list any specific processor to use for either minimum or recommended, so we have chosen the best suitable components based on the hardware descriptions provided). 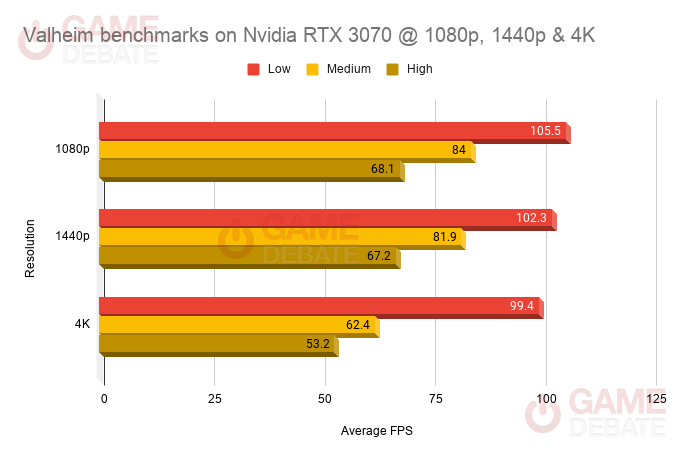 Finally at 4K resolution, the RTX 3070's FPS performance in Valheim has started to drop down a bit. Here the frame rate drops down to 53fps on the highest graphics settings, though is still certainly playable. If you want the most comfortable experience though then stay on Medium settings, or drop some of the most demanding graphics options first.

Overall, looking at the results above we can see that the RTX 3070 is perfectly suitable for playing Valheim at 1080p and 1440p on the highest graphics settings. At 4K you can still play on High settings but you won't get a full 60fps experience, but it is still playable and barely noticeable in this type of game. 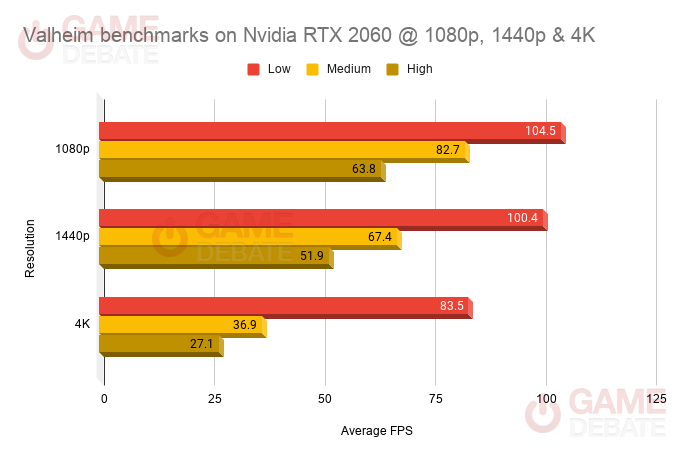 The FPS performance of the RTX 2060 at 1080p in Valheim is pretty good as well. This graphics card is still able to achieve over 60fps on High graphics settings, and so is perfectly suitable for playing at this resolution on the best quality options.

At 1440p the FPS dips down a bit for the RTX 2060 in Valheim but is overall still fairly good. Best performance is on Medium graphics settings but even on High settings the game is still playable and enjoyable.

At 4K the RTX 2060's FPS performance in Valheim is pretty poor, at least for the higher graphics settings. At Low settings this card is perfectly fine to play Valheim at 4K, but turning up to Medium does reduce the frame rate to a less desirable performance, still playable, but not ideal. On High settings the game because pretty uncomfortable and tough to play. 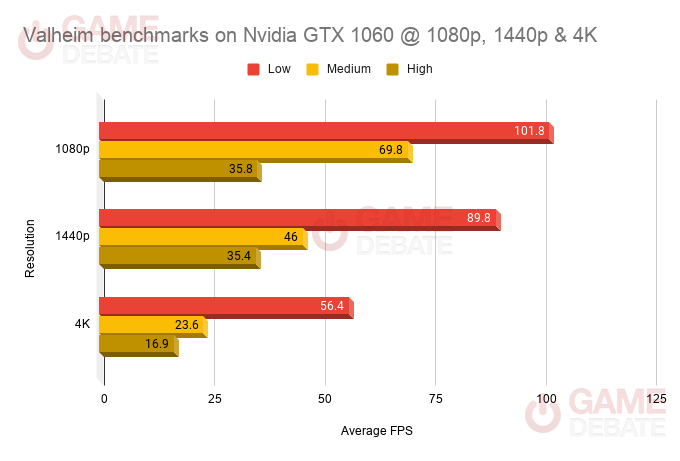 At 1440p the FPS performance of the GTX 1060 doesn't actually change that much compared to 1080p on High graphics settings, so if you were fine playing at 1080p with this performance then 1440p should be fine too. However, Medium graphics settings drop below 60fps and so the most comfortable experience at this resolution is Low settings unfortunately, though Medium is still pretty comfortable to play at.

At 4K resolution the GTX 1060's FPS performance is not bad on Low graphics settings, delivering just under 60fps. It is still playable at this performance, however moving up to Medium and High graphics settings results in an uncomfortable and less-than-desirable experience. High settings particularly were pretty much unplayable. 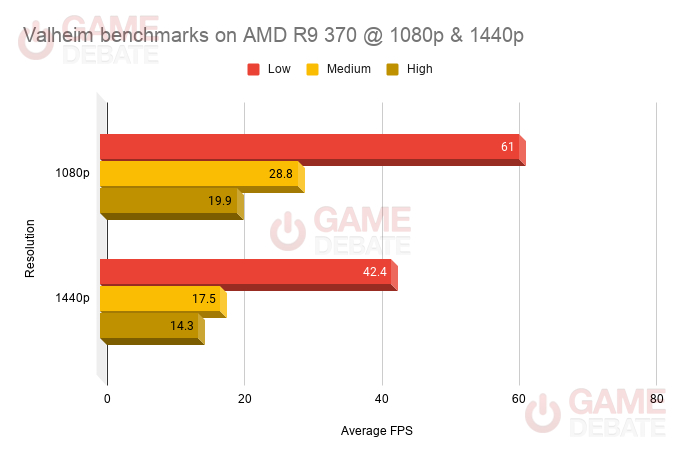 The R7 370's FPS performance in Valheim at 1080p is not too great. At Low graphics settings you get around 60fps which is perfectly comfortable, however moving up to Medium or High settings will drop below 30fps and is not the ideal experience.

Overall, looking at the performance benchmark results above, Valheim is a surprisingly demanding game even on the highest end hardware today like the RTX 3070. Performance can be a bit all over the place but generally high-end hardware will still be able to play on the best graphics settings on higher resolutions.

For mid-range hardware performance is a little disappointing, especially on the GTX 1060 which is unable to reach 60fps on the highest graphics settings even at 1080p. However Medium graphics are still a comfortable and enjoyable experience.

For low-end hardware like the R7 370, Valheim is best suited to turn the settings down to the lowest options for optimal performance.

If you want to play Valheim at its best then you will need some of the top-end hardware today in order to play at 60fps at 1080p resolution on the highest graphics settings. Mid-range hardware will still be able to have good performance but on Medium graphics settings, or on the Highest settings with a few options tweaked down a bit for optimal performance.

It's clear that Valheim still has some optimization fixes to go through during Early Access, and so we expect performance to get better in later updates to the game over the course of its Early Access period.

Of course we welcome any feedback from you guys and your own experience in Valheim with your own hardware so that we can all gauge a better understanding of how well our systems will be able to run Valheim.

The newly released Vulkan API makes full use of my GPU now (75-99% usage) and the frames stay locked at 60FPS/1080p (very occasional drops to mid 50's) with everything on High. Great improvement tbh. CPU usage went WAAAY down. Highly recommend using it.

Forspoken has been delayed again until 2023

God of War Ragnarok officially launches in November, no PC release date yet

The newly released Vulkan API makes full use of my GPU now (75-99% usage) and the frames stay locked at 60FPS/1080p (very occasional drops to mid 50's) with everything on High. Great improvement tbh. CPU usage went WAAAY down. Highly recommend using it.

I feel like that i7 is bottlenecking that RTX 3070, time to change that CPU i guess

At 1080p or low settings - sure. But then I'd be crying over my 5960X all the same if I cared about low or 1080p with a 30 series GPU. The beauty of PC gaming is the upgrades. It's much more natural (and cheaper...and easier..) to keep a CPU for longer and to just swap out the GPUs.
Benching on the top-end CPUs like the big tech youtubers do is also unrealistic for most people. If you get more fps than the benchmark said - that's only a bonus and a pleasant surprise, if anything.