The online mode for Ubisoft’s Watch Dogs Legion has been through some rough weather it seems, as the mode was originally set to launch in December last year but was delayed until early 2021. That date was then set for March 9th, but it turns out a critical issue with the PC version means the mode has to be delayed until further notice.

“We've identified an issue in the PC version that can cause the game to crash for players with certain GPUs,” Ubisoft said in a post. “In the meantime, we've made the decision to wait to  launch the PC version until this is fixed. We will communicate the new launch date as soon as possible.” 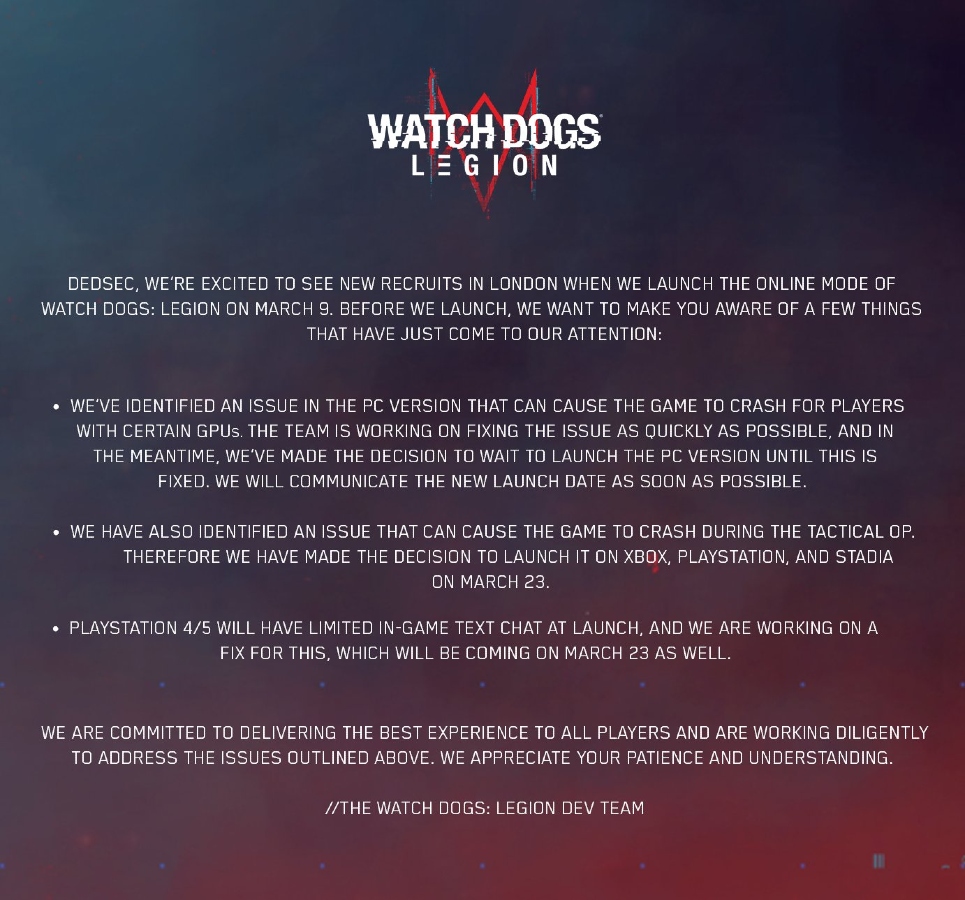 For Xbox, PlayStation, and Stadia players the online mode for Watch Dogs Legion is still launching on March 9th, but with the exception of Tactical Ops - a new co-op side mission in the online mode - which has been delayed until March 23rd also due to a critical issue that causes the game to crash.

“We are committed to delivering the best experience to all players and are working diligently to address the issues outlined above,” the post continued. “We appreciate your patience and understanding.”

What do you think? Were you excited for Watch Dogs 3 multiplayer? When do you think the online mode will come back to PC? Let us know!

Are you exited for Watch Dogs Legion multiplayer?

Not a multiplayer fan, so I'm happy with what I bought

Personally I just simply don't care about multiiplayer. So even if they would cancel it, I wouldn't care. But it is surprising how this time Ubisoft cares about bugs and all... It is almost like they saw what happened with CDPR on Cyberpunk 2077 release and were like, "how about no"... :-D

Some games don't need multiplayer. When will publishers/devs stop thinking in dollar bills and just focus on what makes a game fun..?

Calling right here, multiplayer is going to be canceled. I mean even if it will be released, i dont think there will be enough of active playerbase for mp? Looking at watch dogs 2 history in steamcharts it shows that peak player count was 18k and it was at launch, then quickly after couple of months it dropped to -3k and since then it fluctuated 1k-4k its just not enough of playerbase for any meaningful MP.

Wait, Ubisoft actually knows of a concept called bugs? And plans to fix them? What sorcery is this?

When the multiplayer becomes available i will buy the game.

You really care for it that much?

Yes i care very much, me and my friends will buy it to play together, we had so much fun with WD 2 multiplayer!!!

Not worth the wait, I was part of open beta.

I bought the game, played 20 hours and had to stop playing cause after a while when i loaded the game i had terrible fps. I tried to started a new and it was find but that was 20 hours wasted so i uninstalled it. Apart from that the game is bad. I regret buying it but now i know that i won't be wasting my money again on WD.

I run mine with ray tracing on. done it twice now.