As we have seen with previous leaks, the Microsoft Store has a habit of revealing certain products before they have been officially announced. This time we have a brand new collection to add to the list as the Tomb Raider: Definitive Survivor Trilogy is apparently on its way soon. 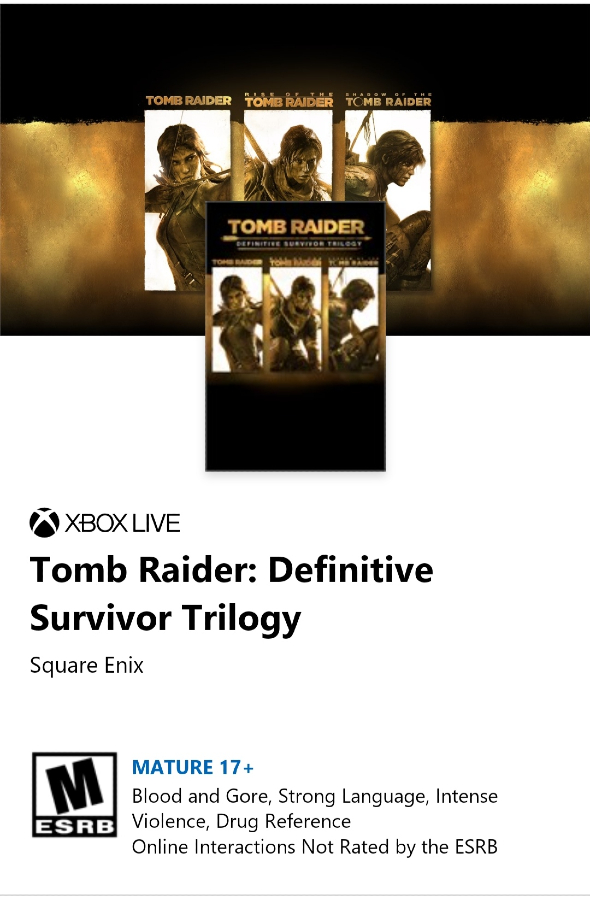 Of course, the official store page has already been taken down now, but before that happened some users online managed to copy the game’s description, which reveals some tantalizing information for PC players:

Luckily it seems like the first Tomb Raider game of the reboot trilogy is everyone's favorite, as seen by a poll we ran a while ago on the cancelled Tomb Raider remake, which saw 87 of you vote for Tomb Raider 2013 over 28 and 18 votes respectively for the other two games in the trilogy.

Other than that though it doesn’t sound like there are any new changes to the series like remastered visuals for the other games, or additional content. So it’s most likely just a way to get everyone excited for the Tomb Raider Netflix anime series that takes place after these 3 games.

What do you think? Are you excited for the 2013 Tomb Raider Definitive Edition on PC? What is your favorite Tomb Raider game from the recent reboot trilogy? And would you be interested in a 4th game in the series? Let us know!

Are you interested in a Tomb Raider Definitive Survival Trilogy?

Would you be excited for Tomb Raider 2013 Definitive Edition on PC?

The new tomb raider games are so boring and blad. Especially shadow, such a generic feeling and Lara has 0 or negative char development. I feel she gets more silly and immature with each game. Only 2013 was good. I hope they reboot this.

It got delisted lol

I lost interest the moment the MS store was mentioned.

The new Tomb Raider games are so good. I do not know if we are getting another one as Square Enix tends to put things on ice for a decade or so.

Agree with you there. I love the games

Very differing opinions vs what Lalitendudas thinks a few comments up lol!

People can have their own opinions but I absolutely love the new games and would love to see more of them...a lot more

Haha I didn't see this cmnt lol. Most people like these games, it's ok no prob. It's just that for me either u give a compelling story or you simply don't. But here they sit awkwardly in middle- story but extremely childish, immature, etc

I do wonder if that means they'll update the games with enhanced graphics but I'm unsure they will, especially for Shadow of the Tomb Raider which only came out 2018. I will say tho that it might need it for the weird prebaked lighting it uses compared to the other two, plus lara's model not being properly shadowed. Only mentioning it cuz I'm currently playing it for the first time and lara looks out of place compared to everything else xD TBH is seems partially like a downgrade in some areas.

These Games were awesome and i really hope this means that they are making a sequel or following it up. even though the story sorts of got wrapped up i would still love to to play more

What I want now is the Skyrim: Definitive edition with re-re-enhanced visuals, bundled with the previous 2 skyrims (Skyrim and Skyrim SE). After that, we could start remastering work on Far Cry 6 or whatever, while we're at it. People will buy the same game later again after a year or so if we tell them it's "remastered" or "definitive", right?