AMD recently revealed their upper-mid-range graphics card, the RX 6700 XT, which is launching next week. The GPU is aimed at 1440p gaming and some benchmarks have been leaked online compared to the closest competition that show some wins for rasterization, but generally worse performance in ray tracing.

That doesn’t really come as a surprise since AMD RX 6000 graphics cards tend to perform slower at ray tracing compared to their Nvidia counterparts. Partly because this is AMD’s first generation of ray tracing Cores whilst Nvidia is on their second generation.

The RX 6700 XT’s biggest competitors are the RTX 3070 and RTX 3060 Ti, and so the following benchmarks pit all 3 GPUs against each other. The first batch of results are for 1440p rasterized performance, whilst the second batch is for 1080p ray tracing performance. Before we jump in though let’s take a look at the graphics card specifications of each:

Now onto the official RX 6700 XT benchmark results for 1440p rasterization and 1080p ray tracing. Neither of the Nvidia graphics cards used Nvidia’s DLSS technology in the tests...

As you can see in the performance benchmarks graph above, the RX 6700 XT tends to trade blows with the RTX 3070 and RTX 3060 Ti, but generally performs better than the 3060 Ti. If we take the FPS achieved of each graphics card in each game and get the average overall FPS, we can see just how much the other Nvidia cards actually compare against the RX 6700 XT: 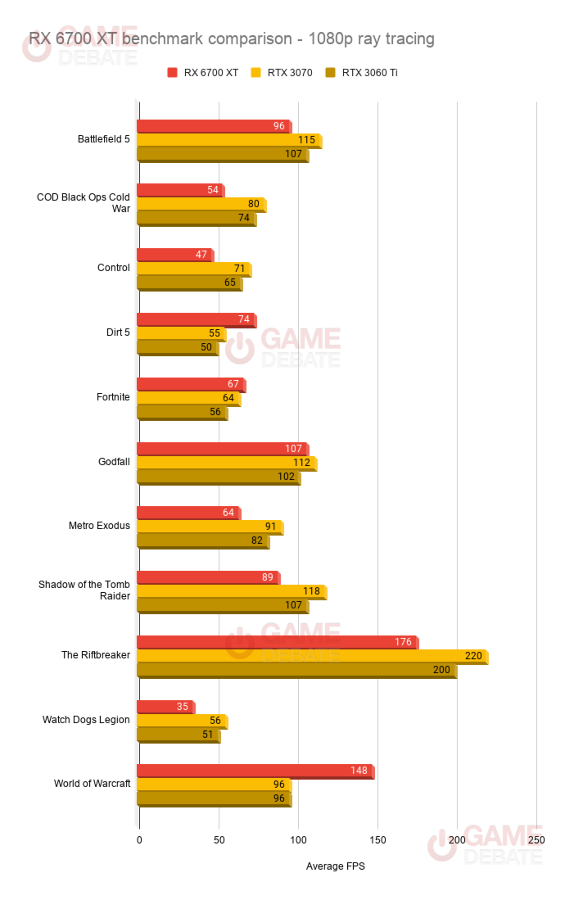 Looking over the ray tracing performance benchmark graph above, we can see the RX 6700 XT struggles behind the RTX 3070 and even the RTX 3060 Ti in most games. In fact, the only games where the RX 6700 XT seems to pull ahead are the titles where the game was already optimized for AMD hardware like Dirt 5, Fortnite, Godfall, and World of Warcraft.

Doing the same thing we did before by calculating the average overall FPS across all GPUs and games, we can see that the RTX 3070 ends up performing 19% faster on average in ray tracing titles compared to the RX 6700 XT. The RTX 3060 Ti also performs around 9% better at ray tracing here.

Looking at all the results above, the RX 6700 XT is a clear contender for the RTX 3070 in terms of raw rasterized performance. Most of the time this graphics card will be performing similarly to Nvidia’s own 1440p gaming GPU, with only a few instances where the difference between GPUs was substantial.

However, in terms of ray tracing performance the RX 6700 XT still struggles behind Nvidia’s 2nd generation of RT Cores, but thankfully not by a huge amount like the difference between the RX 6800 XT and RTX 3080.

Bearing in mind though the RTX 3070 comes with many Nvidia benefits including the ability to use DLSS technology. AMD is currently working on their own version of AI image upscaling called FidelityFX Super Resolution, but so far we have not seen any performance figures for that tech.

What do you think of the RX 6700 XT's rasterized performance?

What do you think of the RX 6700 XT's ray tracing performance?

Will rasterized or ray tracing performance be the deciding factor for you?

Based on these results which GPU is the better buy at MSRP?

Yeah ltt and j2c also show the 3070 clearly ahead of this card, which actually competes against the 3060ti, but again rt performance is just to low, making this card not worth buying.

yeah but then again in current pc market situation anything that is on the shelf for reasonable amount of money is worth :D but at msrp its just disappointing product.

EDIT: in my first post on gamers nexus results it was in cyberpunk not overall but still.

It's just way too expensive for an enthusiast gpu with such bad rt performance.

I wouldn't call it an enthusiast gpu, but yeah rt performance isn't good for the price

Umm, how is it that the RX 6700XT has better Ray Tracing performance in WoW compared to the other GPUs?

no DLSS and no good RT performance is a no go from me.

Fair.
For your use case at least

I kinda like those 12 gb vram tho, and i mean DLSS and RT is the future why should i keep track only in rasterization perf? not like we can buy new gpus anyway for regular prices

Well for my use case i NEED that big boi VRAM, since even if i don't max it out all of the time, i still max my 8Gb pretty often. So yeah, kinda gotta go with AMD on this one. Not the 6700XT though, i want 4K stuff. As for ray tracing, i am honestly not impressed with it in the games that i would actually want to play. But i am up for trying it out to see how it really is instead of looking at random pics of it.

It depends from person to person. I don't care about DLSS and raytracing, because both are gimmick for limited amount of games. Plus a lot of games get developed with consoles in mind and consoles don't do mindblowing level of raytracing performance, so I do expect it will take another generation at least till it will be must have. And DLSS is still limited to few games,...

... hopefully AMDs version will be more universal. But we will have to see. And for raytracing, like currently it is better than rasterization, but if they try, rasterization can get good enough. I mean there is bit of irony when best looking PS5 game is Demon Souls remaster, one that doesn't use raytracing. :-D But they are the future, they just aren't going to be must have as fast as we thought.

Nice, performance level is good and raytracing really isn't there yet to be required, so rasterization matters more. But the thing is... 3060Ti is like 91% of performance performance of RX6700XT, while costing 83% of the price... So I would still say it does nothing to dethrone value of 3060Ti. Even if it is on overall average about matching 3070, while being few percent cheaper. Just saying,...

... it isn't bad, but it is either go for the VRAM or raytracing and other nVidia features, if you care about them. And while there is nothing wrong with that, that is just it, it is not aggressively competing, it is just slotting in between 3060Ti and 3070 to provide alternative, not really much better value. So I am like, meh, even if it has few things going for it. Dunno if it is just me.

While the focus is on the 3070 and 6700XT i HAVE to give props to the 3060Ti for being just marginally worse than both of em. The prices are still whack even at MSRP, cause im comparing to who knows how long ago. But the overall conclusion is that the 3060Ti is more worth it, than both of these, or so i think. So if you decide to get any, if any are ever available for you, think about the worth. Are you gonna pay 100$ more for 9-10% more performance per average?

Well . . . im gonna wait on the actual reviews for more on that. These benchmarks so far have only been generally in 1440 and Ray Traced 1080p

Okay, i have to eat my words a little bit, previously i said that 6700xt will be between 3060ti and 3070 but apparently 6700xt going head to head against 3070, thats nice. But as ray tracing goes... ehh not sure on that one, maybe in 1-2 years when devs will be more familiar with rdna2 ray tracing then we should draw final conclusions on its RT perf, because now what i see is amd and nvidia outperfoms only on their own games, amd performs well on amd games and nvidiaon their

But then again if we need to wait 1-2 years for your current hardware optimization on RT performance then does it even matter? Also we need to account that next month(if im not mistaken) we will get resizable BAR on rtx 30 series so again point, but in the end i dont think it matters because both cards are in the same perf ballpark, so it mostly comes to ray tracing perf, driver stability, vram and features (price is different matter in this day of age)

Considering the extra features, such as DLSS and RTX Broadcast for streaming/calls (I use it when gaming with friends or when talking to clients so they don't hear anything but my voice) - Nvidia stuff is still a better buy. Some people will just want a barebones experience as cheaply as possible - AMD is suited for those people.