Nvidia recently launched an Unreal Engine 4 plugin that allows for easier integration with their AI-upscaling technology called DLSS. In fact the company has shared some interesting performance figures for some upcoming games using the DLSS plugin.

The upcoming System Shock Remake as well as the indie title The Fabled Woods have both announced DLSS support and the benchmark numbers are pretty impressive. Crysis Remastered also recently added DLSS support thanks to the plugin.

“The Unreal Engine 4 plugin makes light work of adding NVIDIA DLSS to your game,” said Matthew Kenneally, Lead Engineer at Night Studios, developer of the System Shock Remake. “In fact we dropped it in over the weekend. Bringing System Shock to a new generation of gamers has been a labor of love for our team, and the impact NVIDIA DLSS will have on the player’s experience is undeniable.”

That statement was also reiterated by Joe Bauer, the Founder of CyberPunch Studios who are developing The Fabled Woods:

Looking at the official Nvidia first party benchmarks and the performance numbers are pretty impressive, with the System Shock Remake more than doubling the frame rates on various graphics cards, allowing even the RTX 2060 to achieve more than 60fps+ at 4K resolution on Max graphics settings: 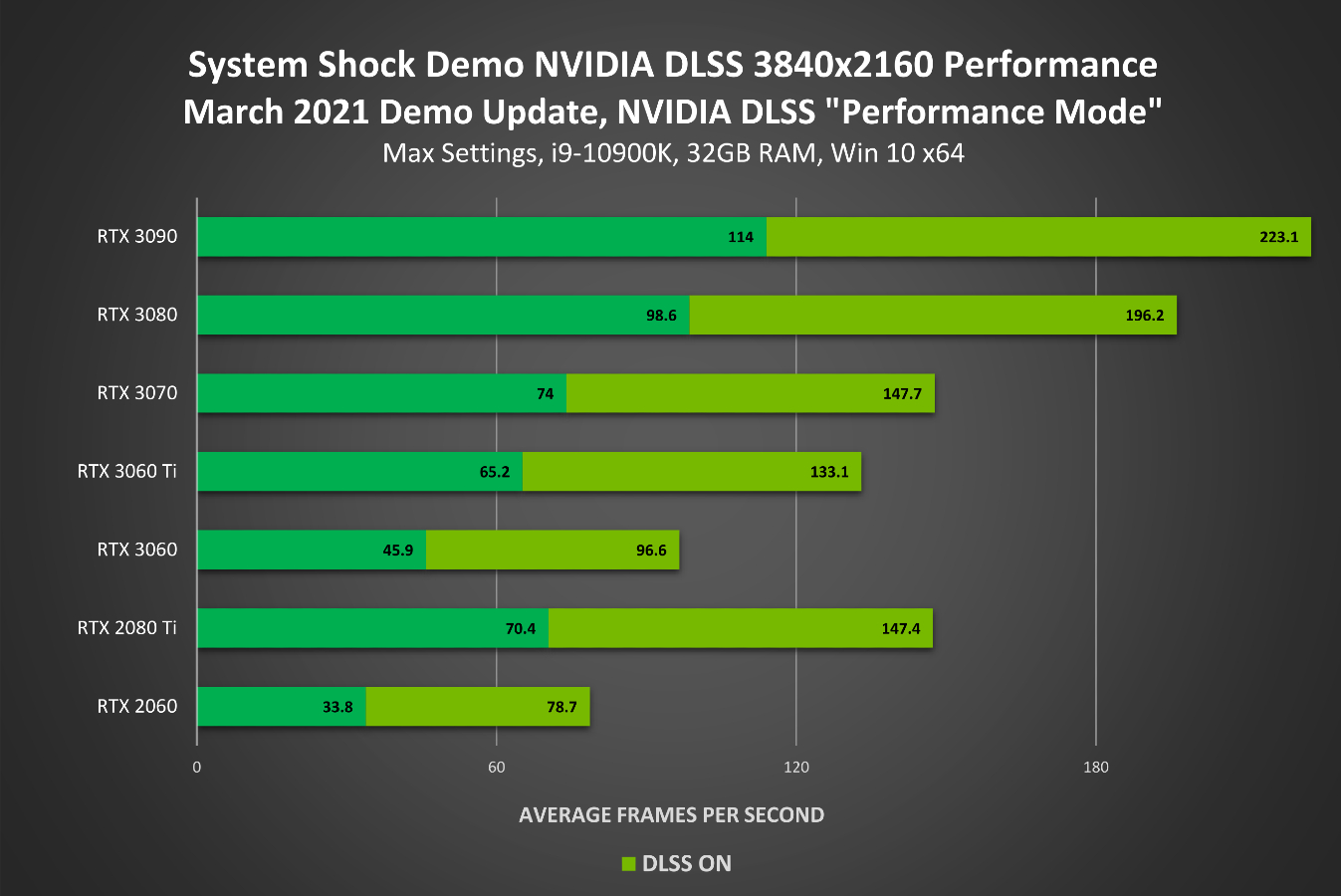 For The Fabled Woods, performance seems to be very demanding, but with DLSS the frame rate jumps dramatically for all GPUs. The RTX 2060 previously achieved just 12.6fps at 4K on the Epic graphics settings and ray tracing enabled. But with DLSS, this shot up to a playable 31.5fps. 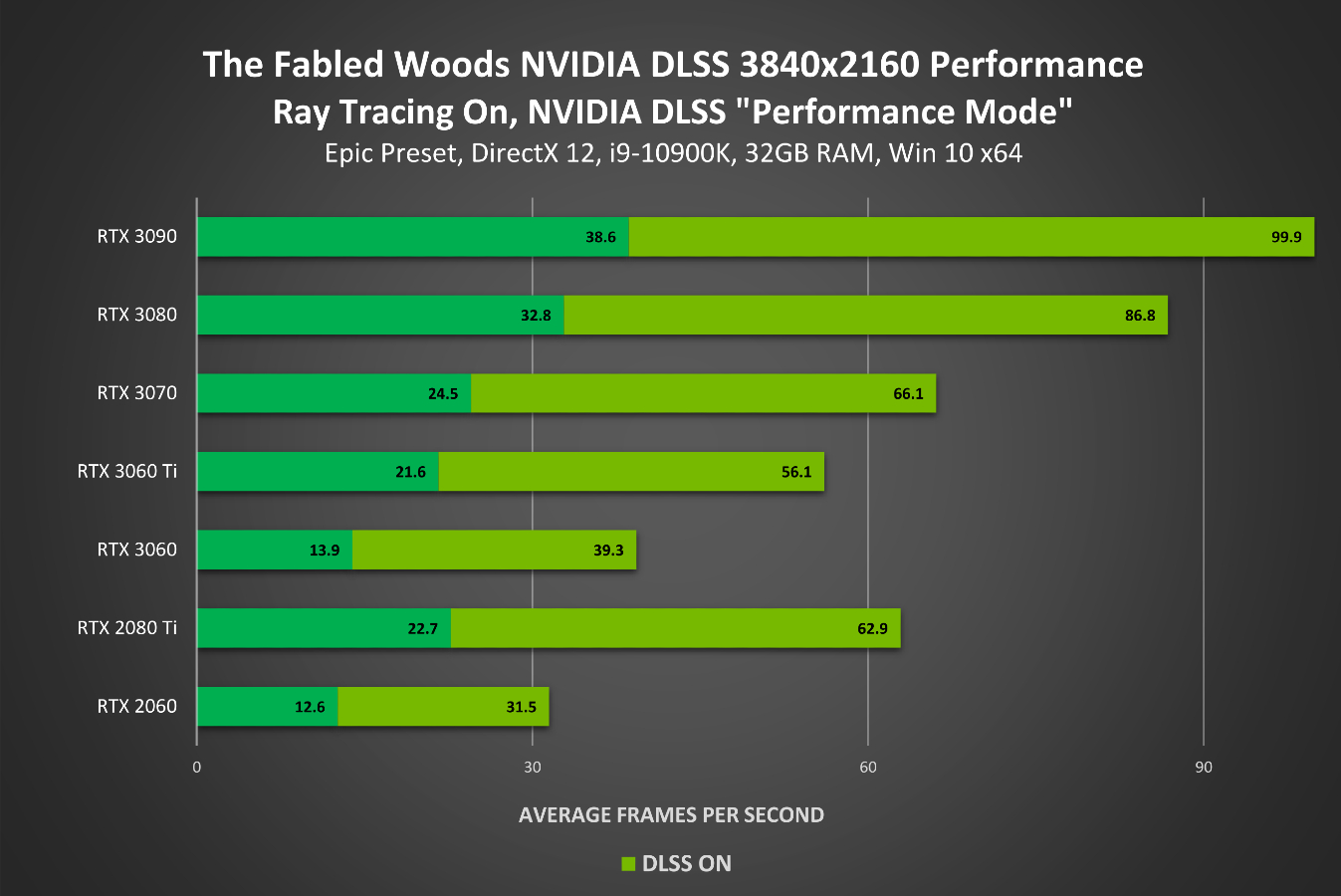 So it’s clear that the DLSS plugin is making light work of adding support into developers’ games, and significantly increases performance whilst also retaining image quality (and in the case of the System Shock Remake, seems to actually improve image clarity).

Nvidia also mentioned that the list of DLSS officially supported titles has now grown to 40 games, but teases that there are “many more implementations” for games that have yet to be announced, with more info “released in the coming weeks and months.”

What do you think? Are the performance benchmarks above impressive? How do you feel about DLSS implementation at the moment? Do you use it in games that support it? And what UE4 games would you like to see DLSS support added? Let us know!

Are you excited for more games with DLSS?

Do you use DLSS in games that support it?

DLSS has been a massive game changer. It almost feels like Nvidia shot themselves in the foot because the performance upgrade is so massive in games that support it (especially if you don't want RTX) that it feels you are running a few generations ahead.

I definitely am happy to see more games getting support, definitely good news for DLSS, which got actually good since 2.0. Hopefully AMD also makes their version good and hopefully even more open and compatible. As long as they can do visuals that look almost like native resolution, there is no reason not to turn DLSS on. As for me, no DLSS for 1070, maybe one day, but I guess not today.

death stranding video but to be honest the quality improvement that is seen at really high resolution is mind blowing and the FPS increase in like Hot Cheese on an already fully loaded pizza so hell yeah!!! RTX looks good no doubt about it

I dont use DLSS because i cant :/, but definately RT and DLSS is the future, hopefully AMD can keep up with nvidia

Hopefully this provides the kick in the ass AMD needs, each month they take the more they get left behind.

Yeah, these value-added features on Nvidia's side (broadcast, DLSS, raytracing, etc) more than make up for the increased cost of cards over AMD.

That's why I stopped being brand loyal when it comes to GPU's. I'll whatever gives me the better performance or what's on sale.

Thats what a good customer is, we all should follow that thinking but sadly a lot of people are just braindead and stick with one company and even defending it when it fcks it up

I don't defend Nvidia when they mess up, unless I don't consider it to be a mess up (like the whole miner thing, because I mine as well). That being said, I'm kinda locked in with Nvidia professionally because of CUDA, so that's another story entirely in terms of being a customer.