It’s March 18th, which means we’re back at another round of trying desperately to buy a graphics card before anyone else as AMD’s latest RX 6700 XT graphics card has officially launched today. But some official third party benchmarks have been released, which shows the GPU trailing slightly behind Nvidia’s RTX 3070.

Both the RX 6700 XT and RTX 3070 are mostly aimed at 1440p gaming in the latest titles, and both have ray tracing capabilities. However, none of the benchmarks shown below were tested with ray tracing enabled, so these are pure rasterization results we’re seeing, which is arguably what most people are interested in.

The benchmarks were also done at the highest graphics quality in a wide variety of games, mostly done at 1440p resolution, without any form of DLSS or ReSize BAR enabled. The 11 games tested on are as follows: 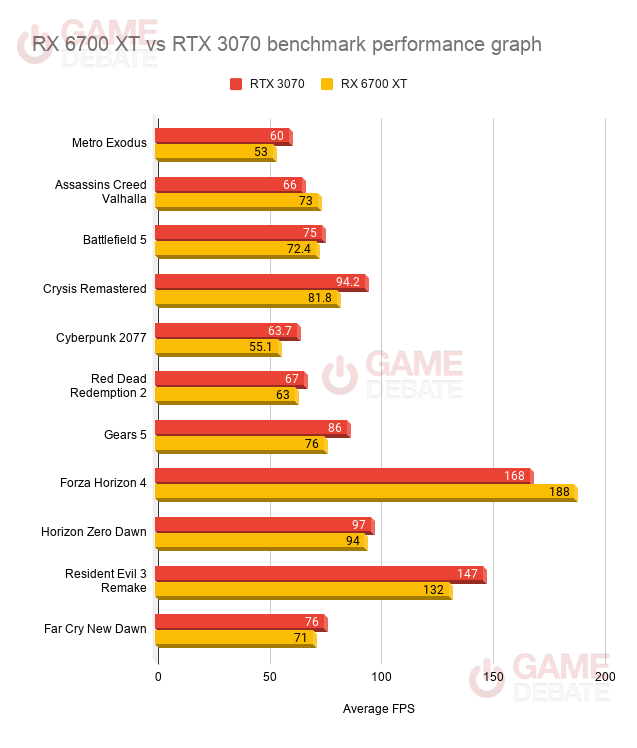 As you can see in the performance benchmarks above, the RX 6700 XT mostly comes very close to the RTX 3070 in terms of performance, but generally sees weaker performance. A couple games are more suited towards AMD’s hardware like Assassins Creed Valhalla and Forza Horizon 4, with the latter seeing some big wins for AMD there.

However, if you take the average FPS from all the games listed and compare them to each other, we find that the RX 6700 XT comes in at around 95.94% of the RTX 3070’s performance, which isn’t bad considering the price point.

The most interesting difference will come when AMD releases their FidelityFX Super Resolution technology to rival Nvidia’s DLSS, which will be arriving on PC sometime later this year, and will hopefully bring with it a large performance boost for AMD RX 6000 graphics cards. That may well be the deciding factor for some people, as it could put the RX 6700 XT in the realm of 4K gaming quite easily if it manages to see the same or better performance benefits over DLSS.

What do you think? How do you feel about the RX 6700 XT’s performance? Are you thinking of getting one? Let us know!

What do you think of the RX 6700 XT's performance?

I find 6700XT bit boring card in a way. Like don't get me wrong, performance doesn't disappoint, it really is price that kind of kills the joy here... Instead of aggressively competing, AMD just looked at stack, looked at performance and slid it in where you pay almost 3070 price for almost 3070 performance. 12GB of VRAM is great,but if we talk MSRPs,I would be more tempted to save and get 3060Ti.

But don't get me wrong, it isn't bad, it just needed more aggressive pricing to make it great. So it isn't great either, it is just ok. That is of course if you can actually find it at MSRP or in stock at all. At overpriced market, I don't even care how much it costs, I am not paying insane prices. But I guess time will tell if AMD was talking truth and they made more of them.

This gpu reminds me of the rtx 3060 12 gb, really meh performance specialy if you take lack of dlss and good RT performance

From what i know. It matters a lot , what games you are running. Some games run better on Nvidia and some on AMD.

Does it even matter? Both are and will be OUT OF STOCK, so what...

all AIB cards here in canada are listed $300-400 over its $649 CAD MSRP and of course no stock, aboslute joke of a situation.

Yep just as i said it would perform between 3060ti and 3070(being closer to 3060ti tho) and not better than 3070 unlike amd wanted us to believe with their slides. Its okay card but msrp is still too high should have been 400-430$ card instead because it lacks ray tracing perf and features.

Not everyone needs ray tracing and still not enough games that support it. And why on earth you are even talking about msrp if you won't be able to get it either for msrp nor 800-1000 dollars

Because discussing real price is useless as we all know most people cant even buy them. Besides sometime in the future it will get better and msrp will be much more important by then. Also if you dont care about ray tracing then fair enough but with dlss its quite feasible right now and its important for many people as well so yeah thats that...