Humankind has been delayed to August 17th 2021

The Civilization series has long reigned as the supreme historical 4X game for a long time now, but Amplitude’s upcoming Humankind is set to rival the series that started all the way back in 1991. It was supposed to launch on April 17th this year, but has now been pushed back to an August release date.

Humankind has officially been delayed and will now release on August 17th 2021 in order to give the developers more time “to further polish the game for a great day one experience,” as well as improving on the overall “pacing, balancing, diplomacy, accessibility, and AI” and more within the game.

The developers recently released a video thanking the community for the feedback given on the latest Lucy OpenDev (a sort of Early Access/Beta for the game for players who have already pre-purchased it):

“After taking stock of your feedback, of where we are with the game, and where we want it to be when we release, we have decided to postpone the release until August,” the developers said in a blog post. “We agree with you all, the game will be incredible with a little extra time, and we think we are lucky to have passionate fans like you who support us up in that decision.”

It’s always fun to see some actual numbers in games like these, so thankfully Amplitude released some pretty bonkers numbers regarding the latest Lucy OpenDev: 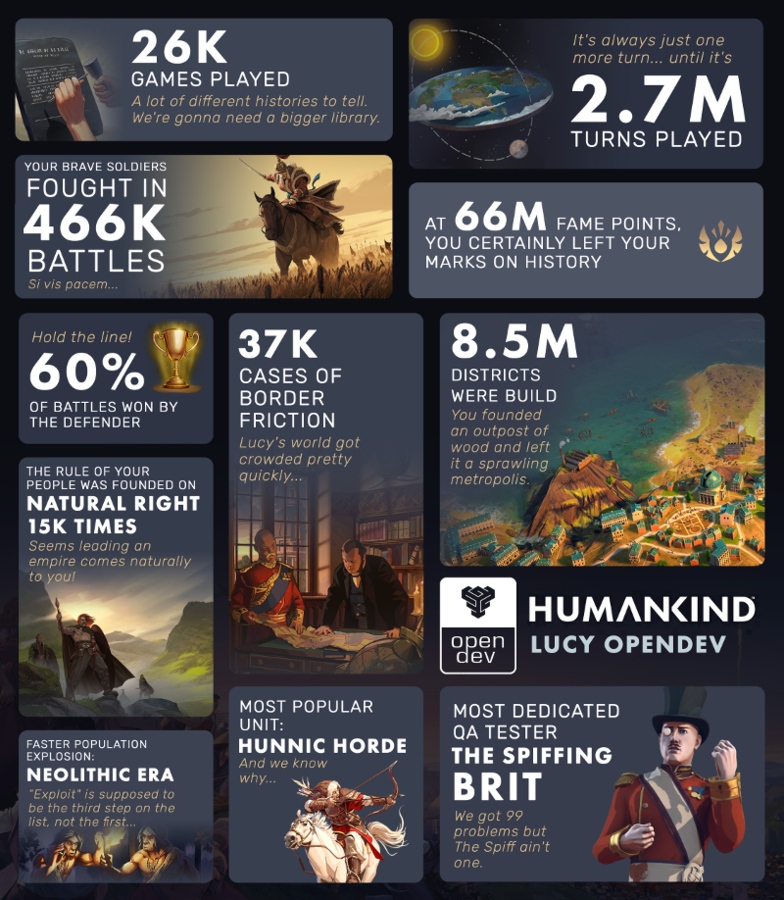 Over 26,000 games were played during the period, with over 2.7 million turns played. That’s pretty wild in comparison to the Civilization series, which would definitely turn up higher numbers in the same period, but it’s still impressive for a new kid on the scene.

Are you excited for Humankind?

Shame, i was looking forward to this one...

humankind was delayed due to the covid-21 pro

oh so we have been in beta till this point?