Later this year, AMD was expected to release their new line of Ryzen 6000 processors based on the Zen 3+ architecture. The series was just supposed to be a refresh of the Ryzen 5000 Zen 3-based lineup, but rumors are pointing towards AMD cancelling this year’s offering due to the global chip shortage and instead focusing on Zen 4.

The rumors come from unnamed sources that say the Zen 3+ lineup has been removed from AMD’s roadmaps. The Ryzen 6000 series (codenamed Warhol) was apparently supposed to release in Q4 2021, and bring a modest 3-10% performance increase (5-7% average) as well as a minor increase in clock speeds over the Ryzen 5000 series. 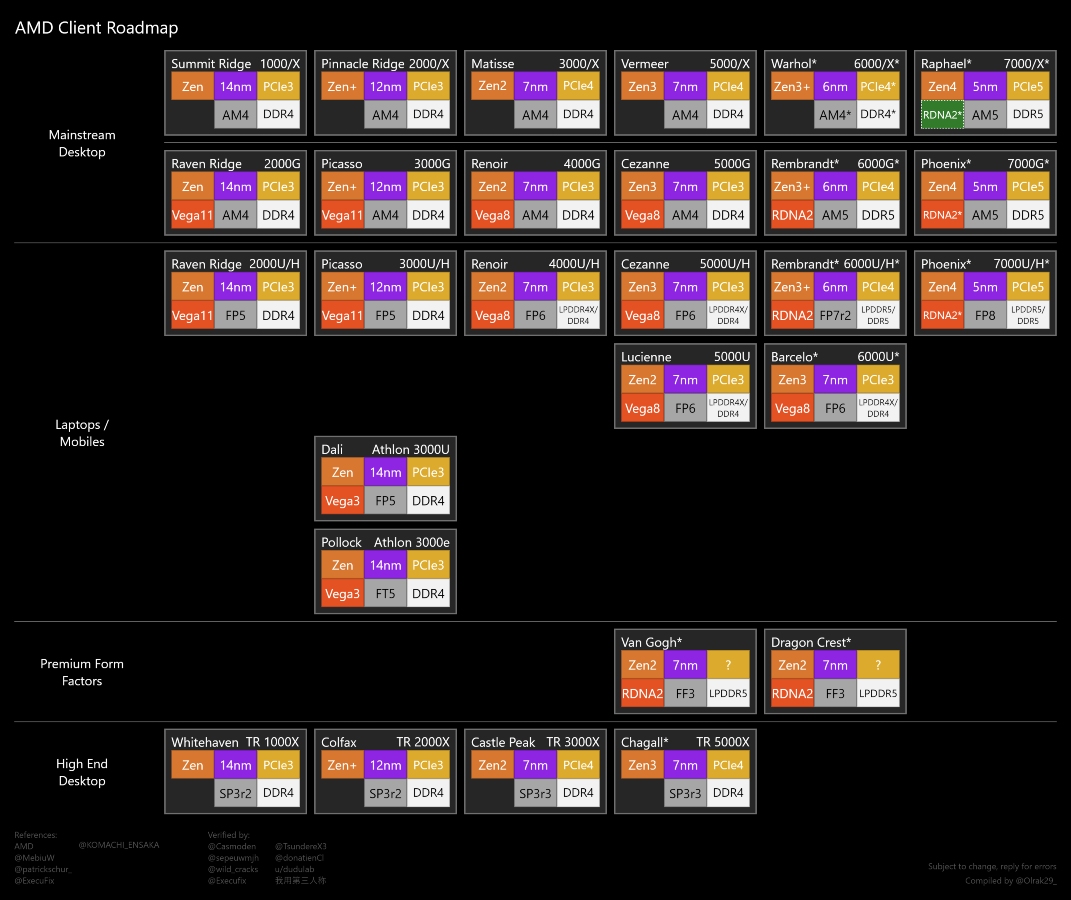 Instead, AMD is now reportedly focusing on their Zen 4-based lineup to launch in 2022, as the current global chip shortage is already affecting AMD’s Ryzen 5000 series and launching another series will only add to frustrations when users won’t be able to buy them (only recently have we seen the Ryzen 5000 series returning to MSRP, starting with the Ryzen 7 5800X).

However, if this rumor is true then it is very early, so AMD may still bring out their Zen 3+ lineup later this year, as recent internal roadmaps still showed the lineup planned for launch this year. But considering that Intel may have a head start over AMD later this year with support for next-gen technologies like PCI Express 5.0 and DDR5 memory in their 12th Gen Alder Lake series, if AMD starts focusing on their Zen 4-based platform early then they could get it out the door quicker than previously expected.

What do you think? Were you interested in the Ryzen 6000 Zen 3+ series? Would this be a good idea from AMD? Have you recently upgraded to Ryzen 5000? Let us know!

Is this a good idea for AMD?

Yeah it's a good idea if they skip Zen3+

Zen 4 with RDNA 3 for mid 2022 is the way to go even with the pandemic and the shortages.

Well, since my i7-4790 hasn't failed me yet I guess I still have time to wait. Hopefully the CPU market will stabilize again by the time it gets too slow.

Yeah your rig is well balanced, you could even get one more gpu upgrade, like rx 6700 or rtx 3060

Honestly i think it was canceled (though it was never really announced in the first place) due to lack of competition and the whole motherboard/chipset/am4 support pain amd had rather than shortage. They said that am4 platform support was until 2020 and it seems that it would be logical for 6000 series to go for new socket, new ram version and start fresh.

Don't see any problem with this. AMD is doing awesome and the 5000-series should be fine for a while longer. I'm currently thinking of getting a 5800X or 5900X for my next upgrade.

I'd love a 5950X, but knowing it's the last AM4 socket CPU series and having only dual-channel on it makes it a hard purchase to pull the trigger on, as I don't want to be stuck in a dead-end upgrade path again.

Yeah for multi gpu and workstation stuff HEDT would serve better imo though if you dont need extra pcie lanes and extra ram bandwidth 5950x can be an amazing package for work, gaming, basically anything.

Well, currently I have an M.2 drive, 2 GPUs at full 16x links and an add-in USB 3.1 card, with potentially more add-ins down the road. So far my i7-5960X keeps up with everything, which is awesome. A CPU with 1/2 to 2/3 of the lanes would probably not allow me to run everything as smoothly + a dual-channel memory controller would make my RAM slower, so I'd need an upgrade. Lots to consider, as I don't run a typical system.

Honestly if you are doing fine with current cpu, why change it? If thats the case for you i would just wait for ddr5 platform from either amd or intel

Forgot to mention I also have 6 drives beside the M.2 in my PC, as well as a bunch of USB3 stuff, which gobbles up that PCIe bandwidth.

Anyway, yeah I'd like to see if I can stretch out till DDR5 becomes a good choice, but even though I try to move as much as I can towards GPU rendering of my 3D work - sometimes there are things that I need the CPU for, which then feel a bit slow now. Games are also showing the need for something faster, the 3090 could deffo do better in some scenarios (like CP2077), but I tend to just use higher resolutions to game.

At 1788 (with my OC) vs a smidge over 2000 CB R15 score my CPU is not far from a 9900K, for example, and newer chips aren't THAT much faster either - certainly not "double" lmao. Not that it matters when I don't do 1080p and barely even 1440p. It matters for work, of course, which is my main consideration for upgrading at this point, as the new chips not only come with better clocks and IPC, but also more cores. I've done a decent job minimizing my reliance on CPU-only rendering, but it's still the brain and will need an upgrade at some point.

uhm 9900k is like 3 years old? both 11th gen and zen3 have significantly higher single thread speed,5960x overclocked is basically 4790k but with 8cores and 16threads and while it is okay for todays standards its nowhere close to newest stuff. Besides once 9900k is overclocked to 5.3ghz it hits around 2230 score in cinebench r15 so if you compare both overclocked its fair bit faster still, not to mention significantly lower latency between the cores for gaming performance

You speak as if the 9900K is complete trash by now. Anyway, it's just something I used because I don't remember my single core score, so I can only compare 8C/16T CPU scores to gauge the speed roughly.

Ok, so to humor you I just looked up an 11900K score on R15 - 2515, which puts it at a square 40% over mine. Seems big on paper, but considering that most of my gaming is GPU-bottlenecked at 99-100% GPU usage - not that impressive OR useful. And still VERY short of that magic "double" you claimed initially. You're giving CPUs a little too much credit in terms of how they evolved over the last decade...

Could I use a better CPU? Sure. Would I notice the improvement? Of course. Would it feel massive? In many cases I might not even notice (gaming).

I said around double single core performance because i looked up in cpu-z stock vs stock, 5950x scores 660 and 5960x scores 360 thats 83% improvement, sure you can go that route, with your situation and configuration, but i had in mind stock vs stock and besides cinebench is not the only benchmark there is :)

I'd be hard-pressed to find anyone who bought a 5960X and not overclocked it, so I'm kinda ignoring that lowly stock of 3Ghz altogether. The 5960X OC's too well for it to ever be running stock - that's a waste of CPU power and money xD