Nvidia’s upcoming Ti variants of some of their enthusiast graphics cards in the RTX 30 series are highly anticipated, not only for performance but for the prospect of more stock available at launch. But some retailers have jumped the gun already and listed the GPUs early with projected prices, and the rumored release dates have been pushed back once again.

We’ve had rumors of the RTX 3080 Ti and RTX 3070 Ti come and go recently, with the latest information stating that the official announcement and launch of both cards has been pushed back once again. Now they are said to be announced on May 31st, with a launch for both sometime in June.

The specific launch date has not been revealed, but product reviews are apparently going up on June 2nd for the RTX 3080 Ti, with reviews for the RTX 3070 Ti coming a week later on June 9th. Considering how Nvidia has scheduled reviews and launches recently, we can expect them to release sometime in the first week from reviews going live, likely even the next day.

But the most interesting part is that some online retailers in New Zealand and Australia have seemingly posted early listings of the graphics cards, with the RTX 3080 Ti projected to cost anywhere between $1338 and $2257. 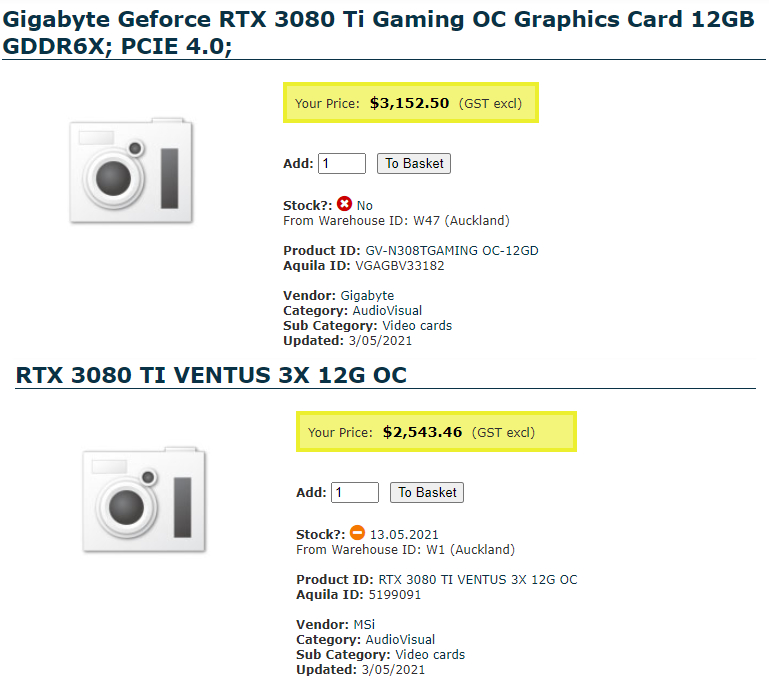 GPUs have been increasing in price for a while now, mostly thanks to the global chip crisis which has seen limited stock available whilst demand is still extremely high. On another retailer’s site the RTX 3080 Ti Eagle 12G and the RTX 3080 Ti Vision OC 12G have both been listed for 1733 AUD (around $1338). 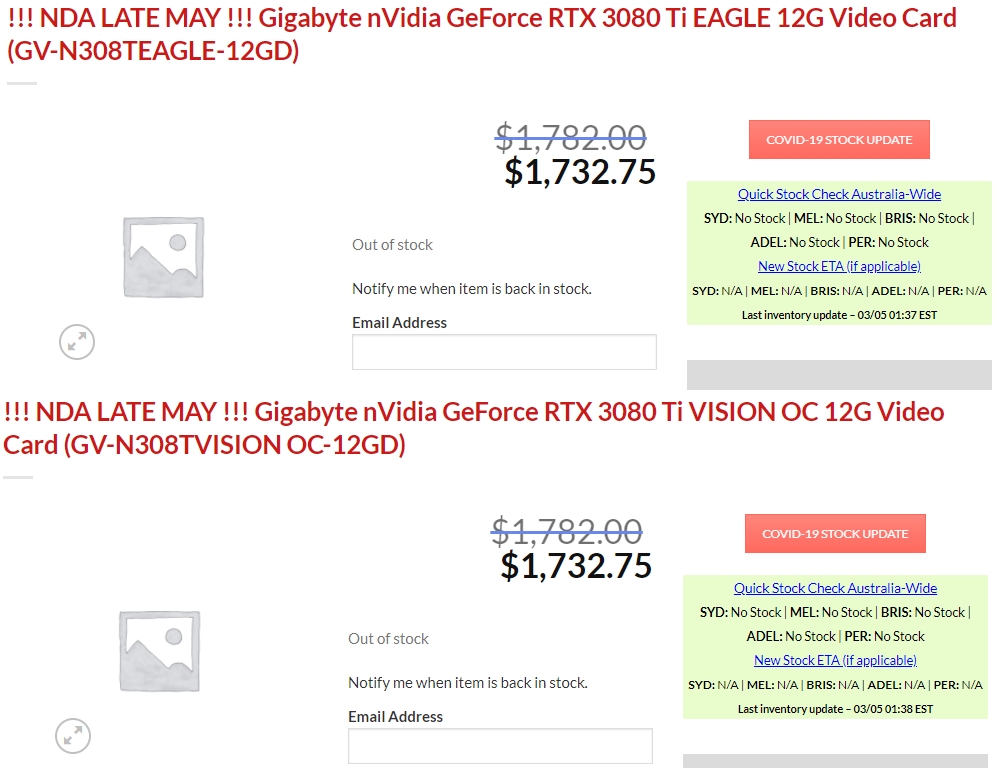 Interestingly, that last listing says the NDA will be lifted in late May, whilst the previous listing above suggests the first shipment of these graphics cards will begin on May 13th. However, these are likely dates provided before the recent change in announcement/launch dates.

Either way, it looks like Nvidia and retailers are gearing up for the release of these GPUs, and although Nvidia will reveal the official MSRP of these cards during the announcement, it’s unlikely we’ll actually see any launch for their original MSRP.

If these rumors are true, then it’s likely Nvidia has pushed back the announcement/launch dates in order to have better stock at launch, for which the Green Team themselves expect won’t get better until the end of the year.

What do you think? Are you excited for the RTX 3080 Ti or RTX 3070 Ti? Which one are you most interested in? And do you think Nvidia will have more stock available at launch for these GPUs? Or will it be the same scenario as all previous launches? Let us know!

Do you think Nvidia will have better launch stock than last time?

And another scalper is born...

In other news... pitchforks and touches are up is sales.

Absolute farce. So we are now at the stage developers cannot improve their end product since no-one can realistically improve on anything they already own. A select elite will get one and wave their internet d i c k around for a bit then flip on ebay for a few extra quid. Ho hum.

For a second I thought it was listed for $225 and I couldn't believe what I was reading. And its a good thing I didn't believe it as that price for an electronic toy is a fcking joke!

It doesn't go without saying that the price is too High,
it has to lower quite a bit.

And this my friends is why I say that Nvidia is scalping itself...you won't get these cards even for this absurd price....they'll buy these cards themselves and sell it elsewhere for four times the price because people will buy them as such

Holy crap, this card alone is more than twice as expensive than my whole system.

wtf is that price