Owlcat games are moving their next Pathfinder title, Wrath of the Righteous into a phase 2 beta. This is available for backers from their Kickstarter/ Slacker Backer early adopter investment tiers. Basically if you had access to the original playable Beta you will be able to update your files from today and slip into a beta that lets the player run through the first 4 chapters of the popular Pathfinder adventure path by Paizo publishing.

Wrath of the Righteous is the second release by Owlcat that faithfully converts a popular adventure path from the table top roleplaying game. The first game was Kingmaker and was very well received by fans of the roleplaying game.

Pathfinder Wrath of the Righteous release date will be on 2nd September 2021. And this final retail version will be available on Steam and GOG and you can already add it to your wishlists if you desire.

This time around you find yourself in a city under siege by the forces of hell. Demonic creatures and cultists are destroying everything and as you put together your party and gather together the last defenders of good you step deeper into the inferno to put a stop to the slaughter.

Inspired by the classic D&D PC games like Baldurs Gate and Heroes of Might and Magic III; Pathfinder: Wrath of the Righteous will offer up 60 hours of gameplay, 25 character classes, 12 races, and include the Mythic paths that are specific to this particular Adventure Path. The Mythic Paths will launch your character to new levels of awesomeness as you unlock them at later points in the game.

You can run the game with turn based combat or with Real-Time Pause, where you can pause as often as you like during an encounter, but otherwise your characters will just go at it live, until you redirect them.

A few other cool things of note with Wrath is that you will get rideable animal companions and some of the mounts that you can eventually find yourself riding can be pretty interesting. They have also added some juicy dismemberment into the animation, that can happen to monsters and characters alike, so be ready for some blood soaked screens. Another addition is some comprehensive weather systems, from light to heavy rain and even snow storms, all of which can influence the environment and battles in some way.

Something the devs really wanted to highlight was that the in game tutorial and hints are much more integrated throughout, and while some of these hover overs are still a little janky in where they appear, on the whole the game delivers a huge amount of feedback that can be turned off if you are already familiar with that bit of insight. Hopefully this will leave less guessing in what is a pretty deep game already.

We have had some hands on time with the latest Wrath of the Righteous beta build and put a bunch of questions together that the developers kindly fielded during a recent press event.

Below there may be some small **spoilers**, depending on how sensitive you are to what you wish to know before playing a new game. 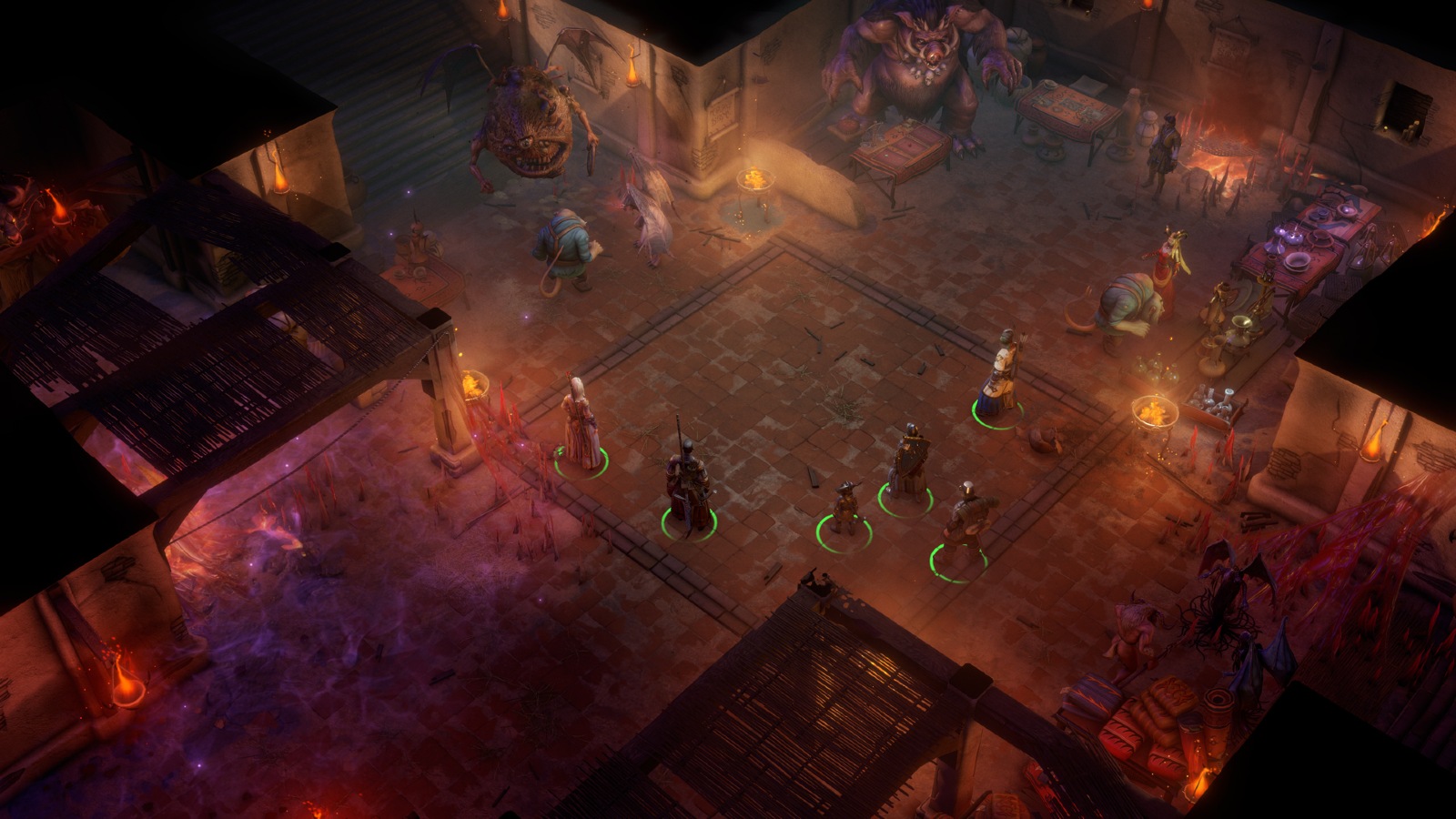 Q1: Based off of experiences and feedback from the release of Kingmaker, what was the team's priority in improvement and features as it approached Wrath of the Righteous?

ANSWER: Better at launch of KM was a little rough. This time around we polished it more. New systems to help prevent game breaks. Systems to see all decisions in game can be concluded within the game by the character. Bug reporting. More companion engagements.

Q2. What are the most prolific innovations that Wrath of the Righteous does to separate itself from other games in the genre, including the previous title, Kingmaker?

ANSWER: Mythic paths that allow the characters to become VERY powerful, Angels, Dragons, Liches. Making you feel like you are commanding the armies and leading against the demons.

Can move the camera around 360. Which is very helpful as there is a point when you are besieging a city with very tall towers etc.

Q3. How closely does the story follow the original Paizo adventure path?

ANSWER: Owlcat consider themselves the DM for this adventure. They are taking the story and retelling it for their computer game audience. Some encounters are very similar in structure and layout. And yet some could be significantly different from the original material. It is all done with the idea of delivering a great fun Adventure Path. 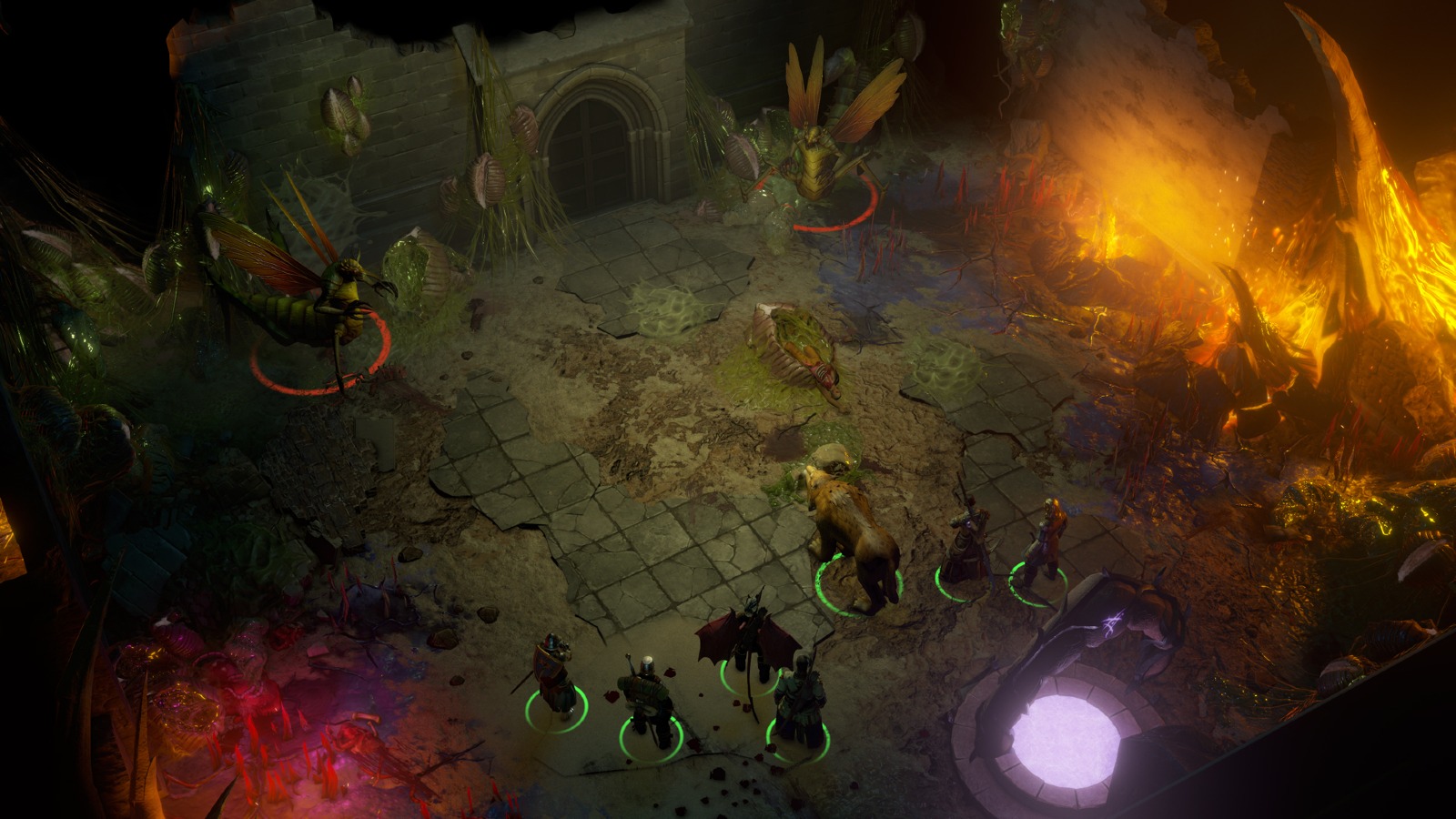 Q4. Will it be possible to miss finding all the available companions as you progress through the campaign, like Jubilost in Kingmaker? Or will recruitment of companions be more streamlined?

Q5. Have you interacted with Paizo or the authors of the adventure path? For example, did Paizo follow the development or give directions so that the vision of the game corresponds to their vision of the tabletop experience? Can you take enough freedom with the story? How do the two compare?

ANSWER: In terms of freedom, Paizo are very easy to work with and help support our ideas. We have all played the adventure path here at Owlcat and Paizo are always there to help us come up with seamless ideas when things don't quite fit. We have never worked with another company that is so good at supporting us.

Q6. How customizable is the army you command? Are you able to equip each soldier individually? Will the soldiers be a part of the role-playing experience in the game? 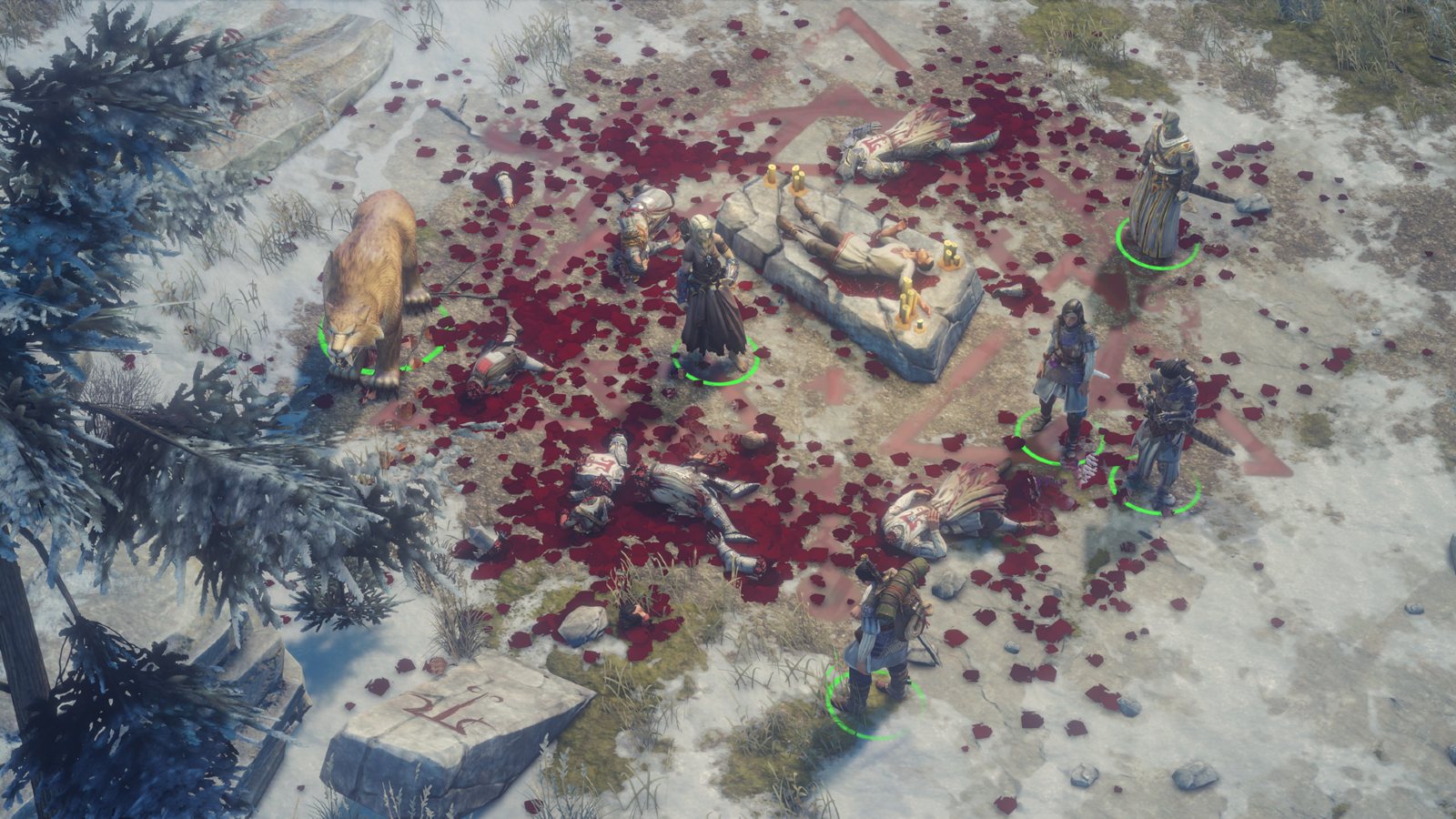 Q7. Will the ability to dismiss/dispel other spells be implemented?

ANSWER: Not yet but hopefully it will be added in for the final release.

Q8. Will casters (divine and arcane) get more variety in their O-level spells? Kingmaker's feel limiting, especially when you contrast them with 5E D&D.

Q9. What bonuses do Cavaliers get with their weapons while unmounted, if any? 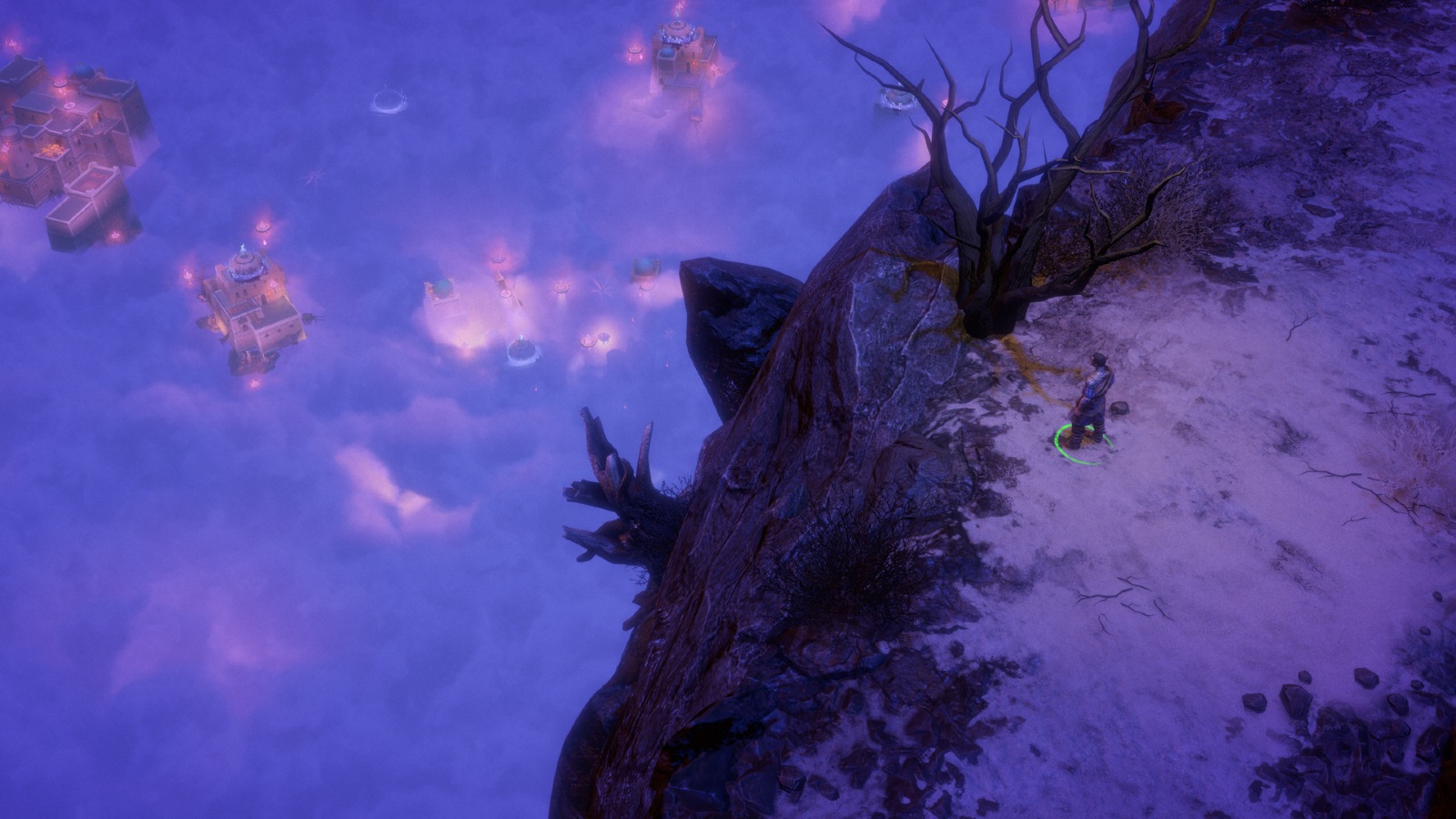 Q10. Will there be new weapon types added that were absent in Kingmaker, like lances for the Cavalier?

Q11. does the sentient weapon companion have a romance option?

Q12. Is it planned to adapt the encounters depending on the RTwP / TB combat modes? A run through the game in turn-based mode takes significantly longer.

ANSWER: No changes to encounters based on battle mode type. 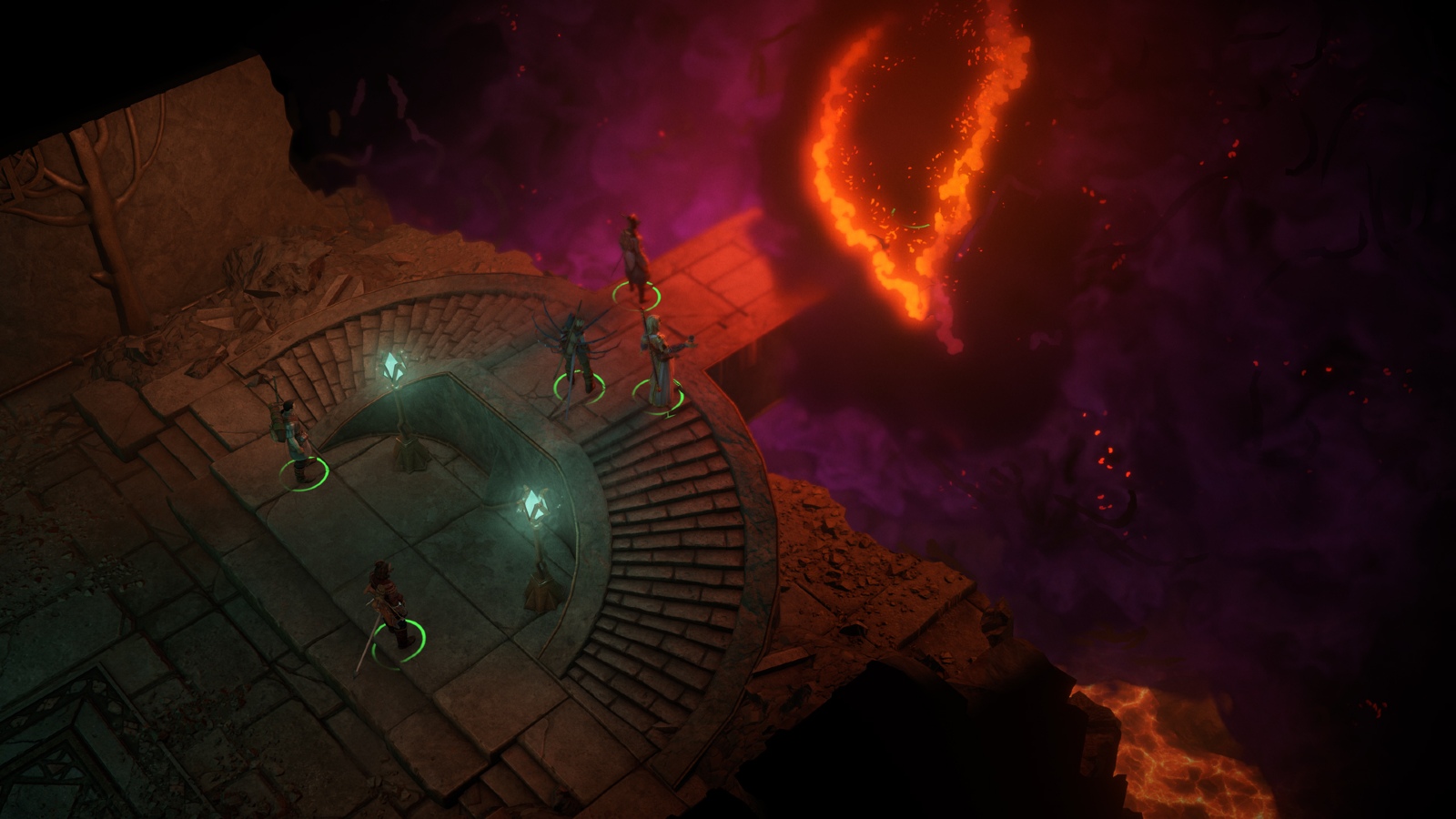 Q13. Will Cavaliers of smaller species be able to ride animals such as pigs? Badgers?

ANSWER: Can ride Medium sized animals that are within the game. There are some boars in game but not pigs or badgers.

Q14. Pathfinder's story missions could be confusing, especially when you dealt with the Bloom. Will Wrath be a bit more clear, or have more tools to help with being clearer?

ANSWER: Kingmaker was more tied to time. Time is not as important. Some events will be tied to time but will not be too punishing if not addressed. So some of the quests are deliberately mysterious, where you have to find things in the world. But these will most likely be side quests and not vital to the forward movement of the story arc.

Q15. Will there be greater animal companion customization options, like names, aesthetics, and/or armor?

ANSWER: None for names. You will see equipment on animals but less variety than items on party. 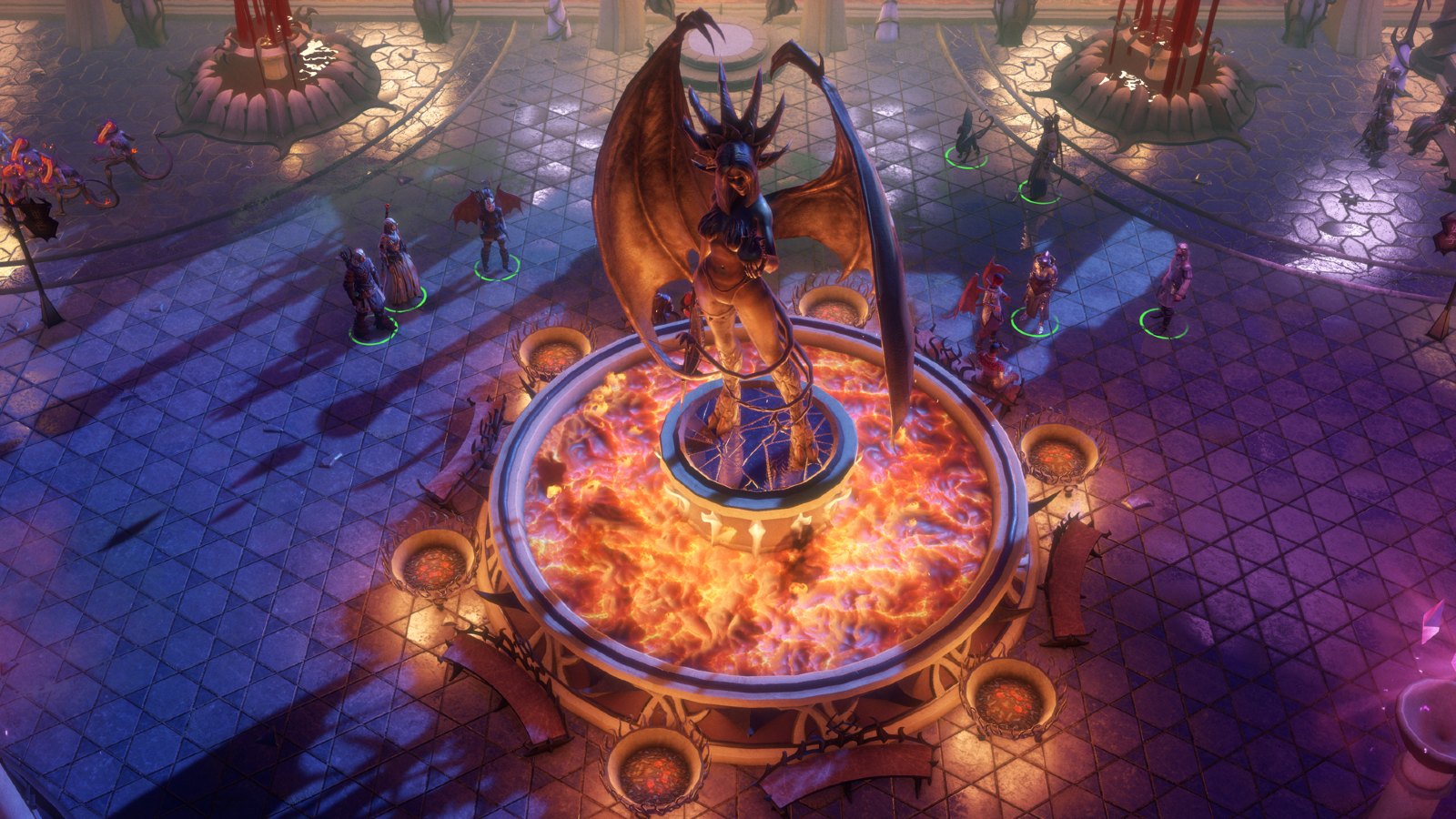 Q16. Kingmaker offered Linux support with Mac and Windows. Will Wrath of the Righteous be available on Mac and Linux and the same platforms and if so when?

ANSWER: PC windows only at the moment. Working on Mac as well. Linux is not being worked on at the moment and may not got a version, but it is unclear at this time.

Q17. How did you choose the adventure paths, Kingmaker and Wrath of the Righteous? Are there other ones that are tempting you? And if so, as DLC or as a new game? There is a very good base now.

ANSWER: Some are easier to convert but there are a lot of choices to consider. Kingmaker had a great sandbox open experience so it was a good one to start with. Wrath lets the player become the general of armies against demons ….who knows what guides the next choice at this point.

Q18. Are there any plans for multiplayer options for the game like those offered in the Divinity series?

ANSWER: It takes a lot to create great coop and multiplayer. So at this point there is not any included. 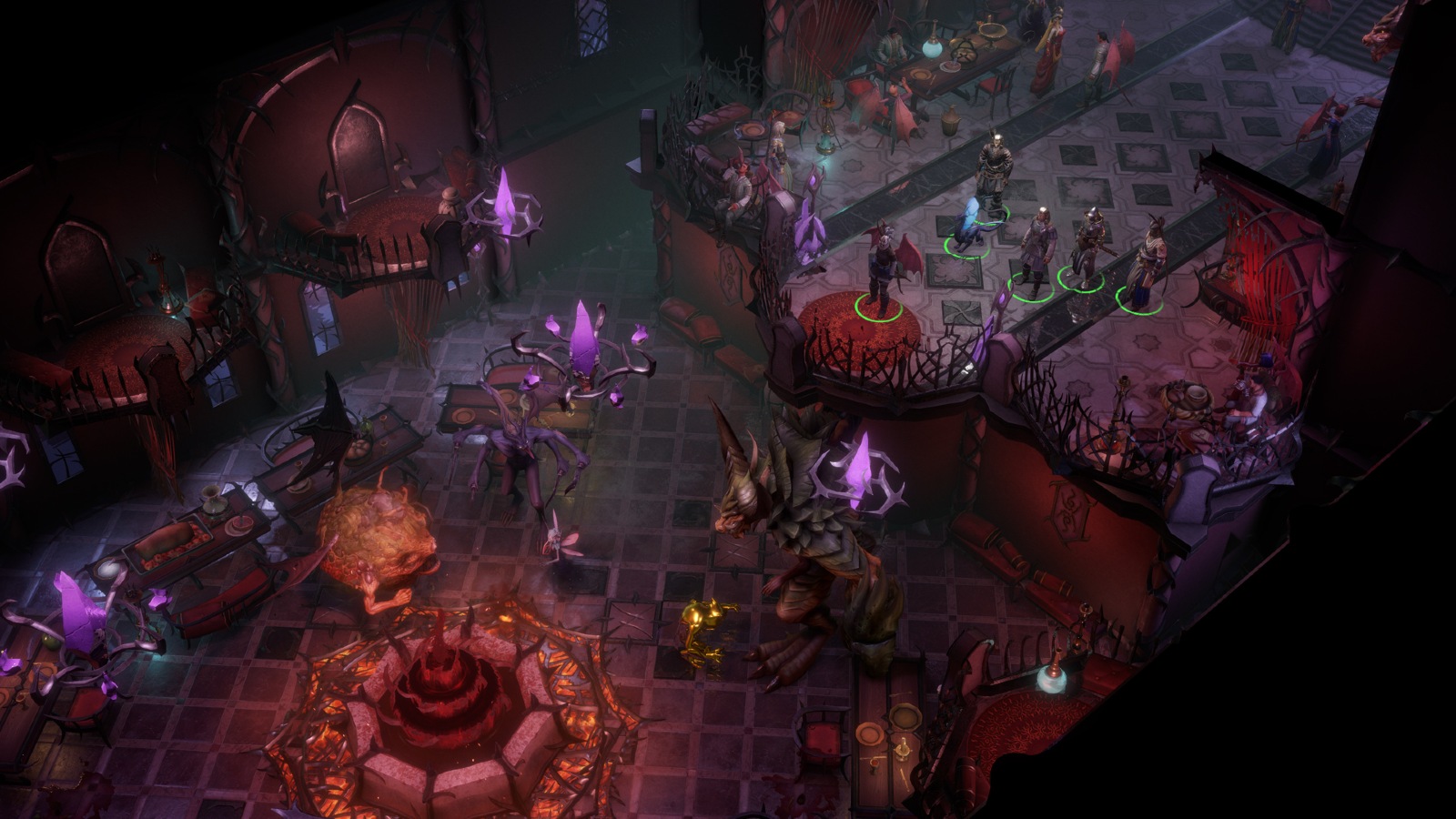 Q19. It may be too early to tell, but do you have any plans of incorporating standalone campaigns, like Varnhold's Lot, that have an impact on the main story?

ANSWER: Focusing on the primary game release and not working on any DLCs. But we know that DLC was greatly enjoyed with Kingmaker, so when the time comes we will have that discussion and likely look on it favorably.

Q20. Who can access the beta and how long will it run

ANSWER: All backers will join the beta. It is still possible to jump in to back. Beta will be available for several months up to the official launch of the full game in September 2021.

Q21. Is Wrath of the Righteous coming to consoles eventually?

ANSWER: Definitely really interested in bringing to consoles. But no further info at this time. 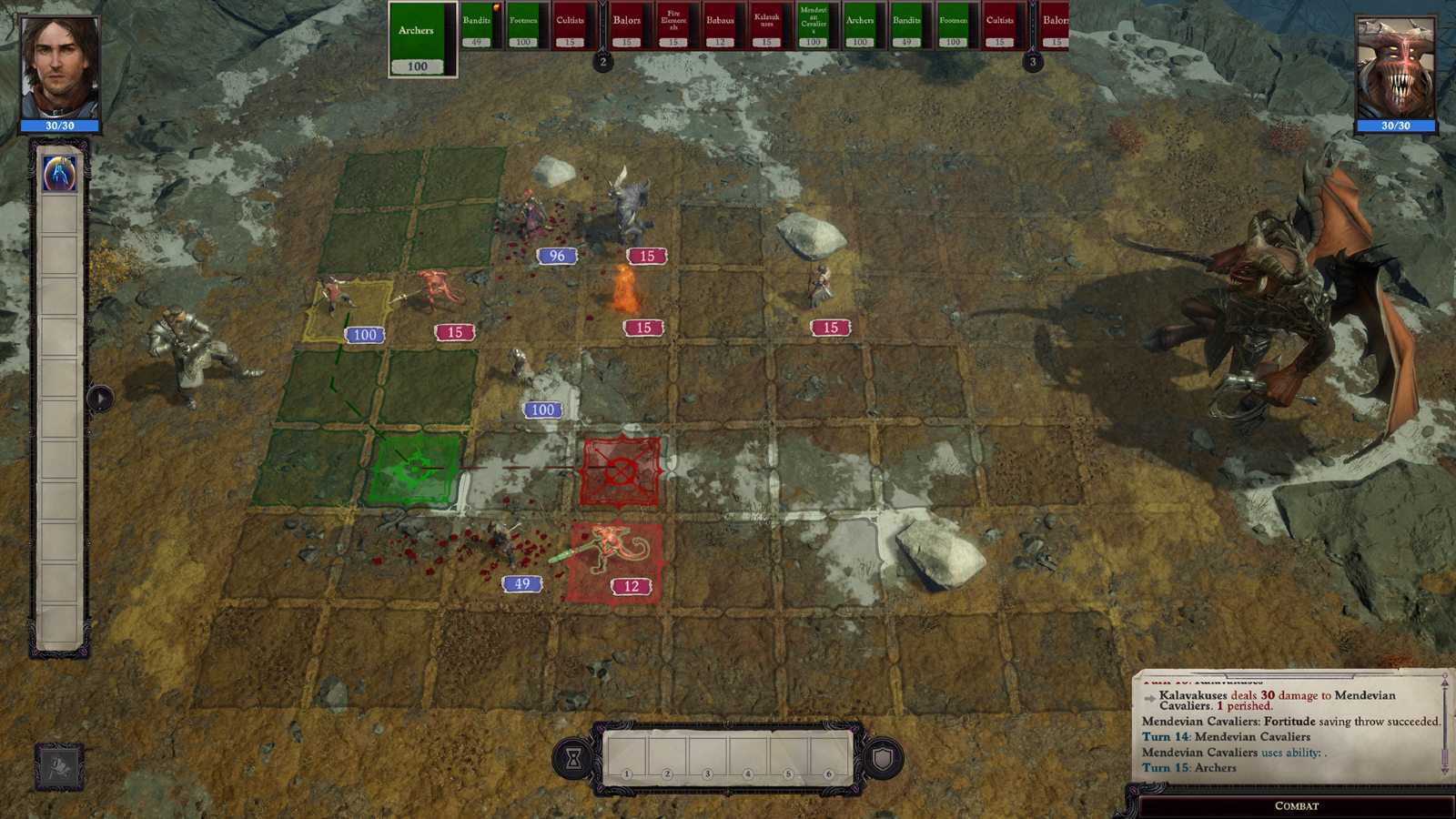 Q22. What proportion/percentage of the game is focused on the new army management and battles versus regular player character RPG?

ANSWER: 10-15% of time in certain chapters. You become leader over time. You don't start game like this. Gradually unlocking entire features. It is a sandbox so you can finish it pretty swiftly if not enjoying.

Q23. Will there be a character respec option, like in Kingmaker to allow the player to change their characters stats to better suit their play style later in the game?

ANSWER: Yes, you can respec the character like in Kingmaker.

Q24. Some extra info about the in game mounts?

ANSWER: Enemy strike the mount first, so go in on a mount if you are a spellcaster to help add buffer hitpoints. You will be able to equip the mounts with barding armor, which will be visible on the mount. There are several types of mount armor. 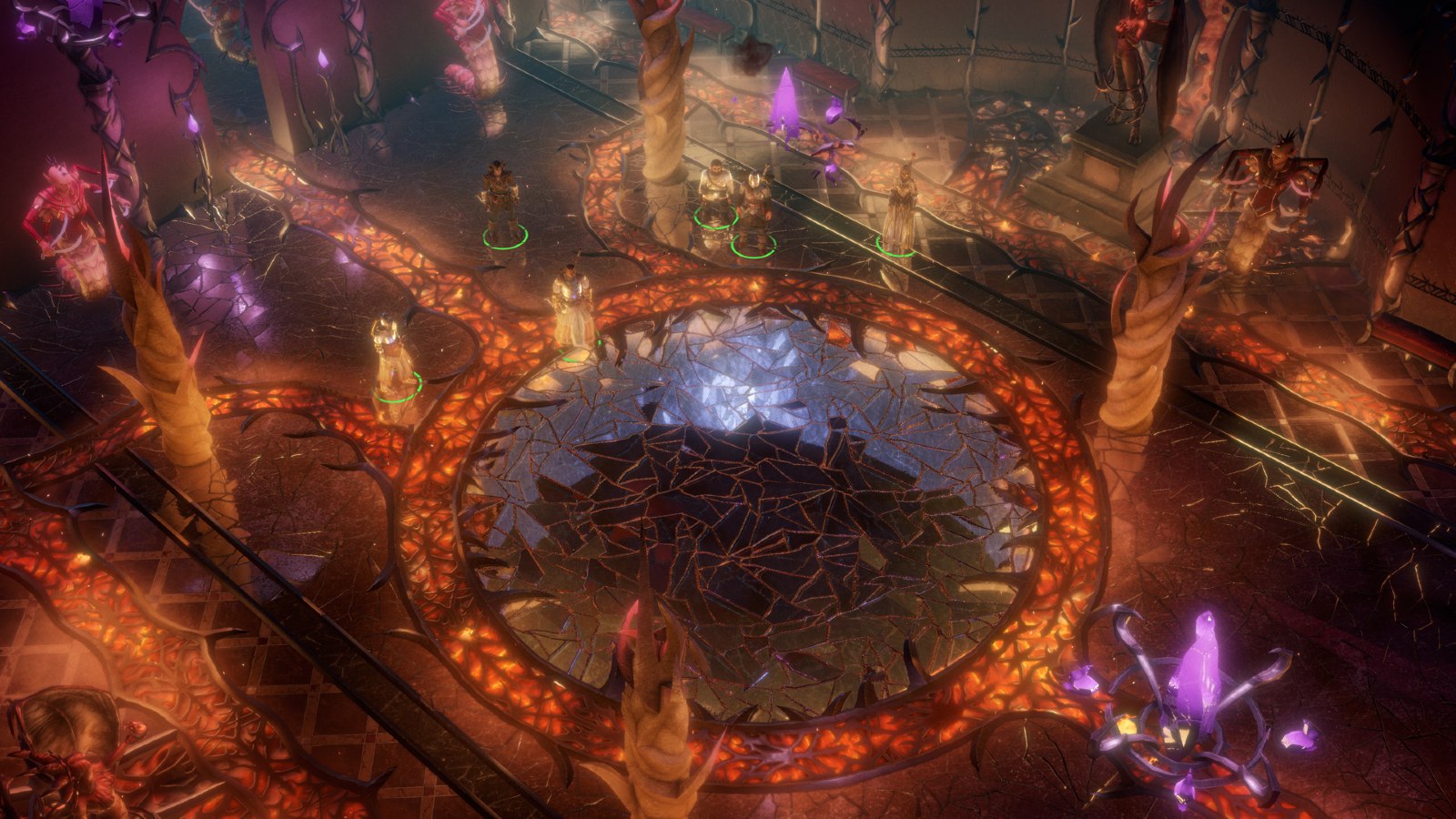 Q25. Is it complete and just polishing or still building?

ANSWER: Still working on some aspects but 95% complete.

Q26. Have you considered trying your hand at Starfinder next? Or do you prefer Pathfinder?

ANSWER: We have played it a little bit, and while we like it we are all more interested in Pathfinder at this point. We know it far better.

Q27. Are any romances locked behind mythic path?

ANSWER: Cant answer as it would be a spoiler.

So there we go, a lot of info and screenshots to sink your teeth into about the upcoming Pathfinder Wrath of the Righteous, which goes to full release in September.

“Still have this site in my bookmarks bar, out of habit I still click it once a week, too bad :(” - Virate

“I'm impressed, I must say. Very rarely do I come across a blog thats both informative and entertaini...” - mairamk033

“ I really appreciate this wonderful post that you have provided for us. I assure this would be benef...” - leena1