As the anticipation builds up for what AMD has next in store for the RX 6000 series graphics card lineup, rumors of an RX 6600 XT and RX 6600 non-XT have been cropping up recently. Now some alleged benchmarks have been apparently leaked, giving some kind of indication as to how both GPUs will perform.

First of all, the leak has apparently revealed the specs of both cards. As stated before, both will be based on the Navi 23 GPU die, with the RX 6600 XT featuring the full Navi 23 XT GPU, and a cut-down Navi 23 XL version for the RX 6600.

In terms of what that means for the specs, it was previously stated the RX 6600 XT would feature 32 Compute Units (2048 stream processors) and 32 Ray Accelerator cores. This leak reaffirms the same specs, with 64MB of Infinity Cache, and 8GB of GDDR6 memory across a 128-bit bus width.

As for the RX 6600, apparently this card will include 28 Compute Units (1792 stream processors) and 28 Ray Accelerator cores. Also with 64MB of Infinity Cache and 8GB of GDDR6 memory across a 128-bit bus width.

For the performance, here’s the leaked 3DMark Time Spy graphics cores for both cards compared against some other relevant GPUs: 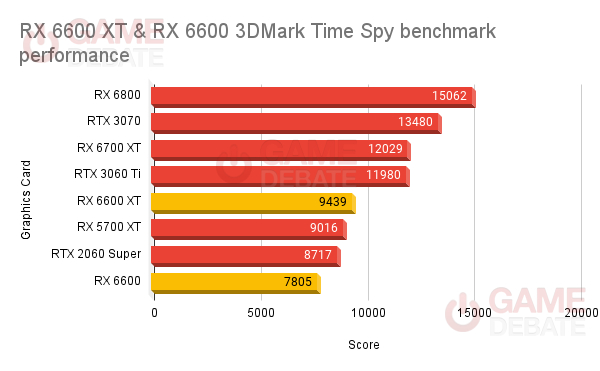 If we were talking about MSRP here, then that means with an RX 6600 XT you’ll be getting faster performance and better efficiency than an RX 5700 XT. The RX 6600 will be exactly the same but with an RX 5700 instead.

Both cards will be aimed at 1080p gaming, and the rumored price point for the RX 6600 XT is $299 MSRP. Unfortunately you’ll probably be hard pressed to find one of them at MSRP if you don’t manage to bag yourself one from AMD themselves.

What do you think? Are you interested in an RX 6600 XT or RX 6600? How do you feel about the performance results above? Are they good? Or worse than you were expecting? And how much do you think either card will cost? Let us know!

How do you feel about the RX 6600 XT performance above?

How do you feel about the RX 6600 non-XT performance above?

Can't really say if it will be great or not, because it will highly depend on price. If cards will be cheaper than RX5700XT, then it will be great. If 6600XT will be around that price, then basically nothing really changed, just refresh of MSRP, but no generational gain over last generation price point. I ignore naming, because price points matter far more in this, names are just marketing thing.

But otherwise 5700XT performance level isn't bad, though we have to see how it slots in, or whether we will see generation price to performance increase or not. But if 6600XT is above 400USD card, then it is just refresh of 5700XT, disappointing, and nothing was really gained.

it better be priced below the 5700 XT MSRP, I mean it's almost 2 years newer. Sure it has more features like RT, DX12 Ultimate, VRS (at least it should have these) but I don't think those features could justify minor performance improvement for the same price (although MSRP is a joke nowadays).

Gen-to-gen performance should be better (not that "minor") than the RTX 3060 at least. The 30- MH/s should be a good sign for the stocks.