Games Workshop and it’s various Warhammer IPs are carving their way through the video game landscape with Astartes-like precision. While the Warhammer fantasy focused juggernaut, Total War: Warhammer 3, is gaining momentum (they did their Survival battle gameplay reveal very recently, and is due out later this year) we turn our attention to the even more popular IP end of the Warhammer spectrum: the sci-fi defining Warhammer 40K.

Games Workshop and Warhammer 40K make their shop money from their tabletop miniatures game and rule set. You would have likely seen the hobby shops on your high street selling minis and scenery and paints. This stuff ain't cheap and this is the reason I bring this up. Because for years now the company has allowed their Warhammer 40K IP to be licensed and turn up in games, but never have they let the game developers recreate anything that replicates the tabletop version and rules.

Probably for a few reasons. Firstly they wouldn’t want to risk losing money and business because an inferior digital product lowered the value of the Warhammer name. And on the flip side, they wouldn’t want to lose custom because there was a digital product that recreated the experience and was good enough to replace the need to buy into the Warhammer hobby experience. Which can be a very costly hobby.

But as the years go by and the cash continues to come in, Games Workshop have rightly become more confident. Games like Total War Warhammer produce incredible and faithful experiences, helping to draw more people to the tabletop IP.

And so onto the jewel in their crown, Warhammer 40K.

Let me introduce this tactical turn based title by saying - The upcoming Warhammer 40,000: Battlesector is the closest we have ever come to seeing a tabletop version of 40K brought to our PCs. 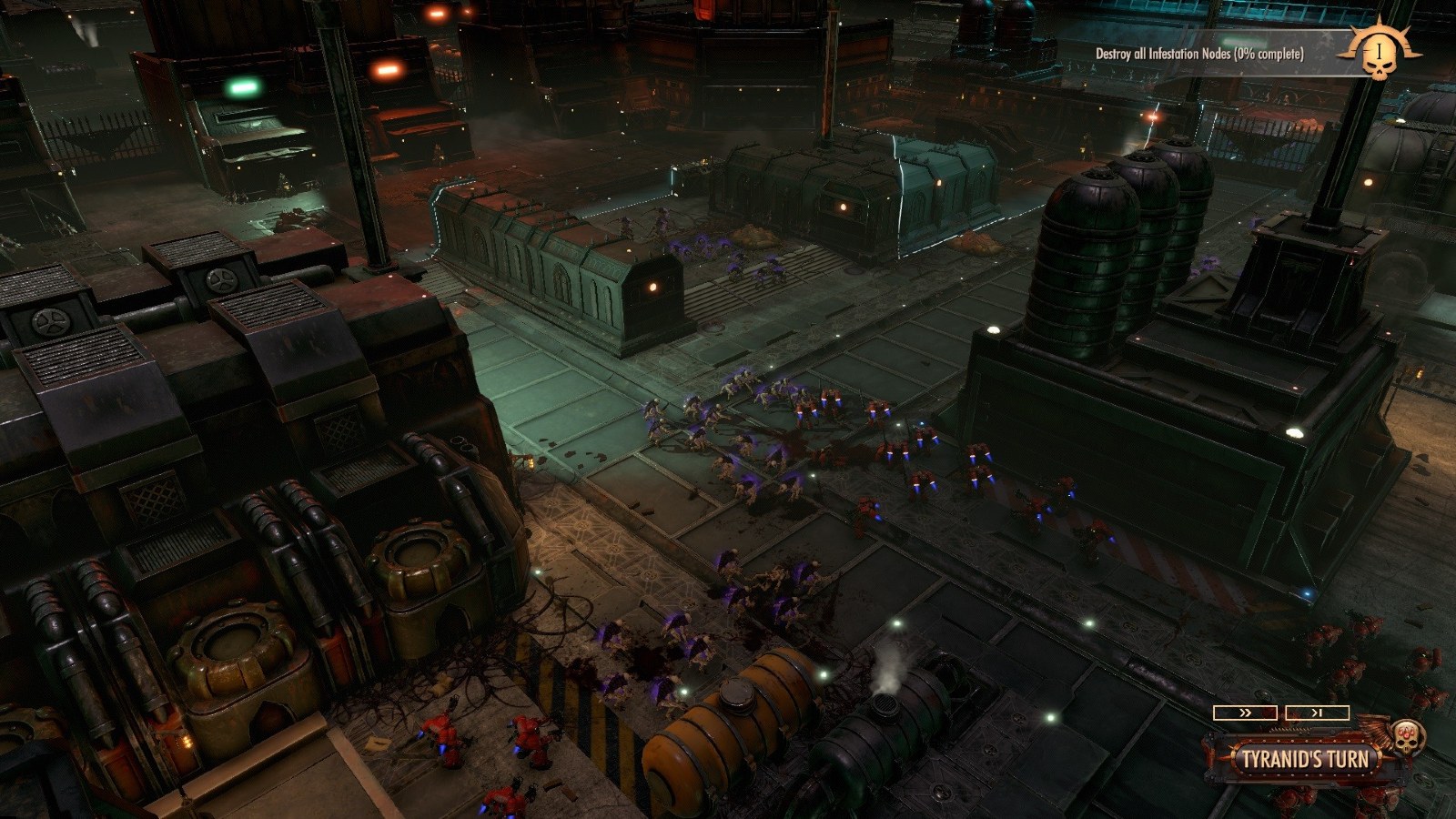 The publishers behind Battlesector, Slitherine, have other Warhammer products under their frag belt, including the wonderful Warhammer 40,000: Gladius - Relics of War. And while that is a mouthful of a name, the game is basically Civilization meets Warhammer 40K, with all the boring politics and trade removed and more Necrons, Space Orks, and bolter battles put back in its place. A thoroughly enjoyable title that is still supported and getting fun community mods added.

With the Warhammer pedigree established, Battlesector is being developed by Black Lab Games, who previously and faithfully worked on another popular IP with Battlestar Galactica Deadlock, a 3D tactical spaceship wargame.

Unlike all other 40K video games before it, Battlesector puts the player in charge of individual units that, when you zoom in, look and feel like the tabletop space marines themselves. 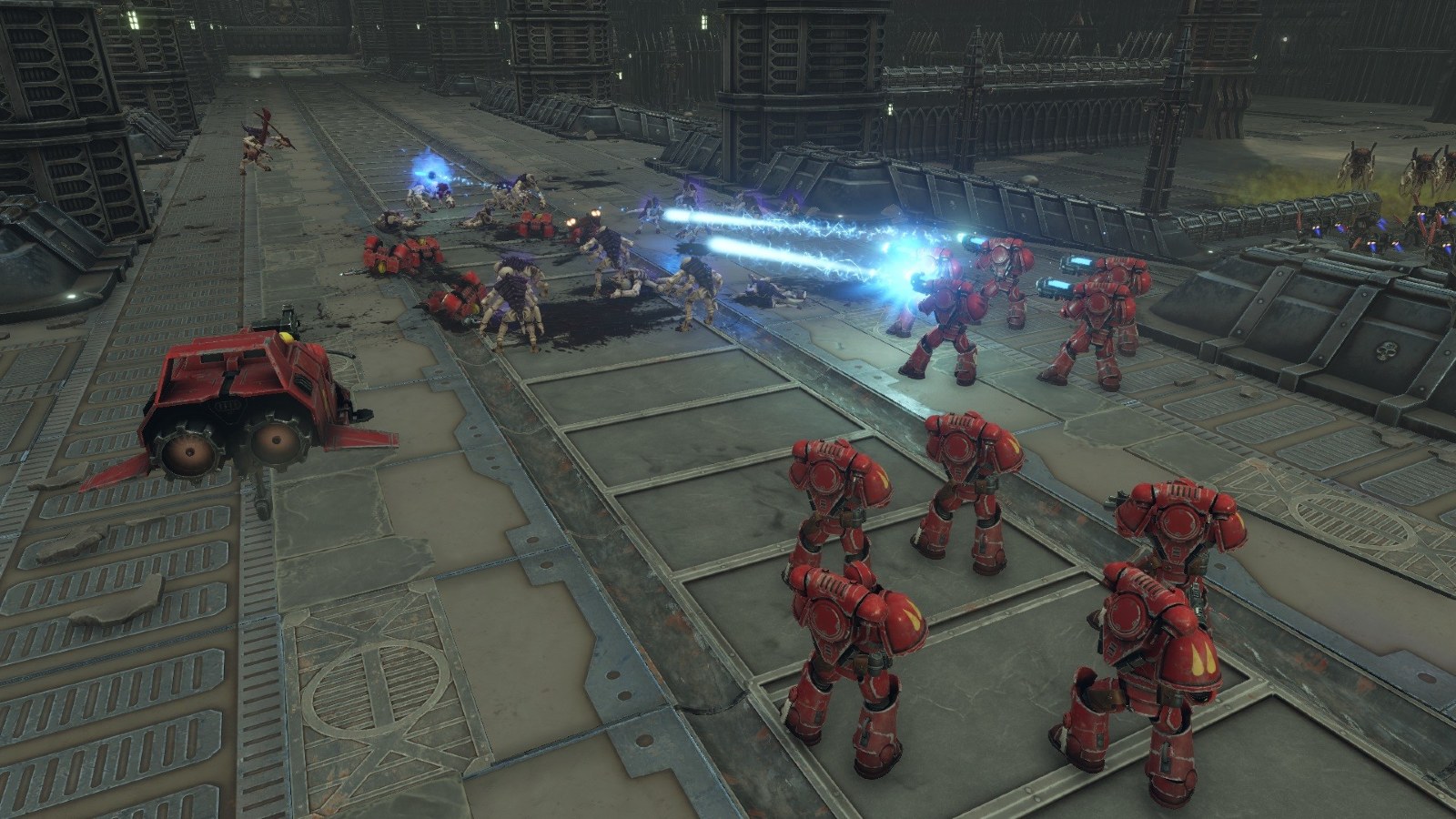 We had the chance to play through a beta build that let us experience how the combat and gameplay works and its safe to say that having played the tabletop game with my young son, plays very similarly to it.

Battlesector looks and sounds great, giving the player a real sense of the power of the Space Marines as they push forward, encouraged to do so by the building of a stat called momentum that when it gets to 100 grants the unit a bonus on their next round. Their supporting Space Marine Sergeant and Sanguinary Priest units each have their place on the field as well. While the different Space Marine units are in squads of 3 to 5 figures, the Sergeant and Priest are more powerful solo units. 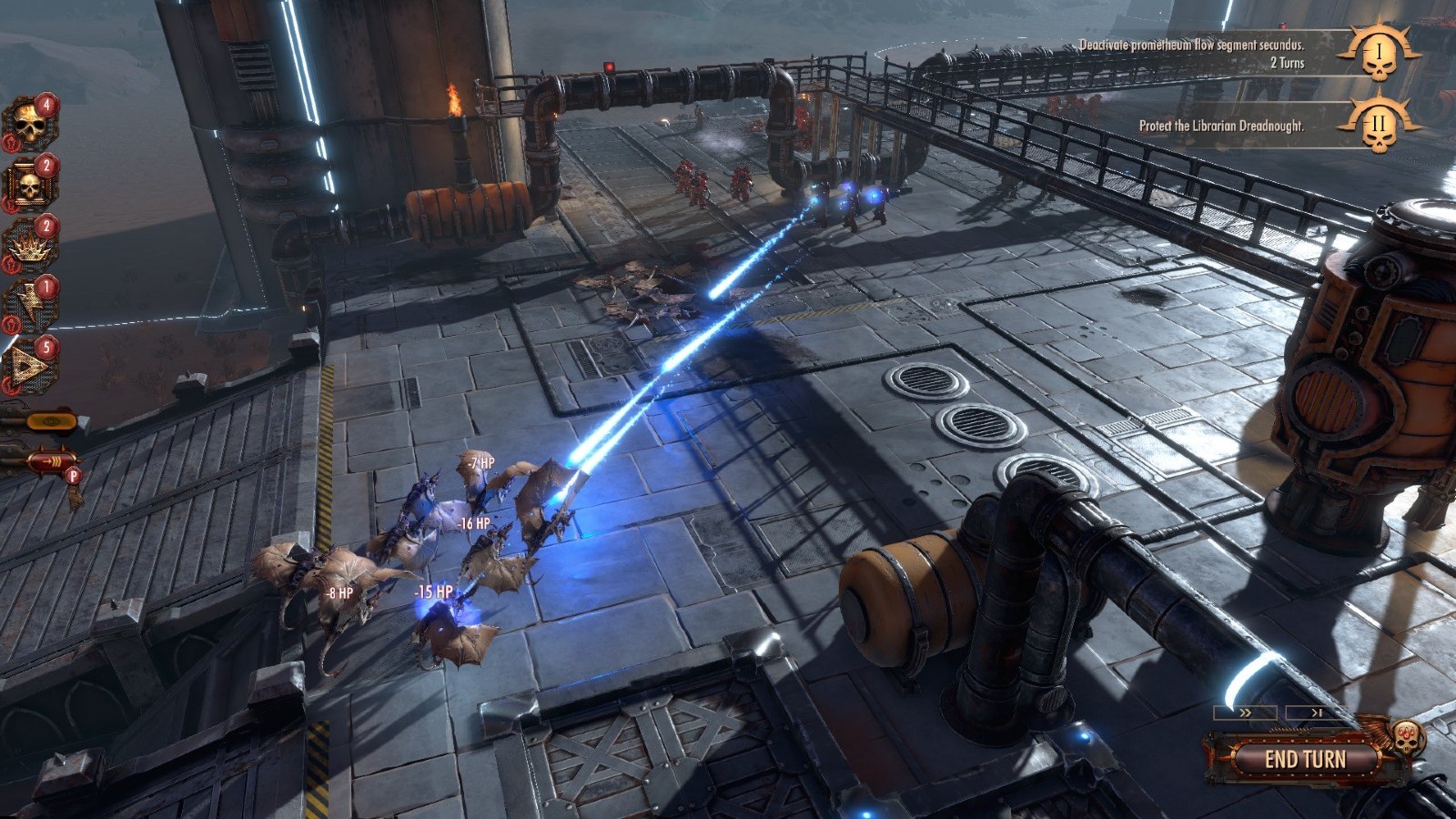 And so when the squad fires their numerous weapons they can hit lots of figures in enemy units at the same time, helping to thin the ranks of the numerous Tyranid squads. The Sergeant’s powerful melee attacks on the other hand make him great for getting into the fray to do a tonne of damage in each of his two strikes. So if he were to attack a mob of Tyranids then he would like kill only 2 of the 10 creatures. But if you were to move him up against an enemy that also only had 1 or 2 powerful figures in it then he would likely do far more damage per unit than the Space Marine squad.

This, along with the atmospherically stylized tiled terrain maps, is where the tabletop tactics begin to come to life. Each unit has action points, armor value, hit points and various attacks and weapon loadouts that adjust their tactical purpose.

The Warhammer Battlesector user interface is slick enough, with a number of the familiar camera keys on offer as the devs work hard to try and keep the complex tactical mechanics at the players fingertips. For the most part this seems to work, but there are still those occasional, oh crap moments, where you accidentally clicked to move your guys and now the enemy get a free close quarters attack that kills your unit. 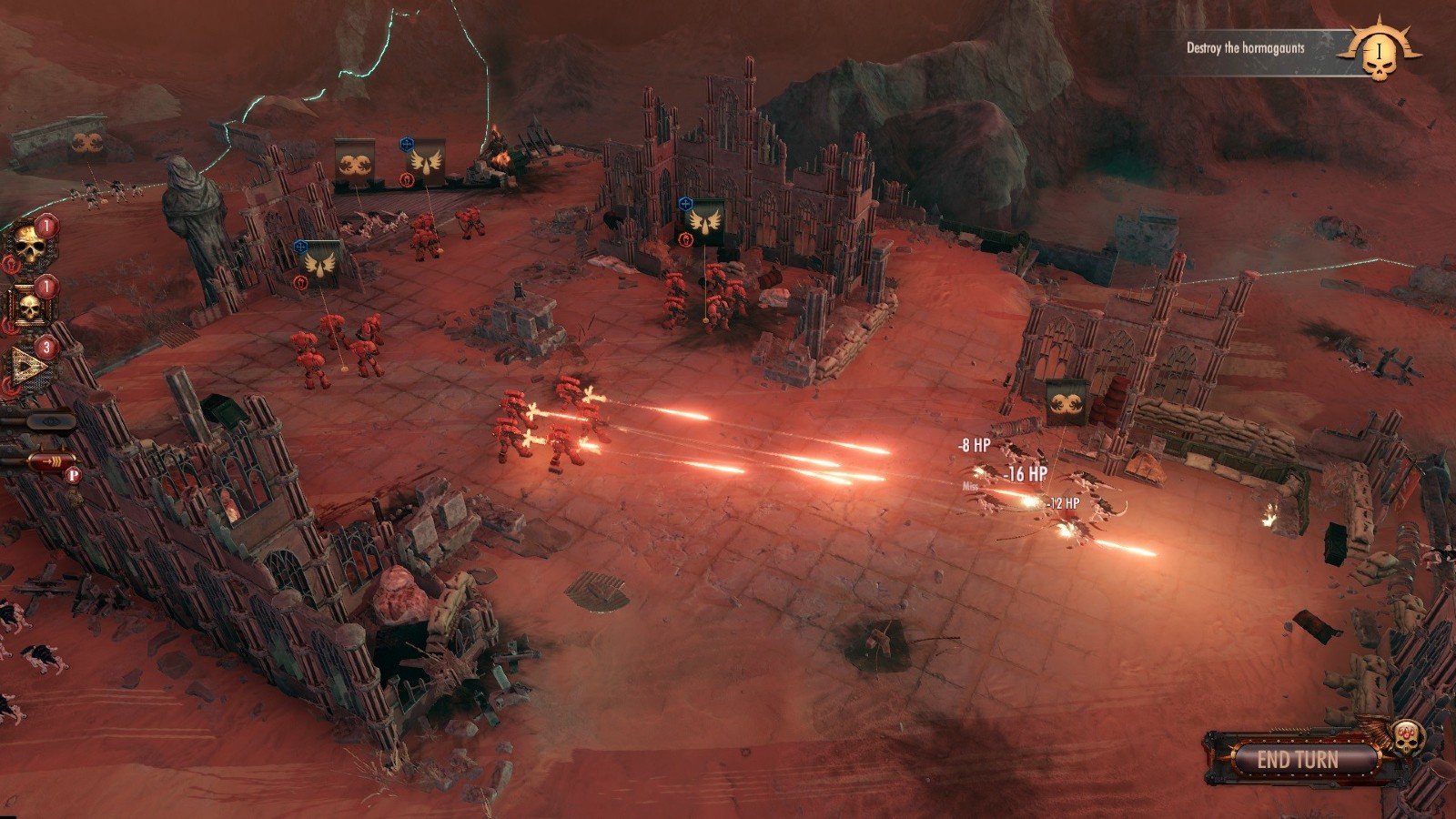 Also some of the enemy AI tactics seemed a little simple at times. Enemies would charge your army with very inferior numbers only to get cut to ribbons with bolters. Rather than moving in as one. But this could largely be the specific map and part of the campaign arc we looked at, before it ramps up its challenge.

The maps we saw seemed interesting enough and helped paint the story that was also pulled nicely together by some nice cut scenes, reasonable voice acting and heads of key characters popping up in the game UI to help pull you into this rich universe.

There is a lot more to talk about with Battlesector, like HQ Tokens you can spend and Army Management between scenarios, but we will save all that for when we get our hands on the full version of the Warhammer Battlesector game, which now releases on July 15th (they just pushed the game release back a month from June 15th).

But for now, Battlesector is looking very promising as a faithful table top 40K conversion and if its sales prove successful then I am already imagining numerous DLC and missions and factions being added in. Oh and yes there are Dreadnaughts in Battlesector already.