Uncharted 4 is the next PlayStation game coming to PC, according to Sony

As Sony begins to roll out their 1st party PlayStation games for PC, we’ve been very eager to hear what their plans are in terms of the next game getting a PC port, one of 16 unannounced games that Sony has apparently planned to bring to PC. Well, it seems that the next title has in fact been leaked, and it was by Sony themselves.

In a recent “Investor Relations” document from Sony, a slide that is labeled “more PC releases planned” includes the recent launch of Days Gone, which was released last week. However, underneath that is another title which has not been revealed by Sony to be coming to PC yet… and that is the titular Uncharted 4: A Thiefs End. 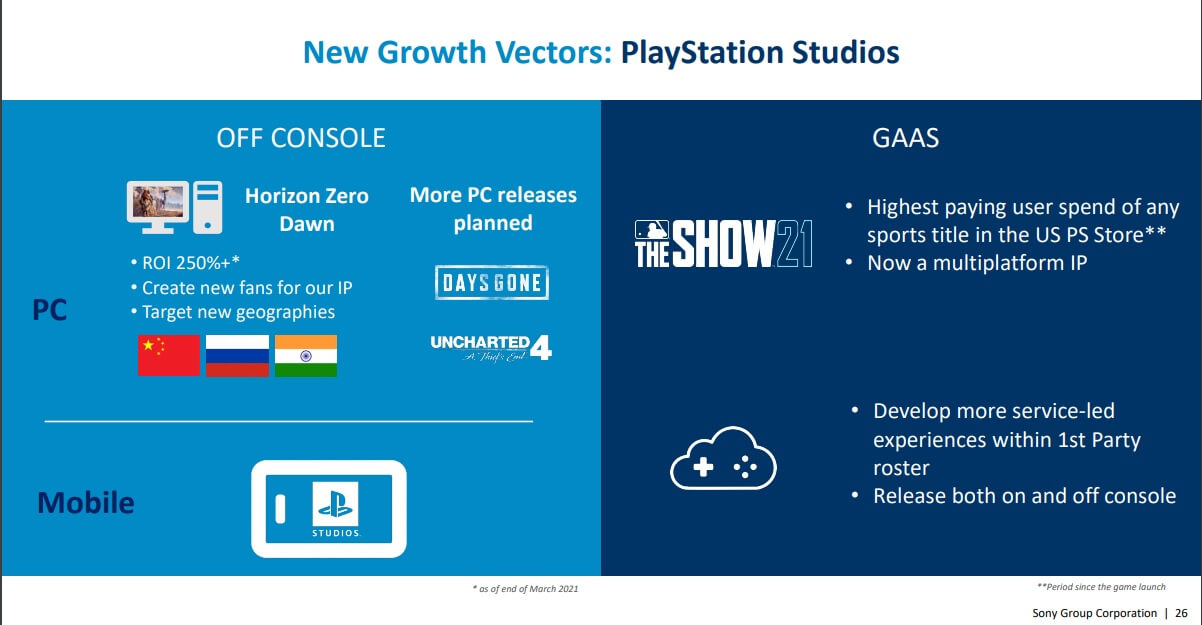 Considering Uncharted is one of their biggest IPs, it’s not all that surprising to see it get a PC release. However, what is interesting is that it’s simply just the fourth instalment and not an entire collection of all 4 games. I would hazard a guess that the collection would also come to PC, if not at the same time then a little later.

Considering it is labelled under “new growth vectors” as a way for them to “create new fans for our IP,” it’s a bit odd to not release the first 3 games as well in order to build that audience. Either way it seems like Uncharted is getting the PC treatment next, which means a higher likelihood of The Last Of Us coming to PC as well.

Sony is holding a State of Play livestream later today, and with how recent this report is we wouldn’t be surprised if the PC port announcement of Uncharted 4 will be revealed there. Hopefully we’ll also get the rest of the series as well but we’ll just have to wait and see.

What do you think? Are you excited for Uncharted 4 on PC? Do you want the whole collection as well? Do you think Sony will port over the original 3 games as well or will they just release U4 for now? Let us know!

Are you excited for Uncharted 4 on PC?

Will you want the original trilogy as well?

Releasing a story-driven game(s) such as Uncharted 4 before the previous games is not only pointless but cruel!

completlly agree, but then a lot of people skipp a lot of games from franchise and just play the latest one just bec it got popular

But I haven't played the prequels yet! Release them first!

I love all these console games coming to PC! Hope this paves the way for the next Horizon games to get ported eventually.

Forbidden West gameplay looked fantastic.
I think it may be using Ray Traced Global Illumination not sure though.

It's the only one I haven't played yet, if it is indeed coming to PC that's going to be a preorder for me. I own 2-3 and never played the first.

Why not bring the first 3 games first? or does the story not really matter that much??

Maybe for the dificulty to port those old PS3 exclusives, specially Uncharted 3, that was the ultimate good looking game of the PS3. For me the story of the other 3 is important but not entirely necessary to enjoy Uncharted 4.

They already ported the first 3 games to the PS4, though. Surely porting to PC wouldn't be that much harder?

hoped for the whole franchise to come in order like how halo did, this way i cant play it till older ones come

i am to dumb to use emu, tried to use Xenia to play rdr1 yet no matter what i tried i couldnt get rid of stutters

Try Xenia again. I think it got great updates the last 2 months.

Ps3 and Xenia are working perfectly fine even with ryzen 5 2600 and 1660 ti...
Xenia requires good gpu RPCS3 both...
Completed TLOU on RPCS and RDR 1 on Xenia

Not that I'm disappointed, but I wanted Ghost of Tsushima.

Great news but hope 1-3 come as well, yes there is Rpcs3 for those but that emulator doesn't run them that well and has many bugs

this article is wonderful

Wishful thinking but:
It might get released on September then get discounted close to the movie (Feb 2022?) release.

All i want are Killzone Shadow Fall and God of War.

God of War (or Dad of Boy, as it is now) is the one for me. 1-2 are nicely playable on a PS Vita or PC, Chains of Olympus and Ghost of Sparta I played through on original hardware (PSP) but runs on PPSSPP on PC, GOW3 (and GOW ascension) I'll need to wait for better support via RPCS3 and if GOW4 comes out on PC - that would be the GOW library complete and playable on PC :D

The right side of that slide is kinda disgusting... "GAAS" needs to buzz off...

It'll be nice to have Destruction AllStars or something like that close to release on PC (at least the game won't die at after launch).

But yea i dwon't like GAAS (Games as a service?) being the new normal.

It's all about that money. People spend tons to "collect" digital assets that are already in the game for some reason... It's all downhill from here, as it was with the mobile game market...

I dont like wehre gaming is going, switching to gaas and f2p cahsgrabbing multiplayer games that brings nothing new or exciting to the gaming community