Nvidia held a keynote yesterday at the Computex 2021 show, during which they finally officially revealed the upcoming Ti models for some of their most sought after RTX 30 series graphics cards. Thankfully, we also got some performance metrics to see how much better the Ti upgrades are.

Nvidia has announced and revealed the RTX 3080 Ti and RTX 3070 Ti GPUs, bringing an all new flagship gaming card to the lineup. Although the RTX 3090 will still remain as the fastest of the bunch, the new RTX 3080 Ti is here to give it a run for its money. But enough about that, let’s jump into the nitty gritty details and have a look at the new GPU specs compared to the rest of the RTX 30 series:

Of course, one of the most important aspects of a new GPU is the performance, and seeing how well it performs compared to the previous-gen graphics cards as well as the current-gen lineup and check if it's really worth the price and upgrade.

The new RTX 3080 Ti comes in at roughly 2x faster than the previous-previous-gen GTX 1080 Ti, as well as 1.5x faster than the previous-gen RTX 2080 Ti when running at 4K resolution. The new card excels at gaming, ray-traced workloads, rendering, and GPU-accelerated applications compared to the previous generation. For rasterized and ray-traced games you can expect 1.5x better performance, and for rendering applications like Blender or V-Ray, performance is up to 2x faster. 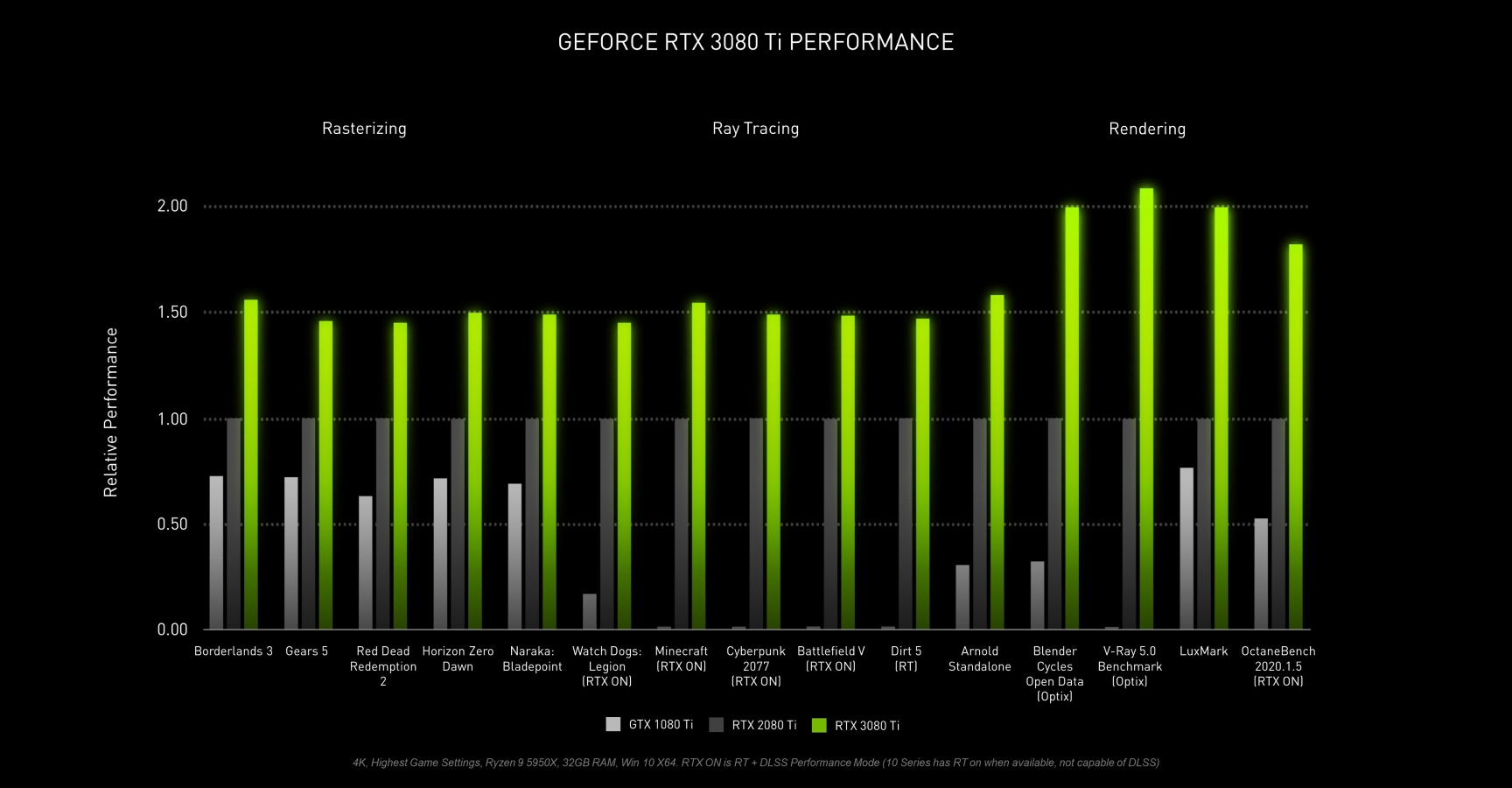 The RTX 3080 Ti will be available to purchase for $1199 on June 3rd 2021, an increase of $500 over the RTX 3080 whilst offering 18% more cores as well as 20% more video memory. It is also a $200 increase over the previous-gen RTX 2080 Ti, which is surprising considering Nvidia’s recent approach to launching next-gen cards at the same price as previous-gen GPUs. 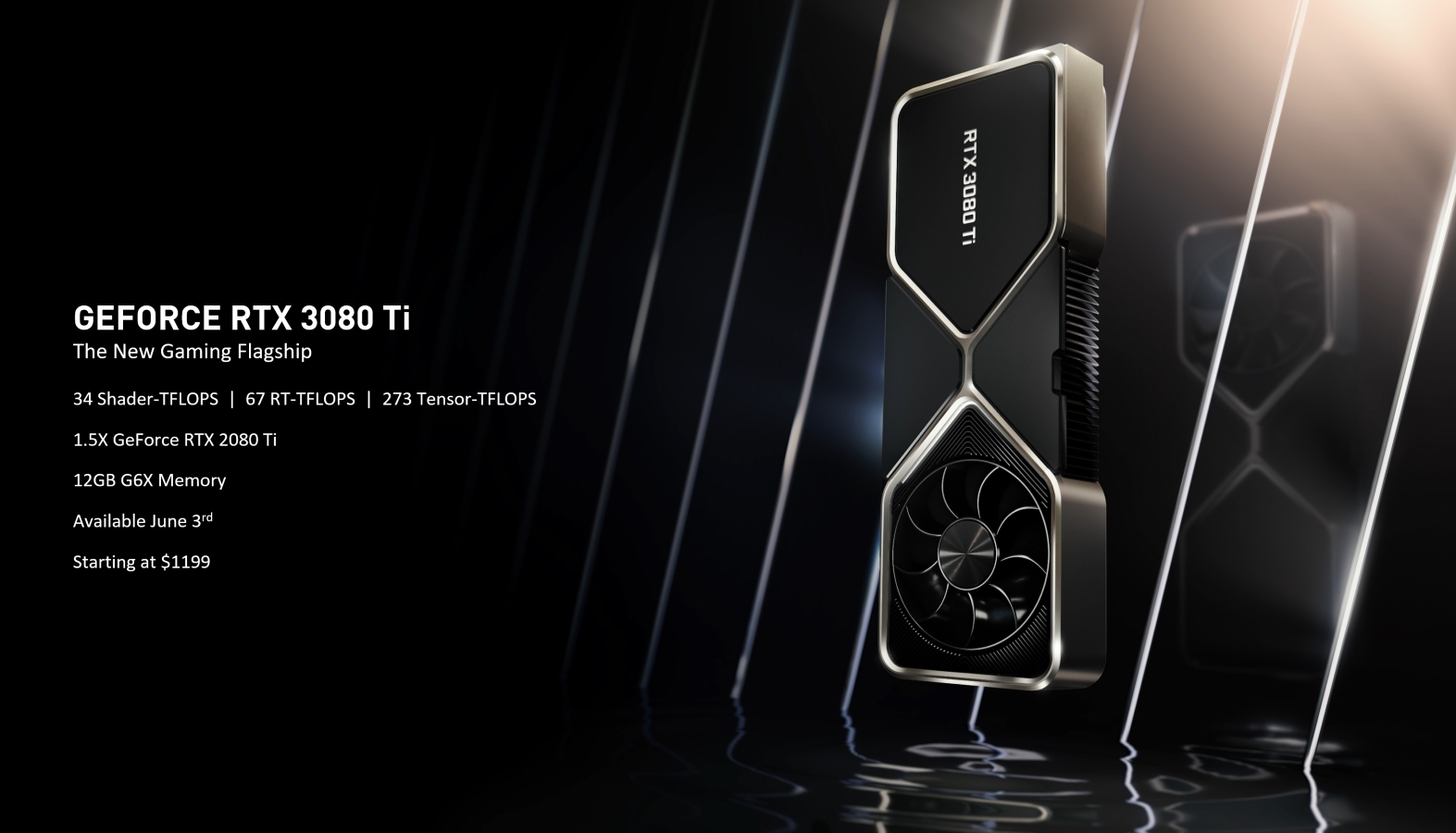 Nvidia’s most popular GPU from the RTX 30 series is getting a bit of a glow up with more CUDA cores and an upgrade to GDDR6X memory over the GDDR6 memory found in the base RTX 3070. Overall it can deliver up to 1.5x performance over the previous-gen RTX 2070 Super, and 2x faster performance than the GTX 1070 Ti. 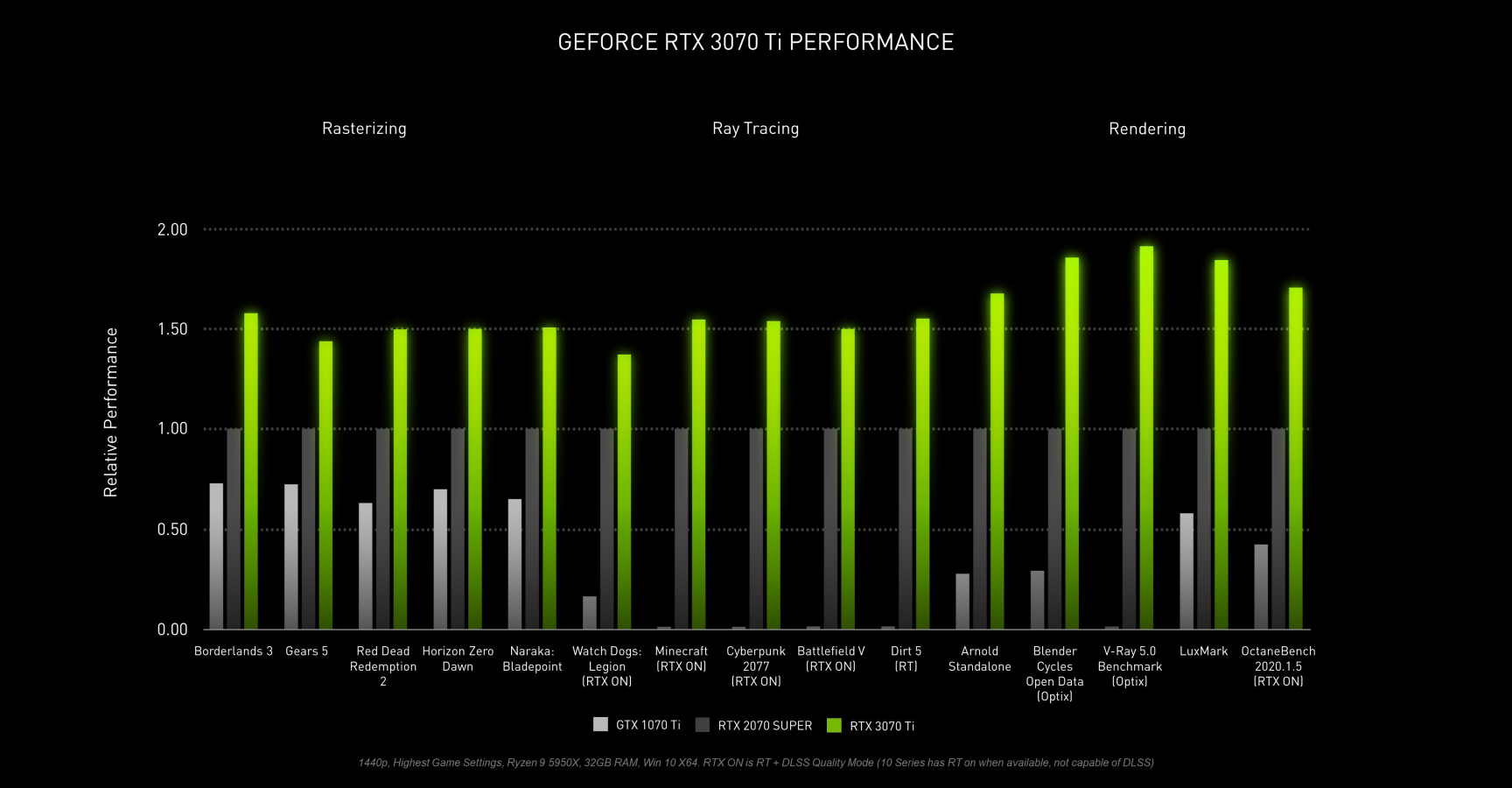 The RTX 3070 Ti will be available from retailers and Nvidia alike on June 10th starting at $599, which is a slight increase of $100 over the previous-gen’s pricing of the RTX 2070 Super. However, that GPU launched at the same price as the non-Super version, so it makes sense for Nvidia to launch the 3070 Ti at a slightly higher price range. 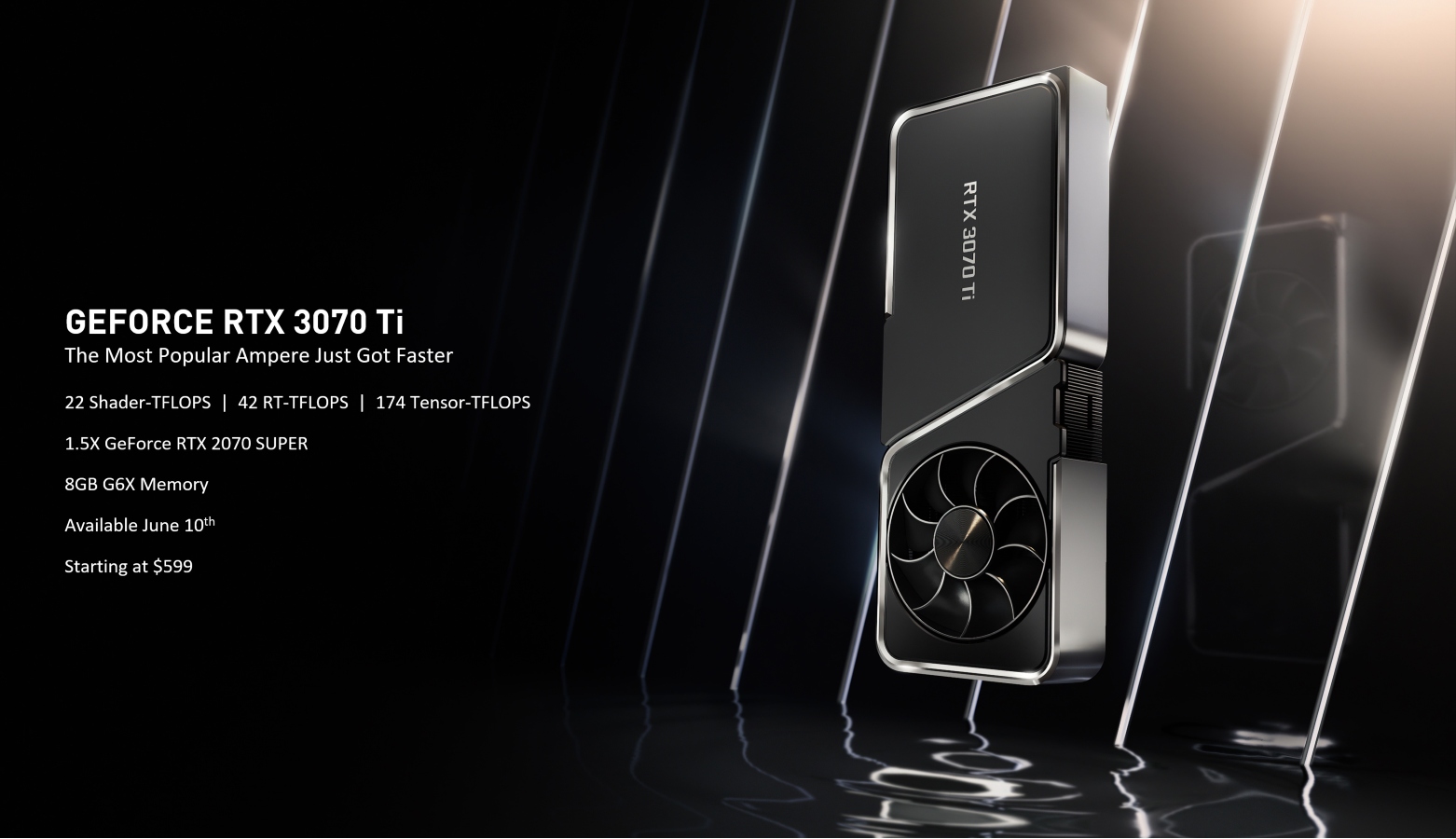 Both the RTX 3080 Ti and RTX 3070 Ti will be launching within the next week or two and both will feature reduced hash rates for Ethereum mining in order to try and deter professional miners. Hopefully it will do the job, but we’re not keeping our hopes up too high.

Thankfully, Nvidia have revealed there will be a limited run of Founders Editions cards for both the RTX 3080 Ti and RTX 3070 Ti, which will presumably be the only way you’ll be able to find these new GPUs at MSRP considering the global chip shortage has still seen inflated prices for graphics cards.

Of course there will also be custom boards for purchase as well including stock-clocked and factory-overclocked models from major providers like ASUS, Colorful, EVGA, Gainward, Galax, Gigabyte, INNO3D, MSI, Palit, PNY and Zotac.

What do you think? Are you excited for the RTX 3080 Ti and RTX 3070 Ti? Which one are you interested in getting? How do you feel about the performance of both cards? And what do you think of the pricing for each? Let us know!

What do you think of the RTX 3080 Ti performance based on price?

A buddy of mine actually camped overnight for the 3080 Ti Launch. It was sad but he did end up getting his card though.

out of stock lmao unless you do reviews on you tube.

That is the correct way to pronounce Ti, yes.

Stands for "Titanium" (the chemical element), has roots originating in their GeForce 2 series and has been contested the same way as GIF vs JIF by people who think they know better than the creators :)

Though this conversation was already had by people a decade ago when the GeForce 500 series came out with a Ti again...the world never learns :D

The video is funny, yes, but let's not pretend it's correct to mock "tie".

it's just a joke, no need to be worked up about it or give lessons about smth everyone knows at this point, although, Jensen himself calls it TI and not "TIE" and he is a CEO

Nowhere nearly as worked up about it as you are about the GPUs you're not even buying :)

I miss normal advertising when the ad just told you what the product is, what it does and how it's better than the rest. Nowdays we just get some abstract graphics and edgy music, with 2 seconds of the actual product and no information - click elsewhere for that "useless stuff"!

The prices here are totaly inacurate.3080 in my country is 3000 euros and Ti version can only be 4500 euros if not more.
December started having crazy prices..

It's not fair or rather a biasing of having few set of details in percent values and few in an absolute value.

1200 USD? Guess it’s not surprising given the current situation

Yep, wouldnt be surprised if they make a 30 series refresh with double the vram next year

Yep in theory 16gb of vram should be standard in upcoming gpu generation, amd is already doing it, these 8gb 3070 already struggle in some games like doom eternal at 4k maxed graphics and watch dogs legion with ray tracing as well, its just matter of time when they start struggling on most new games at 4k.

I totally agre with you, thats why im in no rush to pay for an extremely overpriced 8gb gpu, the 12gb on the 3080ti is nice, but wont pay a used car price for a gpu

hahaha 3080ti for 1200$ msrp... this is such a bad price Also they are not even trying to match official 2080ti pricing which was already terrible for ti model. super meh product

it's business, ofc nvidia will try to make a profit when scalpers are already doing it, if they won't increase the price, the scalpers will and those who will buy from them will do the same thing in the end anyway