Madden NFL 22 revealed, PC edition will not be the next-gen console version

Another year and another yearly EA Sports title has been revealed, this time the NFL-focused Madden series. However, as it turns out like one of EA’s other popular sports titles, the PC version will not include any of the next-gen features, and instead will be based on the last-gen console versions.

That’s another loss from PC players who were hoping to use their PC hardware to play next-gen sports games. Madden NFL 22 follows FIFA 21 which was also based on the last-gen console version for PC. Of course, the excuse given then was that EA did not want to raise the PC system requirements.

That means PC players won’t be able to experience the new “Dynamic Gameday” features that are only available on next-gen consoles like the PlayStation 5 and Xbox Series X/S. Dynamic Gameday includes “Gameday Atmosphere” (which improves crowds and environments), “Next Gen Movement 2.0” and “Next Gen Stats Star Driven AI”. 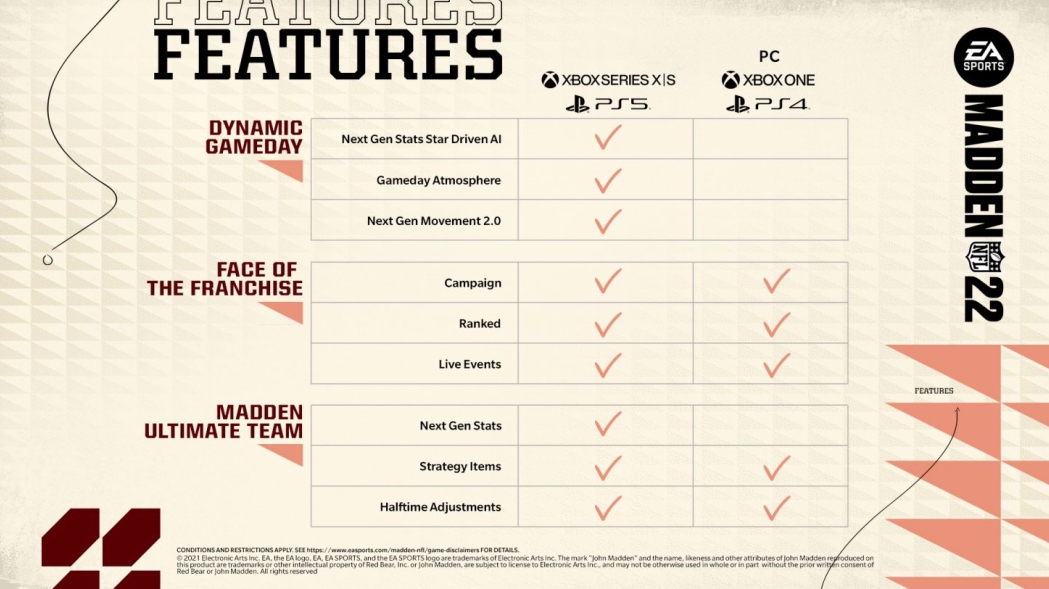 Of course, this means FIFA 22 will likely follow the same path again, with PC players stuck with last-gen console versions. There’s still no concrete answer as to why EA is doing this to PC players, but hopefully with enough complaints they’ll start treating PC as important as console players.

What do you think? Why is EA doing this again? Do you think it’s right for them to not include next-gen version on PC? Let us know!

Are you excited for Madden NFL 22?

Should EA make the PC edition based on next gen console versions?

My speculation is that they are doing this because on pc we'll pay the "old gen pricing". It might be a tactic they use to drive pc triple A prices up.

guess im skipping out on fifa this year on my pc, luvkily my bro has a ps5 so i still play next gen fifa but it wont be the same

It's not like they can't put those features there behind a settings toggle or anything.

Nothing of value will be missed, this game might not release and madden fans will probably not even notice :D

And there are people who will preorder this... let that sink in...

EA can suck my diick