We all know how bad the PC hardware has been lately with the global chip shortage and various other factors significantly reducing availability and increasing prices. Thankfully though, it looks like we may be starting to return to some sort of normality as prices and availability in Europe have gotten much better in the past month already.

The news comes shortly after ASRock recently commented on falling demand for crypto mining GPUs, which seemed to have a positive impact on the prices and availability of GPUs at the moment. The new report, however, mentions that GPUs have dropped in price up to 50%, and sales of cards have doubled since last month.

Whilst they are still higher than the original MSRP, this marks a significant change in GPU prices and availability since the start of the year. It is worth mentioning that the data here is exclusively from Europe, but the US seems to be slowly catching up as one Redditor explains in a handy chart.

User u/gregable on Reddit created a chart that compared the prices and hash rates (crypto mining performance) for GPUs sold on eBay. Essentially the chart tells which cards gives the most mining performance for your buck, and as of a month later the average has dropped by 20%, meaning more cards are being sold at lower prices. You can see this in the black trendline below: 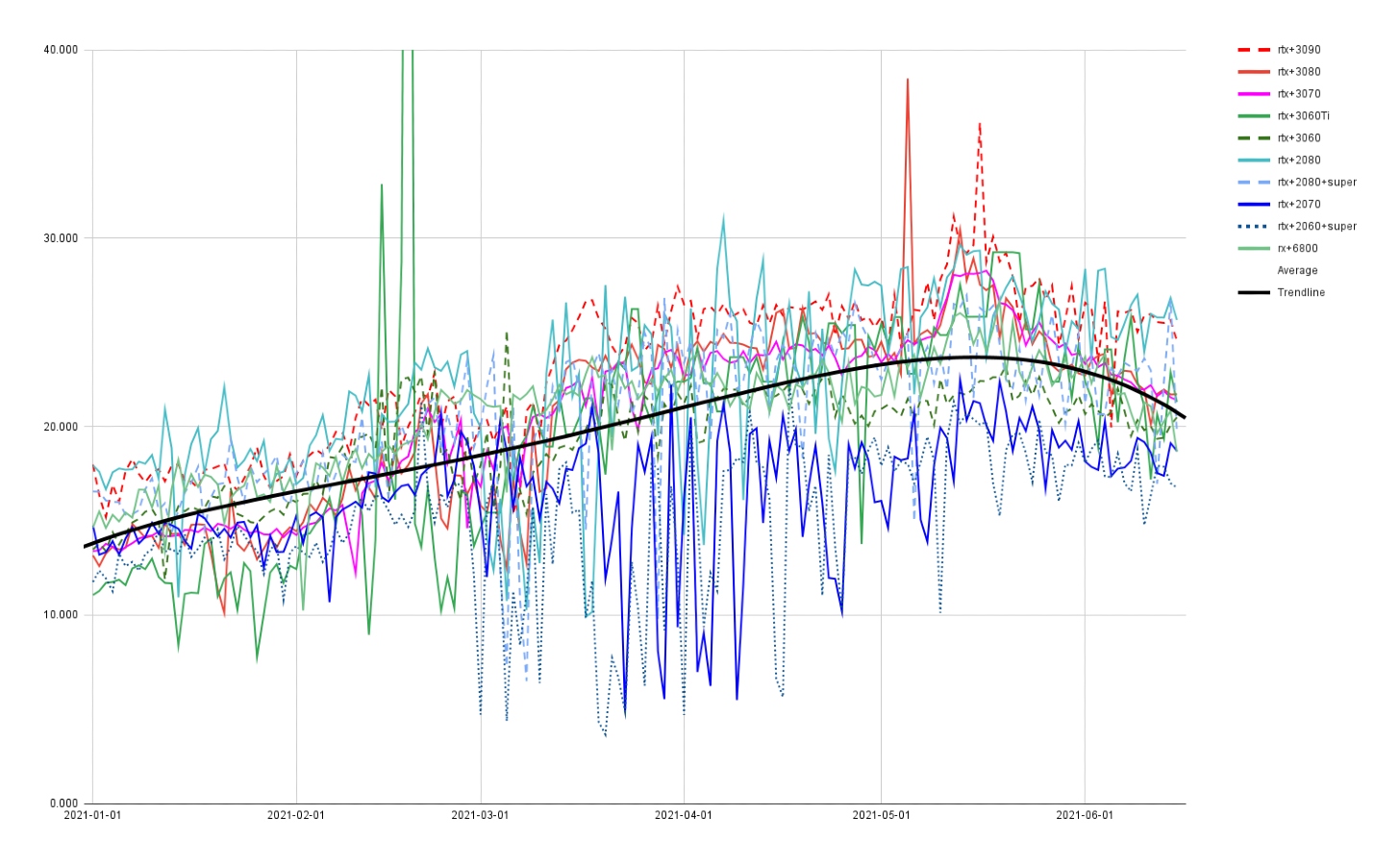 Now it is possible that this all just correlates with the drop in mining demand and prices of cryptocurrencies, which means if crypto prices rise we’ll likely see GPU demand rise for miners and so the prices will rise once again. But it could equally be the start of a the global chip shortage slowly being eased in Europe.

Only time will tell unfortunately, but the good news is that the trend is going down right now. Hopefully it will continue to fall until we see normalized MSRP again, though that may still take a while.

What do you think? Are we just seeing a brief dip in the prices and availability of the GPU market? Is this the start of returning to normal again? Or do you think prices will rise once again? And what has GPU price and availability been like in your region? Let us know!

Do you think GPU prices and availability are getting better?

What has GPU prices been like in your region recently?

What has GPU availability been like in your region recently?

Some improvement but still paying double over MSRP is STILL outrageous... lmao

I saw some improvement, went from having to only one partner model per few cards available to actually having choice between few partner models. Prices are still way too high, but not as much as they used to be month ago, so things are improving slowly. It is still far from where it should be though, so I still won't buy anything, but it is good sign.

They might be falling in some countries, but there is literally 0 stock here since the launch and all of the sites just say "Coming Soon". And as a bonus, the Founders Edition was never even listed...

It's still 110% more than I've paid at launch for a 3080 here so the prices are the same as 1-2 months ago. The stocks are better, but it's because the prices are ridiculous and they kept adding stock slowly.

prices are going down generally but still very high compared to msrp. Just gonna wait for next gen gpus, even if it means a 2 years wait not the normal 1 year

The prices are the same as for a while, but at least in here the availability has improved a lot in a month or so. Hopefully that means price drops are soon to follow now that the availability isn't completely 0 like a while back.

Here they are just as bad

It's not necessarily that the performance is that much better, but you still got a little boost and the 12GB framebuffer is surely better than 10GB. With my 24GB card I can run games at 8K and 10K without crashing, which is great for screenshots or even just playing - I recently finished GTA IV at 8K xD

Yep, 12GB was the trigger to buy this card. I felt like 10 GB isn't enough, some game filled the full memory.

It's a weird decision, considering AMD give you 16GB for the top-tier cards. Could be due to the expensive memory Nvidia chose.

I think it was all about stocks of GDDR6X memory modules, maybe Nvidia was aware about that.. You know, they are only made by Micron. And I think that one company can't satisfy the demand. It's sad that in other generations were used Hynix and Samsung modules too and now it's only Micron.

Does the bundle come with an "I'm a sucker" t-shirt too?

people like you are the reason why we have a situation like this in the first place, buying overpriced cards for 3 times the msrp...

What are you on about? He's not buying anything, just stating the dumb prices. Chill.

yep its gotten better, ethereum has dropped a little bit and it seems it continues to drop. Its so nice to see finally happening, maybe it wont drop as fast all the time but its very refreshing.

sorry i didnt understand your point :/

I hold some crypto too, so whatever drops there are - it sucks for me :P

ah, have you considered selling it? I dont think eth will creep up in price again

HODL lol. Most of it was mined on free electricity and only a relatively small portion I bought, so no biggie. Selling now would be silly - been there before where the price was amazing and then it tanked, only to come back again. I'll just wait it out and see what happens. Also it's not just ETH that I have.

eth didn't just drop a little, it's more like 50 percent drop from where it was, now it's 1.9k, a few months back it was 4k or smth like that, China is banning crypto payments in banks and the profitability is only 3 dollars per day with the difficulty being at 8k. If this continues, we will have normal prices in 5 mth

And which parts will you buy then? Surely you have a parts list, since you always complain so much about stock and crypto. Or is it just empty moaning?

Almost always the same question but without answer. I like your determination to get one

I have a feeling I won't even get one...which it itself is an answer xD