AMD’s RX 6000 series has been going off at a slow start, and they are still yet to properly release some mid-range graphics cards with a single-fan design. Thankfully, a new driver that was released has alluded to the next GPUs AMD will launch, and it’s likely to be soon.

The RX 6600 XT and RX 6600 are both the next graphics cards planned to launch by AMD it seems. At this point, many manufacturers have already submitted listings to the EEC (Eurasian Economic Commission) so we know these cards are coming and will feature the Navi 23 GPU, but when exactly?

In one of AMD’s recent drivers, the RX 6600 XT and RX 6600 were both hidden in the update entries. Both GPUs also have the same “73FF” PCI Device ID, which is the same one used for the Navi 23 GPU in the already-released RX 6600M, so we know these are legitimate entries at least. 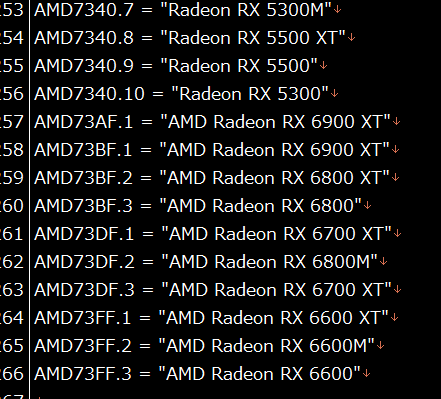 This suggests that we’ll be seeing both cards launch at the same time, and probably within the next quarter too. With GPU prices slowly dropping, we could even see these two cards release at close to MSRP, which is great news for anyone who’s been following the prices and availability of graphics cards this year.

Unfortunately we still don’t know much about specs, but we do know that manufacturers are expecting the RX 6600 XT to feature 8GB of video memory. So by that logic the RX 6600 will either feature 4GB or 8GB of VRAM.

*Specs listed are rumored and not official, and are subject to change.

What do you think? Are you excited for the RX 6600 XT or RX 6600? Which one are you more interested in? And how much do you think either of them will cost in MSRP? Let us know!

Interested in performance, definitely, not sure if buying one, I am more leaning towards 400-500USD category. And I am not really desperate yet, 1070 is still holding well at 1080p. But we will see, feels like both AMD and nVidia will soon have to prepare to compete again, so hopefully we will get releases through whole stack, not them abusing low supply to sell you more expensive parts.

Might be something to take the wind out of intels dgpu launch? As for date they will hold that back as long as they can pump out higher end gpus that are flying off shelves.