Kena: Bridge of Spirits has been delayed once again, this time by just 1 month

The highly anticipated Action Adventure game that looks like it belongs in a Disney film has once again been delayed, although this time only by 1 month thankfully. The developers claimed that the extra time will help “polish the game across all platforms” and to deliver the “best experience possible.”

Kena: Bridge of Spirits was originally scheduled to launch in 2020, but was then delayed to August 28th 2021 due to the ongoing COVID-19 pandemic. That has now been pushed back again to September 21st, which is thankfully only just under a month later than originally planned. 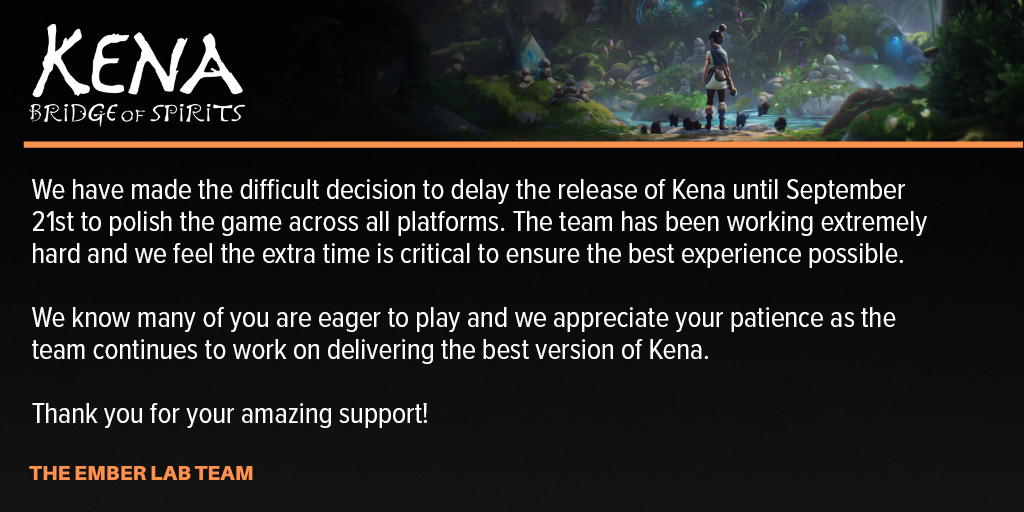 “We have made the difficult decision to delay the release of Kena until September 21st to polish the game across all platforms,” the message reads. “The team has been working extremely hard and we feel the extra time is critical to ensure the best experience possible.”

Continuing on, developer Ember Lab added that: “we know many of you are eager to play and we appreciate your patience as the team continues to work on delivering the best version of Kena.”

Kena Bridge of Spirits is launching on PC exclusively to the Epic Games Store (though is only a timed exclusive and so will be coming to Steam around 6-12 months later). It will also be launching on PlayStation 5 as well.

What do you think? Are you excited for Kena Bridge of Spirits? Will you be getting it straight on the Epic Games Store when it launches? Or will you wait until the Steam release? And how long do you think until it comes to Steam? Let us know!

Are you excited for Kena Bridge of Spirits?