The Epic Games Store launched in December 2018, and in a bid to rival the behemoth that is Steam, decided to purchase up the timed exclusivity rights to several games, something which it is still doing to this day. However, only one game actually made more money than it cost in the EGS first year of launching.

According to some more documents revealed from the ongoing Apple vs Epic court case, despite all the big titles that Epic got a time exclusive deal in its first year of launching, it was the popular indie game Satisfactory that actually made more money than it cost. MG stands for Minimum Guarantee, which is the amount Epic paid the developers to get a timed exclusive deal. 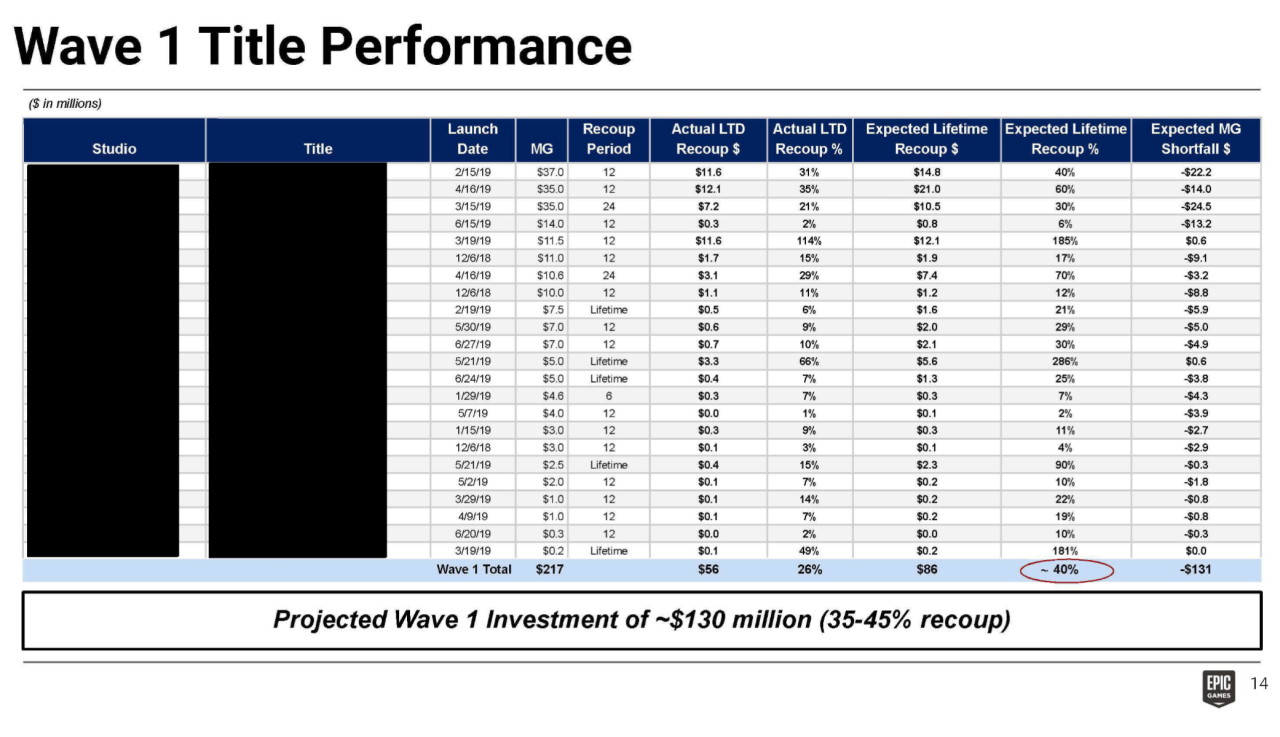 Although the actual game names have been omitted from the image above, cross-referencing the release dates reveals the exact titles. Satisfactory launched on March 15th 2019 and cost $11.5 million to get exclusive to the store, and made back $11.6 million, the only title on the list to actually recoup the Minimum Guarantee cost.

Here's a quick list of most of the games that were revealed from cross-referencing the release dates. Thanks to u/MrBubbaJ on Reddit for doing the work:

*In Millions of Dollars

Interestingly, despite all the controversy surrounding its exclusivity, Metro Exodus barely made any sales back for Epic. In fact, it cost a whopping $37 million to get the exclusive rights, and only made back a fraction of that, which Epic is expecting to lose $22.2 million from.

There’s some other interesting tidbits from the document, but as we’ve seen before Epic is not one to shy away from spending million of dollars on exclusivity rights. They certainly have the cash to spend, and even if it only reaches a fraction of Steam’s success it would all be worth it.

What do you think? Have you bought any timed exclusive games from the Epic Store because you wanted the game so bad? Or did you wait for a Steam release every time? Do you think Epic will ever be able to become as big as Steam? Or are they forever doomed to fail? Let us know!

Have you ever bought an Epic Games Store exclusive instead of waiting for Steam?

So this was the only game for EGS that was... "Satisfactory"

If epic fails, it will be interesting to see what's gonna happen with all those games we all have in libraries. Are we simply gonna loose them ?

I think I bought Ghost recon: Breakpoint on the EGS for less than €5. Somehow, I now have it on uplay store, so uninstalled it from EGS:-)

I bought some of the exclusives, simply because I didn't feel like waiting and I personally never really cared, since I never held Steam as kind of a "god of PC gaming"... I always saw GOG being better than Steam simply for not having DRM with games. Plus I already had multiple launchers and stuff, so adding one wasn't big deal to me. Plus regardless where you stand,...

... Epic did push Valve to improve Steam. So there was at least something good out of it. Otherwise Valve would keep doing what they love to do most, which is nothing. And yeah, I don't look at Valve with rose tinted glasses either, I remember how they fought with all their might to not do refunds, till forced by court to do it and EA already had refund system.... So yeah, I just didn't care.

Haven't bought anything on the Epic Store, although I have happily acquired all the free games that have interested me.

It would seem that agressive money spending isn't how you build a client base. At least in these "short" few years, it seems to have been rather costly.