Get ready to carve through swarms of zombies as the Open Beta for the upcoming Back 4 Blood is about to start soon. But for some lucky individuals they got to try it out early this last weekend, but how well does B4B perform? And what kind of hardware is needed to play it at its best? We take a look at the PC performance benchmarks for Back 4 Blood...

First of all, in this PC performance benchmark article for Back 4 Blood, we benchmark a range of graphics cards going from the higher-end RTX 2060; the mid-range GTX 1060 which is close to the recommended GPU; and to the lower-end R9 380.

Then we go through the FPS test results of each graphics card running at 1080p, 1440p and 4K screen resolutions. From there we can see the performance of the minimum and recommended system requirement graphics cards and consider how well optimized Back 4 Blood really is.

Back 4 Blood unfortunately does not include an in-game benchmarking tool, so for these benchmark results below we started out in the opening area/main hub of the game known as Fort Hope. Unfortunately, the Beta doesn't allow private game lobbies with bots, so we couldn't really perform consistent benchmarking runs in a normal map. However, we did get some results online to see how much of a difference there is between FPS performance in Fort Hope and actual in-game campaign missions.

With that in mind, let's jump into the PC performance benchmarks for Back 4 Blood...

Check your PC can run Back 4 Blood system requirements 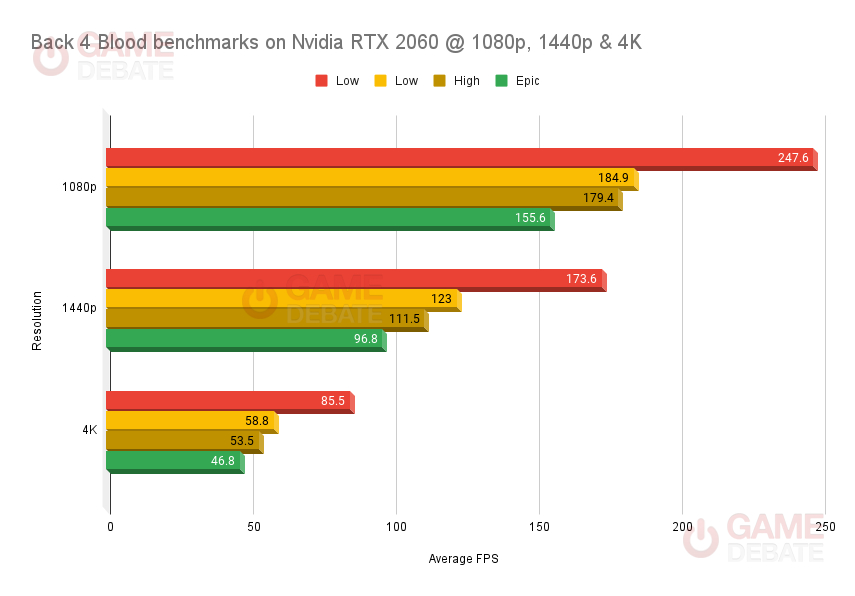 The FPS performance of the RTX 2060 in Back 4 Blood at 1080p resolution is really good, with performance exceeding well above 60fps even on Epic graphics settings. There are some issues with stuttering though which can be seen by the 0.1% Low FPS on Low and Medium settings. However, these can probably be down to optimization issues during the Beta.

Finally at 4K resolution, the RTX 2060's FPS performance is okay. Here, the only settings which achieved more than 60fps was Low graphics, though from Medium to Epic performance is still stable enough to be comfortable to play on. 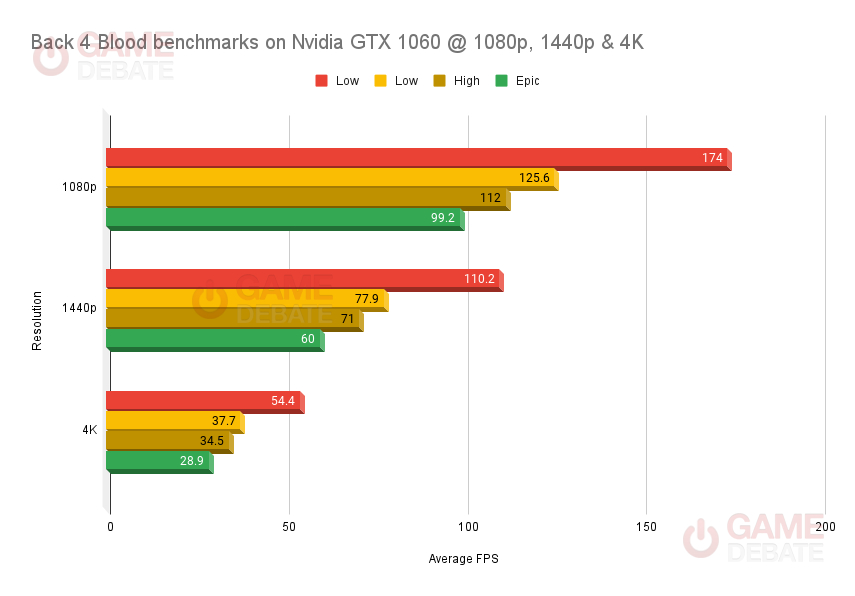 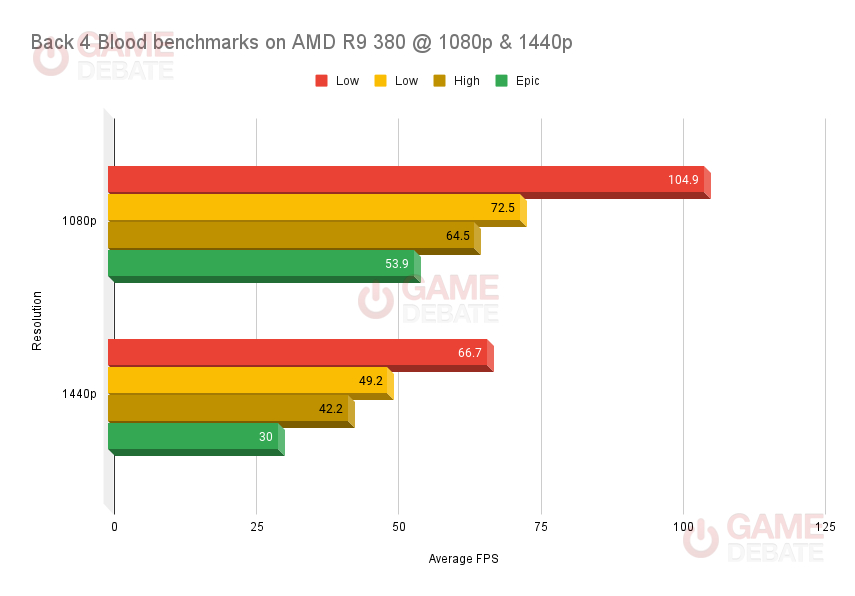 At 1440p the R9 380's FPS performance in Back 4 Blood is not great, though still playable up to High graphics settings. On Epic settings at this resolution the performance was still playable, but dips in FPS can drop below 30fps and become uncomfortable to play.

Overall, looking at the results above the R9 380 is perfectly suitable for playing Back 4 Blood at 1080p up to High or Epic graphics settings depending on your preference. At 1440p performance is still playable, but not ideal, up to High graphics settings.

As mentioned above, the Back 4 Blood Beta does not include any way to play solo with bots, and as such we weren't able to consistently test performance in an area during one of the main campaign levels.

Instead, we benched performance in the main hub area known as Fort Hope, and then compared the performance to playing online to see if there was any major differences between the Fort Hope area and the main campaign levels of the game.

In order to get the most accurate results whilst using the RTX 2060, we got the data on the Epic graphics settings preset at 4K resolution. No other settings were changed in any way. We got two separate benches, one for indoors and one for outdoors, in case there was a major difference between the two.

As you can see above, when playing Back 4 Blood's main campaign levels you can expect to see different results depending on your area of play. For instance, whilst indoors you can expect the same performance, if not slightly better, than whilst exploring Fort Hope.

Overall, looking at all the results above we can see that Back 4 Blood is pretty well optimized even during the Beta. There are some issues with stuttering that can come down to possibly being technical issues during the Beta or driver optimizations. However, it seems like most modern hardware will be able to run Back 4 Blood at a decent performance.

For instance, the recommended GPU for Back 4 Blood's Open Beta is the GTX 970. In our tests with the GTX 1060, which is close to the performance of a GTX 970, FPS achieved was well over 60fps even on the Maximum graphics settings, and even up to 1440p resolution.

Even a low-end graphics card like the R9 380 was able to deliver more than 60fps performance at 1080p resolution up to High graphics settings. We currently still don't know what the minimum required specs for Back 4 Blood are, but we can imagine it will be lower than an R9 380.

We also tested the R9 380 at 4K resolution, however there were numerous visual bugs that could affect performance so we did not complete the 4K benches as many textures wouldn't load in properly for minutes at a time.

It is worth mentioning that is still a Beta and were recorded during the Early Access version before an official driver has been released by Nvidia, so performance may vary during the upcoming Open Beta and at launch.

Additionally, since the Beta didn't allow for solo campaign sessions we couldn't get a consistent benchmark run with random strangers online and so had to get performance during the main hub area known as Fort Hope. Though in our tests actual in-game performance during a campaign mission is relatively similar, but can be up to around 10% less FPS.

As always, we welcome any and all feedback from you guys as well with your experience of hardware configurations and FPS performance/quality settings. That way we can all better gauge how well our systems will be able to run Back 4 Blood.