There’s a joke in the media industry that some IPs just never die, and Bethesda’s Skyrim is on that list. Despite multiple memes and jokes about Skyrim always getting are-released, Bethesda has announced another Skyrim version to launch on its 10th anniversary later this year, and includes a bunch of Creation Club Content.

The Elder Scrolls V: Skyrim Anniversary Edition launches on November 11th 2021, 10 years after its initial release. What makes the Anniversary Edition special this time is the inclusion of over 500 pieces of unique content from the Creation Club like new quests, dungeons, bosses, weapons, spells, and more. 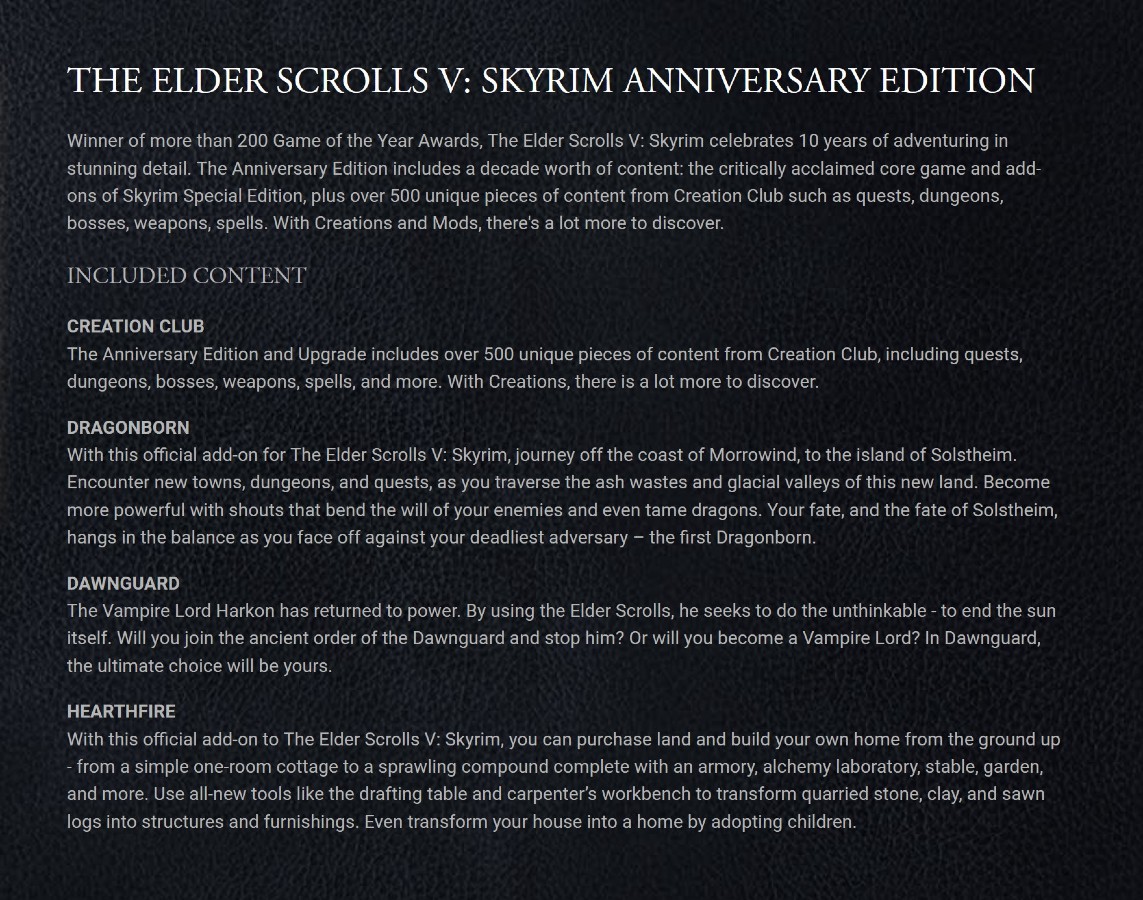 As Bethesda revealed in the message above, Skyrim Anniversary Edition also includes the Special Edition version of the game and all pieces of DLC that have come out since. Special Edition owners will be able to upgrade to Anniversary Edition, though it's unclear whether it will be a free upgrade or cost a little extra (considering mods are free though, a paid upgrade probably won’t go down well with the community).

But, perhaps most importantly, the Anniversary Edition will add a new feature to the game that many have been wanting for a long time: that’s right, fishing. No more diving in the water and swimming around for fish and grabbing them with your bare hands, now you can just grab a pole and fish to your heart’s content.

“It's something I've always wanted to do in Skyrim,” said Ashley Cheng, Managing Director at Bethesda. “You don't have to dive into the water and click blindly anymore. You can now grab a fishing pole, do some fishing quests. It's a great addition to the game, it'll be free to everyone, and it really adds to the immersion of the world.”

What do you think? Are you interested in the Skyrim Anniversary Edition? How do you feel about the new content included? Would you be happy paying a small fee to upgrade? Or do you think it will be free? And is it time Bethesda stops re-releasing Skyrim? Or are they fully aware of the joke? Let us know your thoughts!

How much do you think Anniversary Edition upgrade will cost? In USD

I'd play Skyrim again if it looked like the banner image up top.

So you would pay, AGAIN, for a 10 year old game just because it looks nicer??? You have mods for that bruh....It's because of people who think the same way you do, those lazy !^%#s at bethesda have an excuse to keep re-releasing the same game for 10 years now instead of giving us a new one........

You do realize that the developers would have to remake Skyrim in order to produce the level of detail, the draw distance, and lighting I see above. The size of the game would be several times more expansive. Throw all the mods you want. With the current engine and triangle/polygon placement, they cannot create what is the banner image.

I doubt the developers would put in such an effort.

There is no amount of polygons and other bs that would make me decide to buy the same game for 4th or 5h time dude....Again you have proven my point, instead of investing all that time in 10 year old game, they should shift their focus to a new one...Also yes, i stand by the point i made that they are still, 10 years later or more trying to milk the same old cow for some extra cash....

I could never disprove your point. We are too well aligned.

I merely dared Bethesda to outdo themselves with something that they are, again, unlikely to put in the effort for.

Are they having a contest with GTA V ? 😅

Bethesda going for easy money again ? Yes... I really like this game, I spent hundreds of hours on it (especially on Enderal) but I don't think I'll play it again, at least not if I have to pay for it. However it's still a good way for those who don't know the game or players who were too young at the time to discover it.

TESV: Skyrim might be one of my most played games and i enjoy every minute of it BUT this is jest getting ridiculous, wtf are these greedy corpos smoking lol

tbh honest at this point i might skip this and stick with special edition since i have so much invested in it with tons of mods and different saves... i remember how hard it was going from legendary to special edition... don't think i'll have the time to do it again xD

As much as I love Skyrim, this is getting old Bethesda. I mean it was funny at one point but now its just sad.

Yet another Skyrim re-release? I am shocked and amazed.... :-D But yeah, there you go, Bethesda once again going for easy money with new Skyrim release. I would laugh about it again, but knowing that they will make ton of easy money, it is not even funny anymore. People really need to stop buying Skyrim. Otherwise this will keep happening forever, same as GTA V.

As for how much it will cost, probably it will once again reset game price to 60USD, unless Bethesda got extra greedy and wants next gen 70USD. Upgrade will likely be at least 20USD, if not more. Like don't get me wrong, it should be free upgrade by now, but we all know that isn't happening. AAA-pitalism, of course they will want to max out profits. I do hope Bethesda was competent enough to actually get permission to use mods from modders though.... otherwise prepare for another news cycle about that. :-D

Everyone complaining in these comments is going to get it anyway....

Yeah anyone who is actually retarded....

Witcher III is boring lol could never get through the whole story whereas Skyrim I've beat multiple times. It's just more fun and that's a consensus. Keep hating just to hate, doesn't make you cool and nobody agrees with you, if you don't like it then don't buy it.

I only have one word for this: Interesting!

Don't get me wrong, Skyrim is an amazing game I spent countless hours on but Bethesda still trying to milk that old cow for little bit more cash?? If you buy it, again don't get me wrong but you're a retard.....They keep re-releasing a 10 year old game without even mentioning the next elder scrolls or pretty much anything. But hey that's just my opinion...

HE CAN’T KEEP GETTING AWAY WITH IT

Bethesda, is this april first? Can you jokers actually make a game anymore? I hope you actually paid for the modders for their work instead of just giving ''publicity'', right..? The cash cow was dead on the third go, stop! What a sorry lot of losers. I'm glad we stilll have the likes of Skyblivion team actually working on something!

Anyone knows will this be on pc? Couldn't find the answer on where I searched.

It definitely will also be on PC

why is it not out on my toaster yet?

just like gtav, that game has been in the last 3 console generation as a refresh or upgraded version

Oh COME ON. Seriously Bethesda?? If all you are doing is including mods to skyrim this is a pointless re-release, at least redo the game or fix bugs, anything! Not take others peoples work and slap it on for a makeshift 'version' Wtf.

If its a free upgrade I do not want it, if you decide to force it on me or anyone else no one is going to be happy. I would've been fine accepting an actual updated engine, bug fixes and extra OFFICIAL content. Not someone else's work that you try to make your own.

I agree, this is ridiculous