Whether you’re on old or new hardware, games are getting pretty demanding these days and require new solutions to make them run better. Nvidia’s DLSS and AMD’s FidelityFX Super Resolution have come a long way to help with that, but Intel recently confirmed they are also working on their own version, and have even given us a brief glimpse of what it could be like.

Known as Intel XeSS (Xe Super Sampling: a reference to the Xe architecture in their new graphics cards) and just like AMD the technology will be open source to all, meaning it will work on any GPU regardless of brand like Nvidia, AMD, and of course Intel’s upcoming Arc series starting with Alchemist launching in Q1 2022.

Intel claims XeSS will provide up to double the performance on your GPU, and the SDK is being made available to developers later this month, so we could see some more examples of the technology running in games soon. However, it will only be officially available to the public in 2022, when their new GPUs launch.

There is a caveat with enabling support on other brands of hardware though, as Intel’s upcoming Alchemist graphics cards will include dedicated AI acceleration silicon for best performance with XeSS thanks to something called XMX. Though it will work on other GPUs thanks to an instruction known as DP4a. The latter will work, but not as well as Intel’s own hardware (check out the image below for a demonstration, the shorter the bar, the better): 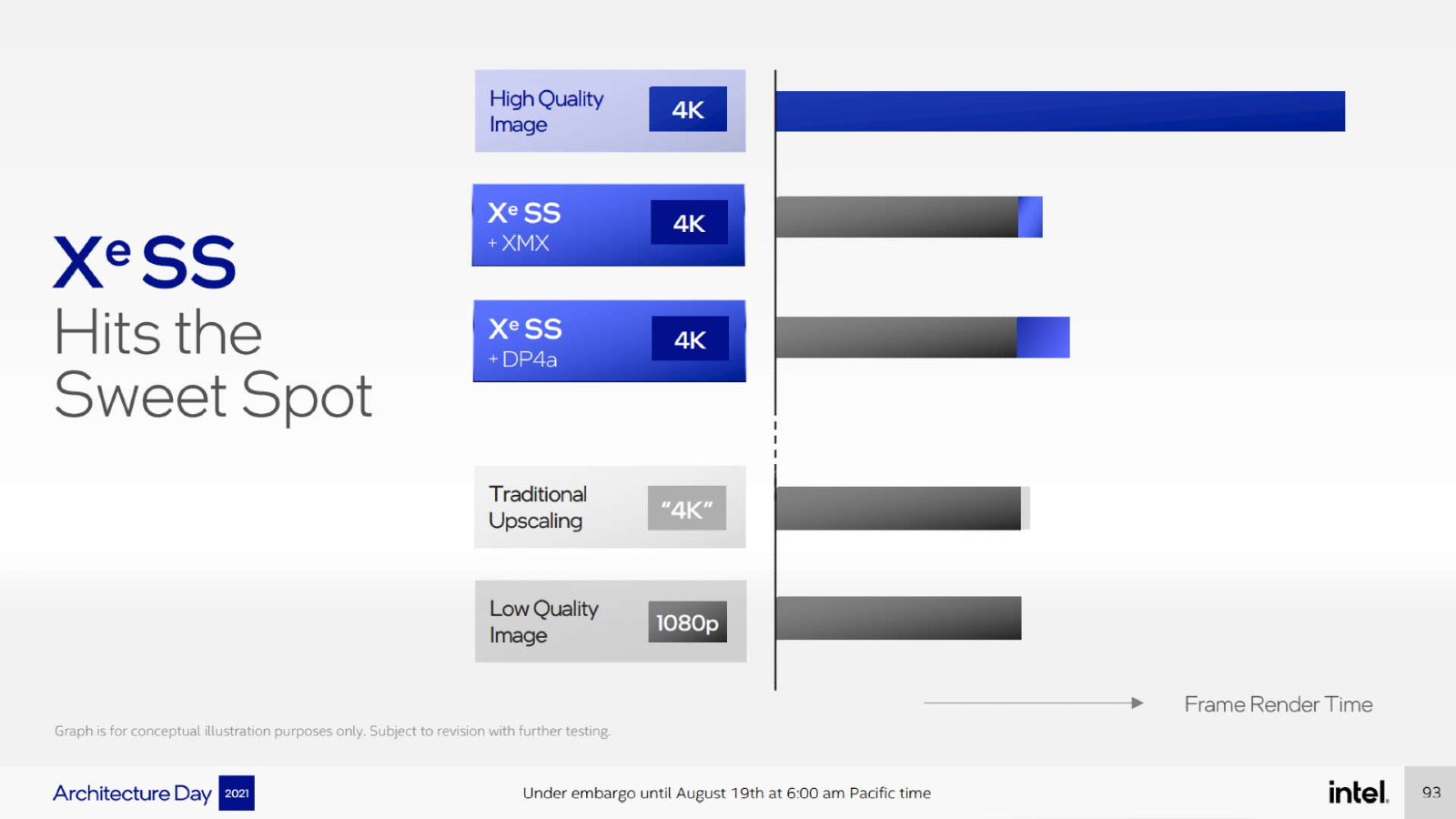 So far it is unclear whether Intel will be offering several different quality options like DLSS and FSR do, as they are currently focusing on just upscaling 1080p images to 4K. Essentially, their idea is if you currently have to play at 1080p due to hardware limitations, then you can play at a smooth 4K with XeSS enabled without any compromises in performance.

What do you think? Are you excited for Intel XeSS? How do you feel about it being open source and available on all GPUs? How could this affect DLSS and FSR? What do you think of its quality so far?

What do you think of Intel XeSS quality?

wonder if it'll use the tensor cores in NVidia gpus with xmx. if it does, that could make things real interesting.

A very slow camera pan of a predictable demo that has no variability looks okay...I would hope so. Once its in games we will probably have a better idea of the quality.

I can't wait for Hardware Unboxed to give it good detailed look in games, it looks good, but then again, when didn't tech demos look good... :-D

Yeah, I really like their in depth look into these technologies. :D