Multiplayer games have long been dealing with cheaters ever since multiplayer games were created in the first place. Thankfully, since then studios have incorporated various anti-cheats for their services, but most of the time this doesn’t seem to do enough, and hasn’t stopped cheatmakers from developing tools before games have even been released.

Such is the case with one cheatmaker who now claims they are selling Battlefield 2042 cheats before the game is even out. You can see below the kind of hacks this particular cheatmaker is offering players who are interested in BF2042, including the classics like Aimbot, ESP, Cheat Radar etc.: 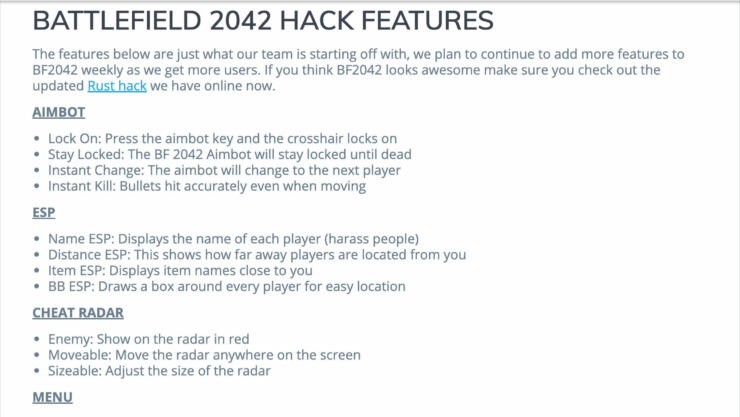 The worst part is that the cheatmaker claims these Battlefield 2042 hacks are “safe to use” and so they won’t be caught or at least won’t have to deal with any severe consequences. The site also states that apparently developers can’t access the “advanced features like safety shields or proxy IPs” in order to actually ban cheaters.

Additionally, they say that they update the cheats “the second a new patch comes out from the developer.” It could certainly be a lie as an attempt to scam desperate players out of their money before the game is even released, or maybe they are overconfident that their cheats will work in BF2042 when the game launches.

Either way, it seems like hackers aren’t going anywhere, and the cheating scene around multiplayer games is only growing bigger. Maybe this will force developers to think of new solutions for anti-cheat, and with Battlefield2042 featuring only multiplayer modes and no single player campaign, preventing cheaters is arguably more pressing now than ever.

What do you think? Do developers need to create a better anti-cheat? How can they spot and prevent more cheaters in their games? And how can a cheatmaker sell hacks before the game is even out? Let us know your thoughts!

How often do you encounter cheaters in multiplayer games?

i hope a DRM gets made that will brick hardware if cheats have been installed, not even used

Yup, and that ladies and gentlemen is why I would not even pay a slightest thought to this game if there were no bots and I wasn't able to lock my own server so I can play alone and have my experience unspoiled. Good thing dice finally thought about players like me, and this I have no problem to hail with a preorder.

The !^%#? Why would you ever get yourself a multiplayer focused game to play solo against bots?

To chill, to have fun or for immersion. You can make WW2 settings and not have people using wacky strategies. I like the competition of online, but sometimes I wanna play alone.

I am not surprised, they know game will be very popular and some people make a lot of money on making those cheats. Like don't get me wrong, I hate online cheaters just as much as anyone else. But it pretty much is its own industry and they will start doing them as soon as they can get access to any sort of early client or whatever they can to at least reverse engineer it. Because when they make money, you make most of it if you are the first one out with it.

Though I do hope EA will combat cheating and keep things relatively safe from cheaters. But it always will be cat and mouse game. But it comes with open nature of PC as platform. It is bit of the bad that comes with the good openness brings.

only thing I dislike about PC gaming is rampant cheating

LMAO, enjoy the multiplayer then...

unreleased game cheats or hacks is like those sites that give acc that had premium accounts which all didn't work.

I've recently started to frequently play Battlefield V with some friends and it's rare to don't find a lobby without a cheater either in our team or enemy team. Thing is they are subtle with the cheats they use, at least most of them.

i voted sometimes, because i remember playing bf3 in metro map or whatever bf game was and the cheater was const shooting me through walls i even have posted the video on youtube. And other cheaters i mightve encountered but i quickly forget about them. I usually play dota 2 where there're scripts there and ive seen it. If i played with cheater there i don't know. Probably.

yeah and the irony is that publishers ask real money without even fixing the problem. I play Rogue Company now and earlier played Paladins and I have encountered cheaters in both of them but I would say Rogue Company has the worse of the cheaters issue. Almost every match there is one who is wall hacking or straight up Immune to damage.

Even with cheats people are as bad as me. I suck at shooters but i dont use cheats. The only cheat i mightve used and i think it was a feature is in diablo 2 to see all the map.

Are you excited for D2R?