If you saw the Gamescom 2021 Opening Night Live show this week, then you’ll know one of the highlights was the official reveal of a Saints Row reboot, aptly titled by modern trends as simply just Saints Row. Unfortunately, a lot of details weren’t present during the show, but we now have more information regarding the upcoming reboot and what it means for fans of the series.

Fans have been asking for a new Saints Row game for a while now, but it's clear where the developers left things in Saints Row 4 didn’t leave a lot of room for innovation. So, instead the creators are now developing a reboot, with new characters, a new sandbox open world to explore, and new toys to play with.

Perhaps the biggest question, regarding the recent Saints Row 3 Remastered exclusivity on the Epic Games Store, is whether the new SR reboot will follow suit. Unfortunately for Steam heads, the upcoming Saints Row reboot will be a timed exclusive on the EGS, though we have no idea how long for. However, based on previous timed exclusives you can bet it will be at least for a year.

Another interesting tidbit of information is the Saints Row game editions, and more specifically, the already-planned DLC. Now that the game is up for pre-order, we know that Saints Row will feature a Standard, Gold, and Platinum edition each with their own benefits. Check it out below: 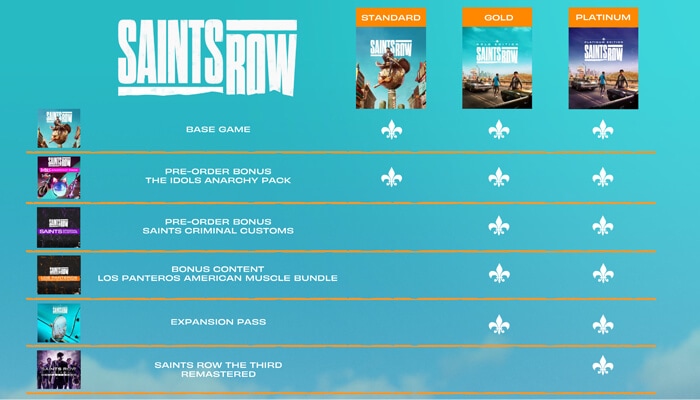 The description for the Expansion Pass claims that it will deliver “new missions and gameplay across three distinct expansions, each adding their own content to discover within the world of Santo Ileso.” So expect 3 major expansions coming to the game after launch.

There’s still a lot more to learn about the upcoming Saints Row reboot, which we will hopefully learn more about leading up to the game’s launch on February 25th 2022 for PC via the Epic Games Store (coming to Steam later), PlayStation 4, PlayStation 5, Xbox Series X/S, and Xbox One.

What do you think? Are you excited for the Saints Row reboot? How do you feel about the series being rebooted? What changes/improvements would you like to see in the new game? And what are your worries? Let us know!

Are you excited for Saints Row reboot?

Well, considering they are giving SR3 remaster away for free, this feels like one of worse plans for launch. It however does combine into bit of worrying trend that can happen when developers don't need to care about sales, since be it Epic for exclusivity or Game Pass, they will get their money anyway. So they basically don't care about whether people will like it or whether they have to cater to gamers, just do whatever you want, cash in on the name and move on. However if they pull that off, they will eventually feel it pretty hard, once Epic stops buying their exclusivity and they have to rely on good grace of the gamers, you know ones they will likely piss off. I am all for giving new game a go, but cracks are starting to show. In any case, I will see what comes out, it is not like I would preorder it anyway.

thats the only good decision they made, they saw that they will make no money out of this so they made deal with epic to earn atleast something

Maybe I'll pick it up when the Epic Store offers it free, then.

Another one of those game's I'm only mildly interested in being an epic exclusive.. Oh well, bummer. ¯\_(ツ)_/¯

Platinum Edition? More like the Pointless Edition. Personally I don't mind where it comes out as long as it comes to PC but this game is already starting to feel like bit of a mess.

Once again any interest is lost cuz of EGS's bs. =-= Oh well at least they can test the game before everyone else and can get info about it before it properly releases everywhere else.

Imagine paying $10 more for a free game that's broken and hasn't been patched since launch.

Yeah, WTF - we literally just got the 3rd remaster for free 🤣

This launch clearly isn't planned out well. They hid the number on the EGS, but I could find it on the Xbox store.