Despite the troubled launch last year, CD Projekt Red is not giving up on their recent new IP. Between all the bug fixes and patches, the team is also working on the first major expansion for the game, and the studio has recently clarified to investors just how many are still supporting the base game, and how many are working on upcoming content.

We still have no idea what exactly the first expansion for Cyberpunk 2077 will be, but thanks to a recent earnings call, we at least know that around 160 people are currently hard at work on it, which is nearly a quarter of all development staff at CDPR. Additionally, Just under half the studio are still working on supporting the main game and developing the next-gen version. 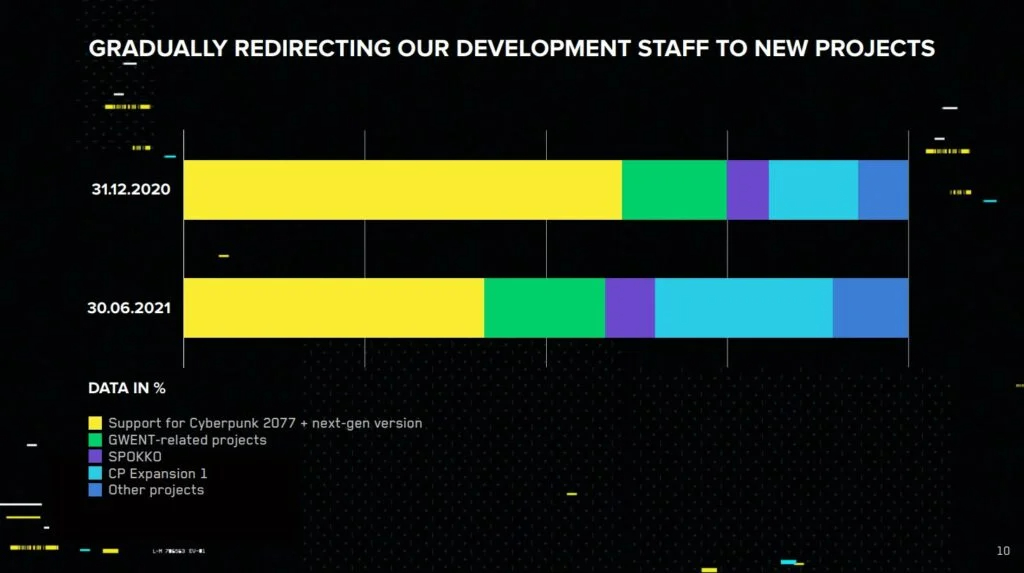 “The next-gen version is an important step on our adventure in the Cyberpunk universe,” said Adam Kicinski, joint CEO. “We strongly believe in the long-term potential of this IP. That’s why we’re currently working on the first expansion for the game, although I cannot say anything for more about it at this point in time.”

“In accordance with our promise to gamers, we intend to keep improving Cyberpunk for as long as it takes.” But some of the development staff are already working on some unannounced AAA products, Kicinski said: “Meanwhile, we do not lose sight of the bigger picture: we want to develop other products based on our franchises and to keep growing our core business.”

A small chunk of the staff are working on Gwent-related products as well as the Pokemon Go-style Witcher: Monster Slayer game, developed by Spokko. Interestingly though, Kicinski mentioned the first major expansion is still very early in development, and they are not ready to announce a release date or price yet. So don't expect it anytime soon basically.

What do you think? Are you excited for CP2077’s first major expansion? Will it interest you back in the game? When do you think it will be released? And how much will it cost? Do you think Cyberpunk 2077 has long-term potential? Let us know!

Are you excited for Cyberpunk 2077 first major expansion?

I just wished they'd give us back proper ultra settings. Even on ultra pop in is just absolutely ridiculous making the game look terrible and the world even less believable. Gets worse with every update they push.

Not really excited, since game isn't fixed yet. While it is better, it still isn't anywhere close to where it should be in many areas. Some of which more or less just got band aid fixes, so issues are less apparent, but still there. And I am stating to doubt those will ever truly get fixed as CDPR is shifting staff towards new content. But then again, I always said game needed 2 more years of development and you can't squeeze that into 1 year. Shame, but I doubt this will ever get comeback that No Man's Sky got. In any case, I am over with CDPR, they have proven themselves to be just another corporation and I will definitely be hesitant to buy their next game..

No matter the state of the game, the world of CP77 is magnificent! I want a sequel, heck, the map is so large and High Quality they could just use it again without much changes, but more juicier interesting content. And this time around they could deliver a game which would be remembered forever more.

I mean i think people would call it lazy if they just reused the map, so at least expand the map with more content

The ppl would that alright. Without a second thought too. *shrug*

The launch was what it was but the game is in a much better place and i am happy they have started working on the DLC as it gives the fans of CP2077 something to look forward to. Improvements need to be made but we also need new content.

The pathfinding will basically never be reworked, just like I suspected xD

Yay! Now only if they could do more meaningful things... 🤣