Ubisoft’s recent success with the latest Viking-themed Assassins Creed title has pushed the developer to produce more content for the game outside of its first year of post-launch content. So far we haven’t heard anything more about any upcoming major expansions, but Ubisoft has revealed an updated roadmap for Fall 2021.

After the Siege of Paris DLC launched last month, Assassins Creed: Valhalla will be getting some small game updates leading up to Fall 2021, which will include two title updates, a new River Raids Map Pack, and a new free Discovery Tour expansion. The first game update and second River Raids map pack have been released today (September 7th), with the remaining content planned for sometime in Fall 2021. 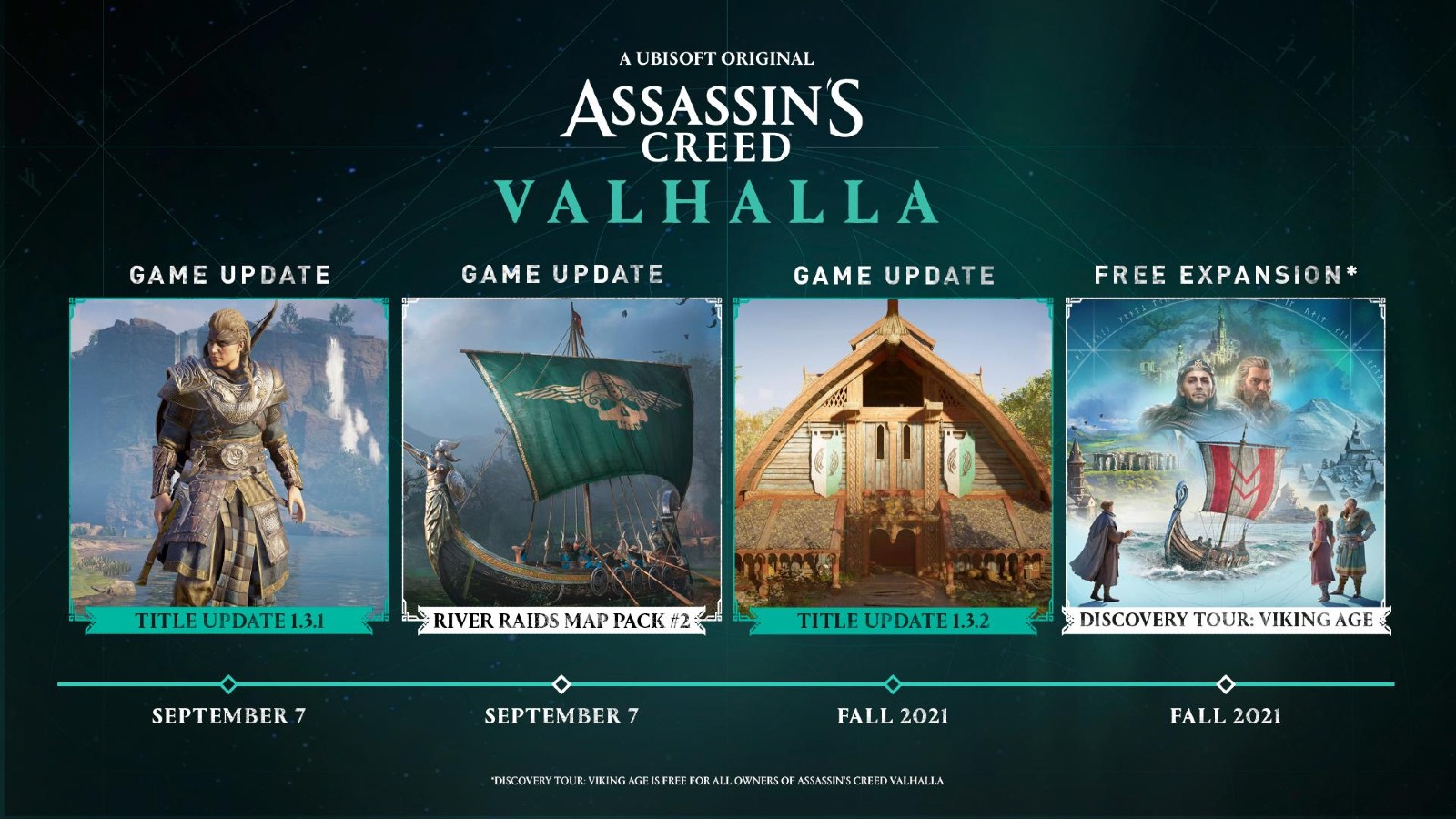 Ubisoft has confirmed they are working on more major expansions (plural, as in multiple) for Year 2 of AC Valhalla, and have already teased a more mythical approach in one of them. Hopefully we’ll learn more later this year as AC Valhalla moves into its second year of post-launch content.

What do you think? Are you excited for more AC Valhalla content? Is this your favorite entry in the series so far? Or does another entry take the crown for you? And what would you like to see in terms of Year 2 post-launch content for Valhalla? Let us know!

They should fix the sound quality

The first DLC was really average. I really liked the second one though. A better story and especially better assassinations, finally!

The main flaw is exactly what PhenomFaz said : they felt like fillers. Separate stories, not extremely important.

I was expecting a very mythology-focused DLC like The Fate of Atlantis for AC Odyssey. Maybe for the next one?

IMO, river raids are fun but you get bored of them quickly, especially when you've finished the game and spent over 150 hours on it.

If I am caught up correctly on all things AC they do have a mythological DLC in the works called Ragnarok planned but most likely it will release next year i.e. Year 3.

AC suffers from its own design or rather the change of it to an RPG. I always liked the older AC gameplay. It was a particular flavor and if you bought AC you knew what you were getting into. Now the pressure to be an RPG and have a very long story leaves little room for the protagonist to span multiple games or have DLC that is pertinent to the main story because people will blame them for not wrapping up the main story in the main game and using DLC as bait. It is an unenviable position.

Geralt in The Witcher has spanned in multiple long games but not every game should aim to be long or be an RPG. That just leads to every game being similar. Older AC was a unique blend of structured story mission with social stealth and side activities thrown in. They should have embraced and vbecome more like Dishonored rather than what they are now. Of couirse all of this is just my opinion.

The evolution of these games... an interesting topic. I really liked the first AC... and I also really like the last 3. But rather than suffering from becoming RPGs, I think these games suffer from their length.

For me, the length of the new AC is a problem.

Of course, no one has to do everything but these games are too long for their own good. It dilutes the storyline, there's way too much repetitive content. That's why I liked the 2nd DLC : a better told story, more compact, a smaller and better filled map.

I think if the first 2 The Witcher had been as long as the 3rd, somehow it wouldn't have worked as well. We would have gotten bored of it faster. But I agree that the old AC often managed to offer something unique, whereas the new ones have more difficulty to renew themselves. Ok, Valhalla's lifespan is exceptional and new content is often added but if players end up getting bored and if it gives the next game a repetitive feel, it's more a flaw than an advantage.

The story in AC Valhalla was nice including the sparse modern day developments ending with an Isu sage being reborn. However the DLCs felt like filler as Eivor's journey had ended in the main game itself and the DLCs do nothing to further the lore about the Assassins. They should just release the Ragnarok DLC now instead of river raids.