It seems to be delay season this week. First was Total War: Warhammer 3, then it was Dying Light 2, and now the highly anticipated next entry in the Battlefield series has also been delayed. Thankfully not by long though, but due to “unforeseen challenges” Battlefield 2042 is now launching in November 2021.

Originally, BF2042 was supposed to launch on October 22nd, but recent rumors reported the ongoing COVID-19 pandemic has created challenges during development, which EA confirmed recently: “We’ve made the decision to shift the launch of Battlefield 2042,” EA said in an official statement. “The game will be released worldwide on November 19th, 2021.” 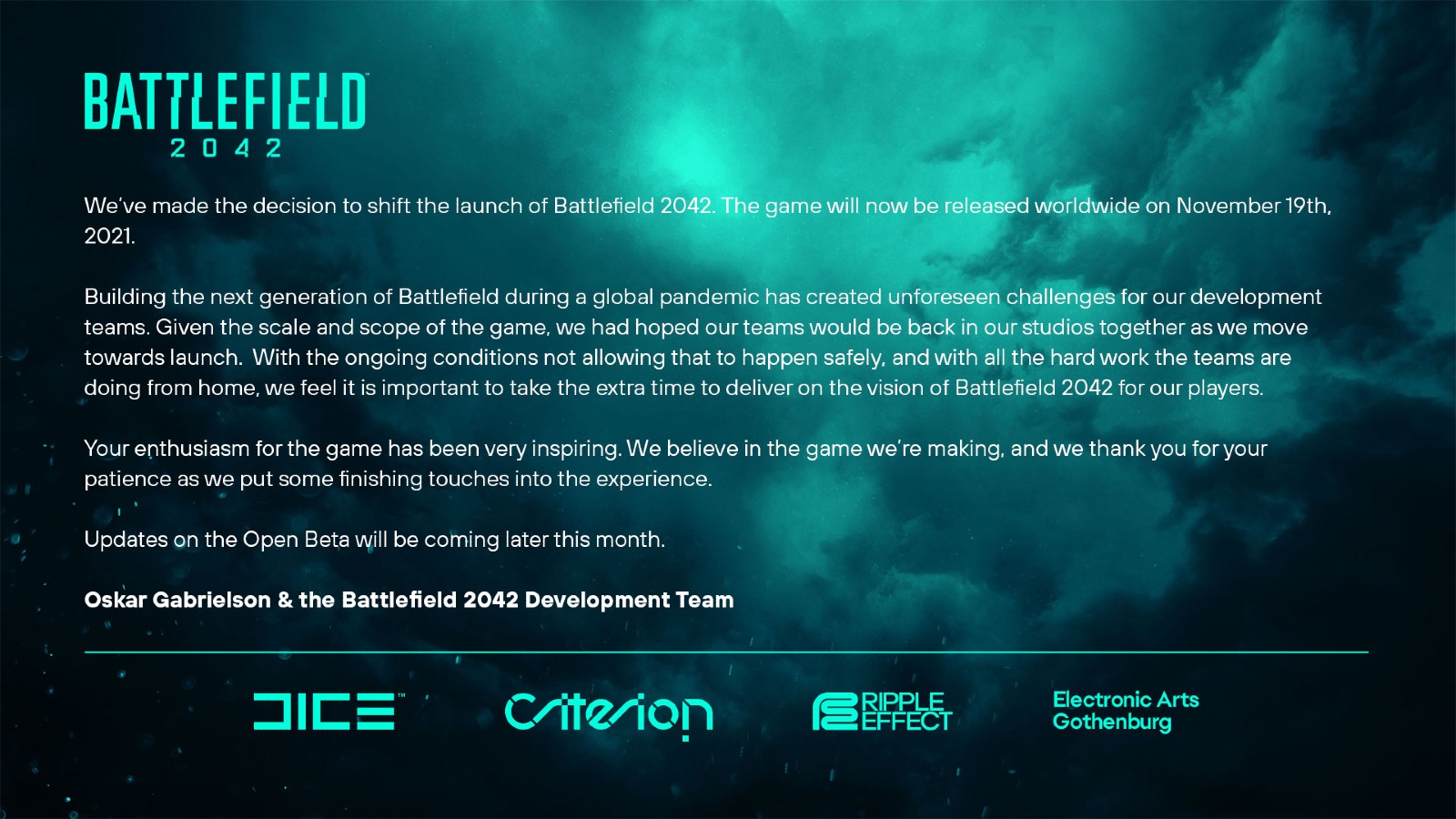 “Given the scale and scope of the game, we had hoped our teams would be back in our studios together as we move towards launch. With the ongoing conditions not allowing that to happen safely, and with all the hard work the teams are doing from home, we feel it is important to take the extra time to deliver on the vision of Battlefield 2042 for our players.”

There’s no indication whether this will be affecting the planned Open Beta for BF2042, as EA announced a while ago that it will be coming in September (and rumors have recently pointed towards September 22nd). With the delay, it’s possible the Beta will now get pushed back until October instead, but EA did mention that updates on exactly this “will be coming later this month.”

Battlefield has always been a major competitor against Activision’s Call of Duty franchise, and with the next game, Call of Duty: Vanguard, launching on November 5th, that’s only a two week window to leave for some breathing room. We’ll just have to wait and see how this affects players.

What do you think? Are you excited for Battlefield 2042? Do you think the Beta will also be delayed? How will this affect COD players and vice versa? Let us know your thoughts!

Do you think the Battlefield 2042 Beta will be delayed as well?

They just wanted to release after call of duty vanguard probably.

Its a live service so no surprise there. After all live-service games adhere to their divine doctorine of its not how you launch but how you end up nonsense.

But them delaying kind of contradicts what you are saying, no?

Not really. Them delaying this close to launch is an indicator the game isn't quiote ready yet and a month of delay isn't going to magically fix that. After all tech is science not magic.

They need to delay it quite a bit to get it ready if they are delaying this close to launch so yeah my inital statement still stands true as is witness by the countless examples in recent years of live-service experiences, not games but experiences. Just saying it makes me throw up a little.

Delay it until 2022. If delays are necessary that means that the game is not close to being in proper release form, so just release it in March to April of 2022.

agreed, rather pushed back than have some of the issues I still get in BF5. had a game yesterday where all allies has no texture. just like a white "green screen costume" and no animations