A recent patent has been unearthed online which shows Valve is interested in a technology that will let you play games as they download. This is not necessarily a new concept though, as Ubisoft, Origin, and Battle.net have all done the same kind of thing, but Valve’s patent could be a more streamlined version of the technology in comparison.

The patent, known as “instant play”, will track the read operations of a game file in order to prioritize which files get downloaded first, letting players start the game as it downloads. Additionally, it will also free up space by “client-side discarding and prefetching” which can also help reduce latency. 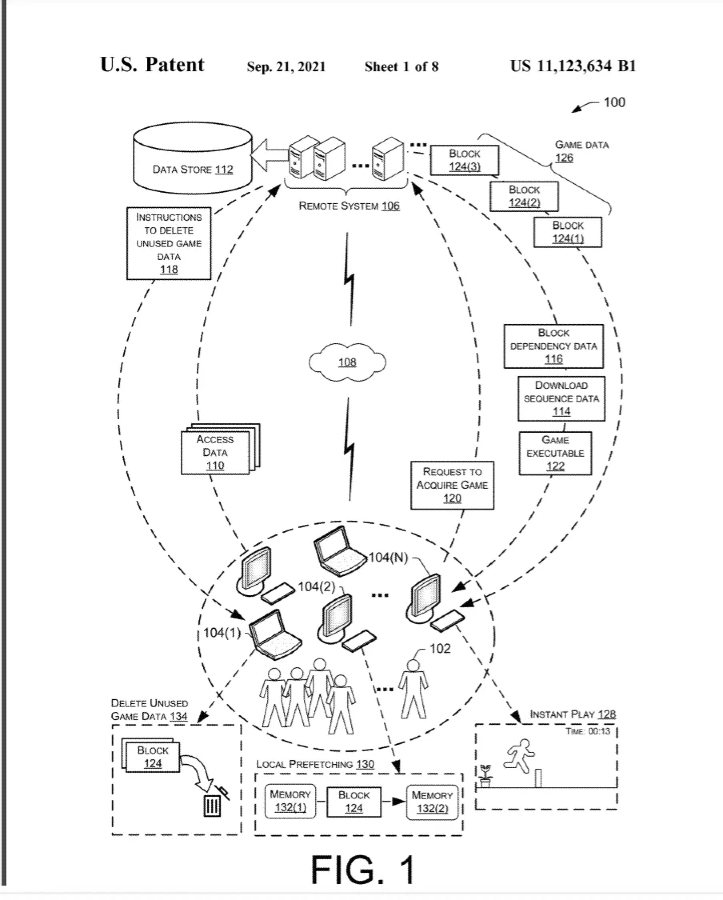 "This telemetry approach allows the remote system to collect access data reported by multiple client machines, to catalog the access data according to client system configuration, and to analyze the access data to generate data that is usable by client machines to implement various game-related features including, without limitation, 'instant play' of video games, discarding of unused blocks of game data to free up local memory resources, and/or local prefetching of game data for reducing latency during gameplay."

Whilst Ubisoft, Origin, and Battle.net have all used the same sort of technology, those were limited in what you could actually play (mainly sticking to tutorials or menu screens). Whereas Valve’s patent could theoretically let you play the game without limits on what you can actually play.

That should definitely help with the problems of Valve’s unpacking feature when pre-loading games, as most of the time you’ll have to wait a while after the actual release date in order for Steam to fully unpack the files and let you start playing. This can be particularly frustrating if you've been staying up to midnight to play a new release, only to wait another hour as Steam unpacks the files.

Valve has yet to make an official announcement or comment on the technology, and the patent was only recently discovered but was actually filed back in March 2020. Either way, if Instant Play ever actually comes to Steam, it will likely be in a surprise update to the client as usual.

What do you think? When will Valve release the Instant Play technology? How will it benefit players? And have you used it before on other clients? What has your experience been like? Let us know!

Have you ever used a feature similar to Instant Play before? What was your experience like?

This will mainly be useful to those that have a high speed internet connection (100Mbps+) and can't wait for a game to download.

I was using EA Origin to download Star Wars Battlefront 2 and it had the play option available since 15-20GB or something but all it enabled was the offline Instant action mode on a single small map. it was a pretty sweet and worked very smooth no texture pop in issues or LOD reductions so yeah it doesnt affect the gameplay but its a very small slice of the game you get to experince. Mostly i use my PC for writing and gaming (more like GAMING and somtimes some Writing) so yeah i dont mind working at the side but my mates really get annoyed waiting. another thing being i happen to have good net speed and can easily download an entire game in a couple hours even if its a 150odd gb game but my mates have much slower speeds and it takes them an entire day and night and if its more than 80GB then another day as well. so yeah this is a cool feature but this needs some expansion. in Gears 5 you could essentially do the first training section of the story game

I wonder if this idea is that was being mentioned by a Google Engineer regarding Stadia having Negative Latency.

you forgot that MS does it on the series x and series s.

I believe some Activision Blizzard games, some EA games on Origin and I think some games on PlayStation do this. But experience varies and it really depends on your connection. I personally prefer to just fully download game and that way everything always goes as flawlessly as it can. Otherwise you can get things like lower quality graphics, missing sound effects, or even features, which sometimes won't even tell you when they are done downloading or that you need to wait, just won't work. So I am going to be more old school and just wait for it to download fully before playing.

Literally the equivalent of typing "first" on a youtube video that already has over 200 comments.

Blizzard and some EA games have been doing this for ages now. XD

And many times its worth the wait for it to download.

And this just goes to show that out of those 60-120GB+ games, 80-90% of the file size is just the graphics, because when you play them while downloading you are stuck at low settings.

I'd much rahter have the option to download much smaller game sizes with worse graphics, than have these huge files taking 5% or 10%+ of my disk just for a single game.

I'm too old school for this instant play stuff. Like XquatroX, I'd much rather wait.

This is going to be huge for Aussies and anyone who might not have the fastest DSL available, I love it!

I play games with a friend and his net is slowwwwwww, so this will be helpful in getting us both in a game without having to wait on each other. Probably gonna be buggy at first, much like everything else that's new, but it's a step in the right direction if it works well.

if his net is so slow wouldnt that mean that there will be a lot of lagging like now he is both downloading and playing, i remember back when i had !^%#ty net i had to pause everything i was downloading if i wanted to play online

Honestly yeah, it'll probably be laggy for him and depending on how they host servers it could hamper more than help. But we won't know for sure until we can test it, but that's a solid hypothesis for sure!

I've got a 1Gbps internet plan so I'm probably never going to need this for the 30-40 mins max it takes to download basically anything but this could be very good for people with slower connections.

Given the choice between "instant play" with more telemetry and just waiting for the download to finish (which isn't really a problem for me with my net) - I'm probably still leaning on just waiting.