For a while now there have been rumors that Nvidia is launching a ‘Super’ refresh for their RTX 30 series, similar to what they did with the RTX 20 series. However, there hasn’t been a lot of substantial credibility behind them until now, and we even have some potential early specs revealed as well.

Previous rumors had nothing more than just ‘heard they are coming’, which is not terribly exciting. But now we have two interesting sources: first of all, credible leaker kopite7kimi has revealed some early specs for the RTX 30 Super series; and secondly, HP seems to have accidentally confirmed the existence of an RTX 3080 Super.

In terms of the latter, HP revealed their new Envy 34-inch all-in-one PC that was spotted with an option for an RTX 3080 Super graphics card. Granted, this could have been a simple mistake (or possibly even a placeholder), but it does add some credibility to the idea of an RTX 30 Super series launching sometime soon. 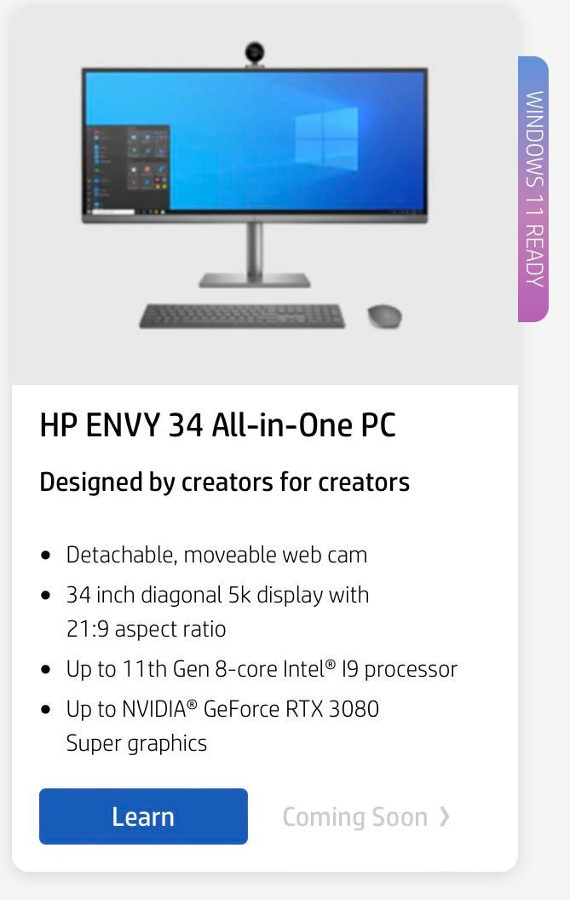 Whilst there are definitely some oddities in the rumored specs, they do sound familiar to what happened with the RTX 20 Super series. If Nvidia follows the same path as back then too, then we could see the RTX 30 Super series take over the base versions of the GPUs, and with little stock left of them that transition could be pretty easy this time round.

Hopefully MSRP prices will remain the same (theoretically anyway, as they will be inflated either way), as was the same with the RTX 20 Super series. The rumored specs provide a fairly big or small jump depending on the model, hence why we mentioned the small oddities (RTX 3060 seemingly gets a massive boost, whilst the RTX 3070 gets barely anything).

It is still worth noting that these specs can change every so slightly before launch, and the leaker (kopite7kimi) casts their doubts over the naming for an RTX 3090 Super. So with that, take this information with grain of salt, but it certainly sounds like Nvidia is gearing up for some sort of refresh next year.

Of course, Nvidia hasn’t said anything official yet. The current rumors also suggest a January 2022 launch, most likely coinciding with CES 2022. If this is the case then we shouldn’t have to wait long until Nvidia makes an official announcement.

What do you think? Are you interested in an RTX 30 Super series? Do you think it will help or hinder the GPU situation overall? And how do you feel about the rumored specs? Let us know!

Are you interested in an RTX 30 Super series launch?

I'd be annoyed if they came out with a "3090 super", though who knows at this point. IIRC, there were similar rumors back in 2080Ti days and 2080Tis remained safe from becoming "super". That being said, the speculated 3060 Super would cannibalize everything right up to 3070Ti (others seem to have caught that as well), so it seems highly unrealistic as a product launch.

Just thinking in overall terms - this whole thing is dumb. Imagine a world where you have normal, "Ti" and then "super" versions of each card just from Nvidia, then multiply all of those SKUs by however many "Gaemrr Brrr Tri-Wind-Force OC XXL RGB Pro X" editions the partners would come out with for each of those... It's a consumer choice nightmare! Add on top the fact that a higher tier card won't necessarily have more VRAM (3060 having more VRAM than 3070Ti lol)... it's a mess. I sure hope these rumors are empty, but it's also somehow just stupid-enough to sound realistic in [insert current year].

i dont care if they come with super variants, tech ages quickly and there will always be something new around the corner, regardless if it makes sense for a consumer or not.

What works with phones/laptops/etc is not exactly what I expect out of CPUs and GPUs - they are components/parts, not standalone fashion accessories like other devices are. I don't think this sort of marketing should apply here.

its still bizarre to me how can you be annoyed by such thing, especially when alleged 3090 super will have something like 500 more cuda cores and thats it, in real world scenario all you are going to notice is just a different name in task manager and no performance boost. It makes me think that you bought 3090 not because vram or something other, but only because its the fastest, meanest gpu. And i will repeat again myself, tech advances fast and its normal for a company to release refreshed product in the middle of its cycle. Amd did it with its zen 2 XT refresh, intel did it with its KS refresh, nvidia doing it with super refresh, its just the way the cookie crumbles.

Thanks for the psychoanalysis of my shopping habits, but not really. I'm actually surprised you're not annoyed by the "fashionization" of computer components. I stand by what I said. They're not phones, they're not laptops, they're not purses. I understand very well that tech constantly moves and new stuff comes out, but this ISN'T new stuff - this is just new SKUs coming out of someone's ass because "super" is a trademark now. It's dumb - plain and simple.

You are welcome :D For lots of people new gpus are actually exactly the same as new phones or purses, your current gpu will perform almost the same (in 1-5% range difference), you will be able to do your work as fast as with new super variant, if that annoys you then im left to believe that you buy new gpu every generation mostly for that reason. Then again im repeating myself again, tech ages extremely fast and those users who buy latest and greatest have to face the reality that sooner or later faster model will come, otherwise they get annoyed by smallest gains in newer product...

Also one thing i havent mentioned that you dDONT HAVE to change it, its up to you

All of the Super cards seem useless except for the 3060, which if true will cannibalize the 3060, 3060Ti and the 3070. And that seem quite unlikely to happen. So very high doubt about it.

aye it would be an actual super option

3080 super allows the other two versions to coexist if needed.

overall, these will be new cards for people to pay more for when they get scalped.

This is all fine and dandy, but shouldn't they prioritize making more of their existing cards instead of pouring so much money into R&D?

I’m sure they’re swimming in money with this whole shortage thing going on. There is no feasible way to invest right now that would result in a significant increase in production, since the shortage is tied to raw material availability. If they wanted to help the customers however, they should prioritize production of smaller dies (lower end cards) to maximize the amount of units.

Well I guess it's good that we will get more gpus, but it's not like they will be any more available will scalpers on the loose nor the prices will be at msrp lvl. At least AMD is selling their gpus from their own site, with the exclusion of 6600XT

I'm interested in GPUs selling at an MSRP and not only an MSRP, but an MSRP that is fair. So far this and last generation of GPUs(and the gtx 1000 series) were very overpriced at MSRP.

These cards will be EOL at launch but I guess in this current extreme seller-driven market Nvidia could probably get away with paper print-outs of GPUs for money.