Yeah, yeah, we all like to joke about Skyrim being the game that never dies and every year is re-released on some new hardware like your Samsung fridge. This year’s is a little different though, as the anniversary edition bundles a lot of mods from the Creation Club into one package, but it seems like the sacrifice will break pretty much most other mods.

The main problem with Skyrim Anniversary Edition is that it won’t be a separate game on platforms like Steam, instead it will be an update to the existing Skyrim Special Edition. The problem with that is it is completely changing the compiler used to build the 64-bit version, and as such breaks pretty much most mods available today. 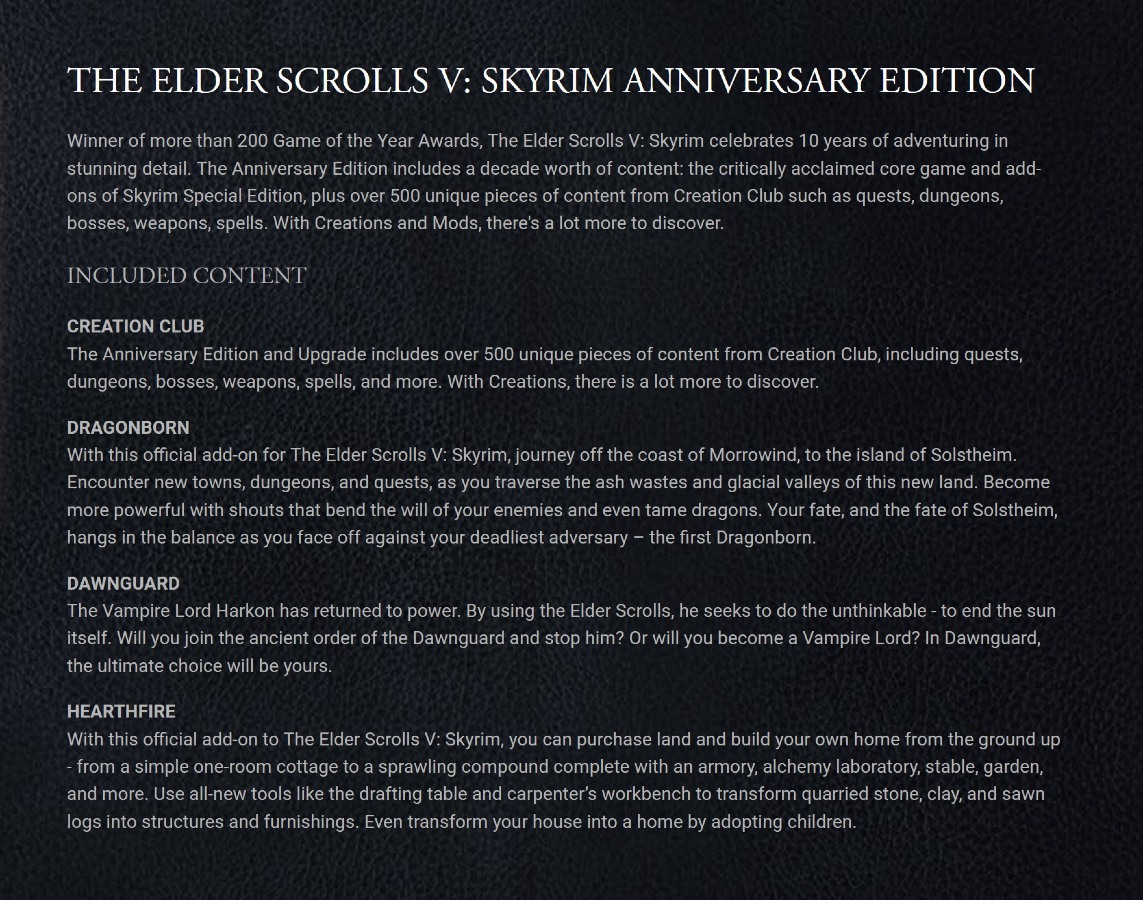 The reason for this is that one of the most popular plug-ins for Skyrim is the SKSE (Skyrim Script Extender) will need to be updated. The creator of SKSE says that this isn’t much of a problem for them, but other mods and plugins? Some of them have been left alone as their creators have moved on, doomed to be incompatible with the latest version of Skyrim.

“Bethesda has decided to update the compiler used to build the 64-bit version of Skyrim from Visual Studio 2015 to Visual Studio 2019,” said u/extrwi on Reddit, one of the developers for SKSE. “This changes the way that the code is generated in a way that forces mod developers to start from scratch finding functions and writing hooks.”

“I can probably sit there over a few nights and bang out an updated version of SKSE, but my main concern is for the rest of the plugins out there. The plugin ecosystem has been around long enough that people have moved on, and code is left unmaintained. Effectively everyone who has written a native code plugin will need to do at least some amount of work to support AE.”

Basically, a lot of modders will need to start from scratch in getting their mods compatible with Skyrim again, which “realistically means that the native code mod scene is going to be broken for an unknown length of time after AE's release.” So don’t expect any of your downloaded mods to work with Anniversary Edition for a while after launch.

The good news at least is that you can always revert back to an old version of the game where your mods are compatible, and chances are if you’re already modding Skyrim then you’ve probably turned off the auto-updating feature on Steam already. But the situation is not a good look for arguably one of the most iconic games for modding.

What do you think? Are you excited for Skyrim Anniversary Edition? How often do you use mods for it? How many mods do you have? And how do you feel about ANniversary Edition potentially breaking most of them? Let us know!

How often do you mod your games?

People will go back and pick up the abandoned mods, at least the good ones, so there's not much to worry about!

in other news: The sky is blue and most birds are capable of flight.

Unless the game is almost pretty much a remake I have no interest in AE cuz the "official" mods have either better ones outside of it or I just don't want the mods(a majority of them). Instead of including mods in ur game actually make a remaster and not an 'update' to the exact same game. Don't do another lazy attempt like SE was. Or heck move on to other franchises and stop milking Skyrim like this, it deserves so much better than its currently being treated.

Yeah, that is why I'm not upgrading to AE. There isn't really anything I'm all that interested in.

I feel like I'm the only person who hasn't played Skyrim at this point, but shouldn't a sequel have been made by now?

its in development for quite some time now

You're not alone. I haven't played any Skyrim game either

Why the hell can't this just be another SKU on the Steam shelf???

I have to remake all my mods again? Are they serious? A lot of us have moved on. Mods are created with the labor of love. This just forces us to go back and remake stuff all over again because a lot of people's enjoyment depends on them. Just leave it to Bthesda to break a working system. Why after all this time?

Just don't update your game. SKSE may take time. Even iof SKSE gets updated, it will take time for mods to ctach up with the latest SKSE.

Unless there are massive improvements to performance with huge mods installed it won't be worth the trouble and I don't see any performance improvements. All I see in the new version is focus on more integration of Creation Club.

So then we need mods for Skyrim, Skyrim SE and Skyrim AE? Why bethesda, why?

Launch your game with Vortex or MO2 and don't update. Its not ideal but its the only viable solution at the moment. And yeah it is painful.

In a way, it kind of makes sense to replace Special Edition with Anniversary Edition, since remaster in between kind of makes no sense to keep. But yeah, mods will be bit of a problem for those currently playing. I am pretty sure it won't take long for major mods to get updated. Also just like with Special Edition, any abandoned mods will likely get picked up by new authors or get alternatives, as long as they were popular. I know I switched few mods back then. So main concern really are more niche mods. But overall, yeah, if you are playing right now and will on release, disable updating and you are good till you get thumbs up for all your mods or find alternatives.

Personally I will pass on it for release, like played it few times, so I am in no hurry. I got other games to keep me busy right now, as well as to do list for games I still need to play. And personally I am bit meh on another remaster, I get that they want to port it to new consoles, but still. I am good till TES6 or maybe even Starfield, not sure if it will be good, but I am curious. We will however still have to see if curiosity will kill this cat... :-D