Intel is getting ready to launch their next generation of Core processors soon, and although they haven’t officially confirmed it yet a previous leak suggested a November 4th release date. That’s not too far off, and as such some retailers have already received the CPUs and have accidentally leaked some pricing.

The leaked pricing is for the flagship Core i9-12900K and Core i7-12700K, which are the top-end chips of the lineup so far. The price leak also mentions a November 4th release date, which is on track with the previous launch date leak. Thanks to @momomo_us on Twitter for snapping up a picture of the product page before it was taken down. 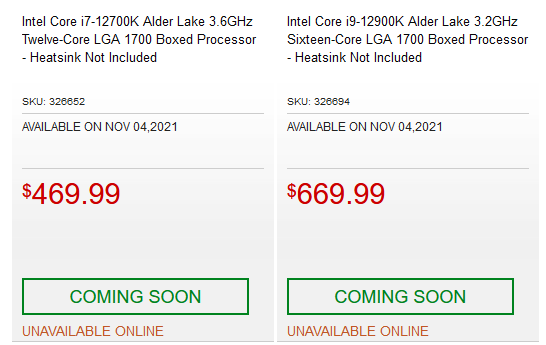 The main reason is likely due to the increased core counts (albeit, made of half performance cores and half efficient cores), and when you compare it against what AMD is offering at the moment they’re actually a lot cheaper. Clearly Intel is trying to offer a cheaper CPU than AMD core-for-core.

Of course, that means we’re likely to see a price drop for the Ryzen 5000 series so AMD can compete against Intel’s new launch, so expect that around the time Intel finally unveils their Alder Lake chips (which will be in just a few days on October 27th at the Intel Innovation event).

All in all, take this information with a grain of salt as usual, but it looks like we might be expecting a price increase for Intel 12th gen Alder Lake. Core-for-core that’s not too bad when comparing against AMD, and if any of those leaked 12900K benchmarks are true then it certainly makes some sense to Intel.

What do you think? Were you expecting a price rise for Alder Lake? Do you think the prices are fair in terms of core-for-core comparison against AMD? Or are they unfair compared to Rocket Lake? Let us know your thoughts!

What do you think of the supposed 12900K price?

What do you think of the supposed 12700K price?

Prices are too high. But it is what it is. Especially with the chip shortage still going on until 2023

seems like ill be lookin for an 6th gen i7 or a tray cheap R5 2600, theirs a lot of tray chip here in 3rd world online market most comin from china

I doubt intel CPUs will have shortage issues, they're not made using TSMC 7 nm like AMD stuff

While pricing can change on moments notice till they set it in stone with official announcement, provided MSRP holds, those prices definitely feel too high. Especially if Intel wants to get back some of that good grace AMD stole. Because for those prices, they will need to deliver some pretty heavy punches in terms of performance. So I guess we will see, plus if nothing else, if it at least performs well, I guess we may see AMD go back to being consumer friendly and lower prices till they get Ryzen 6000 out to up them again.... I still can't wait for reviews to pop up.

First time in 4 years Intel comes out with something remotely interesting and they just couldn't keep it in their pants when it came to pricing. But this is a fcking capitalistic dystopia we liven in where companies need to just launch anything without even trying to be competitive and it will still get sold out.

That is what I meant when I said a while ago that PC components have become commercialized to the point of phones and designer purses... shiny trailers (TRAILERS!!!!!!) with epic music for various components, price hikes, people grasping on "leaks" and other things that don't really matter if you are not a toddler and have full grasp on the concept of "waiting", review cycles circle-J'ing each other and boosting record sales, etc... It's quite ridiculous, especially the trailers...

At this rate I won't be moving away from my 10400 anytime soon. Not that I really need to considering I'm still running 1080p 60fps. Same for my 1070. Maybe next year, when the choice doesn't involve not eating for a month.

hmm you're forgetting that intel CPUs have made little progress before ryzen, I mean from 2nd to 7th gen, the number of cores on i5 and i7 hasn't changed. Basically competition => more rapid improvements from both sides (and not to forget the impressive numbers from ARM based Apple M1).

As for games using 6/12 C/T, BF5 which is few years old is using like 80-90% of my ryzen 3600 meaning there will probably be games that benefit from extra cores in next few years, especially when you also consider that current gen consoles have 8/16 C/T.

"If CPU was good in 2013 like some I5 you could use it well until last year. There is not going to be game in next 5 years that need more than solid 6c/12t CPU . Still good 4c CPU's are doing good work ."

4core i5's has been obsolete for a while now (provided you play latest AAA games with it). In games like cyberpunk, bf 2042, guardians of the galaxy, quad core cpus, without SMT/HT cant even hold 60fps and it will be terrible experience. Those games and others, actually put very extensive workout for 6c/12t i5's and r5's with around of 70-90% of total utilization, which is not good indication of its lifespan especially when upcoming cpus like alderlake and zen 4 are increasing core counts again, on top of that, all current console generation is 8c/16t so for this generation we are going to see proper 8c/16t utilization in upcoming years. current 6c/12t cpus are good for vast majority of gamers but ih ardly think that it will be "solid" in 5 years. 4c4t cpus are not doing any good work and are mostly obsolete for newest games.

One can justify buying new CPU or not. Generation is generation , PS5 and XBOX is here to stay ,we still have PS4 . Every year you will have new stuff but fact that you can still play games of this year on i5-2400 , almost every game in 1080p is fact. You doing this and this and is is 70% workload , ok go for 50%, go for 40%,people buy on mass . I just can say i will bet anybody that in 2027 we will play on 6c/12t . it doesn't matter what exist but what is this generation standard. Inside that window you have space ,RX 580 or gtx1060 is not same as the year of release but it is still target for people to buy and play games for this year and the next. If you buying new CPU every 2 year than you buy wrong CPU , you need stronger class . Don't count frames play game .

Mostly a matter of clockspeed. I play Guild Wars 2 as my main game, and it's very CPU dependent; clockspeed being key for performance. But its definitely a "want" not a "need".

I think you are looking more for "instruction per cycle" aka ipc, clockspeed is just only one thing out of many aspects that makes fast single core speed. But yeah if i remember right guild wars 2 is very sensitive to single core speed and latency between cores and ram, it doesnt utilize a lot of threads and in massive raids it can get quite heavy.