CES 2022 gave us a look at some brand new hardware coming in the future, and even some not too far off! Such is the case with both Nvidia and AMD, who both recently announced brand new entry-level graphics cards launching soon during their CES 2022 presentations.

The RX 6500 XT graphics card is launching on January 19th for $199, a new entry-level GPU that rivals the recently announced RTX 3050 during Nvidia’s CES 2022 conference. In terms of specs revealed so far, we’re looking at a 2.6GHz Game Clock speed (the “fastest sustained GPU clock rates ever”, according to AMD), a TBP of 107W, and 16MB of Infinity Cache. 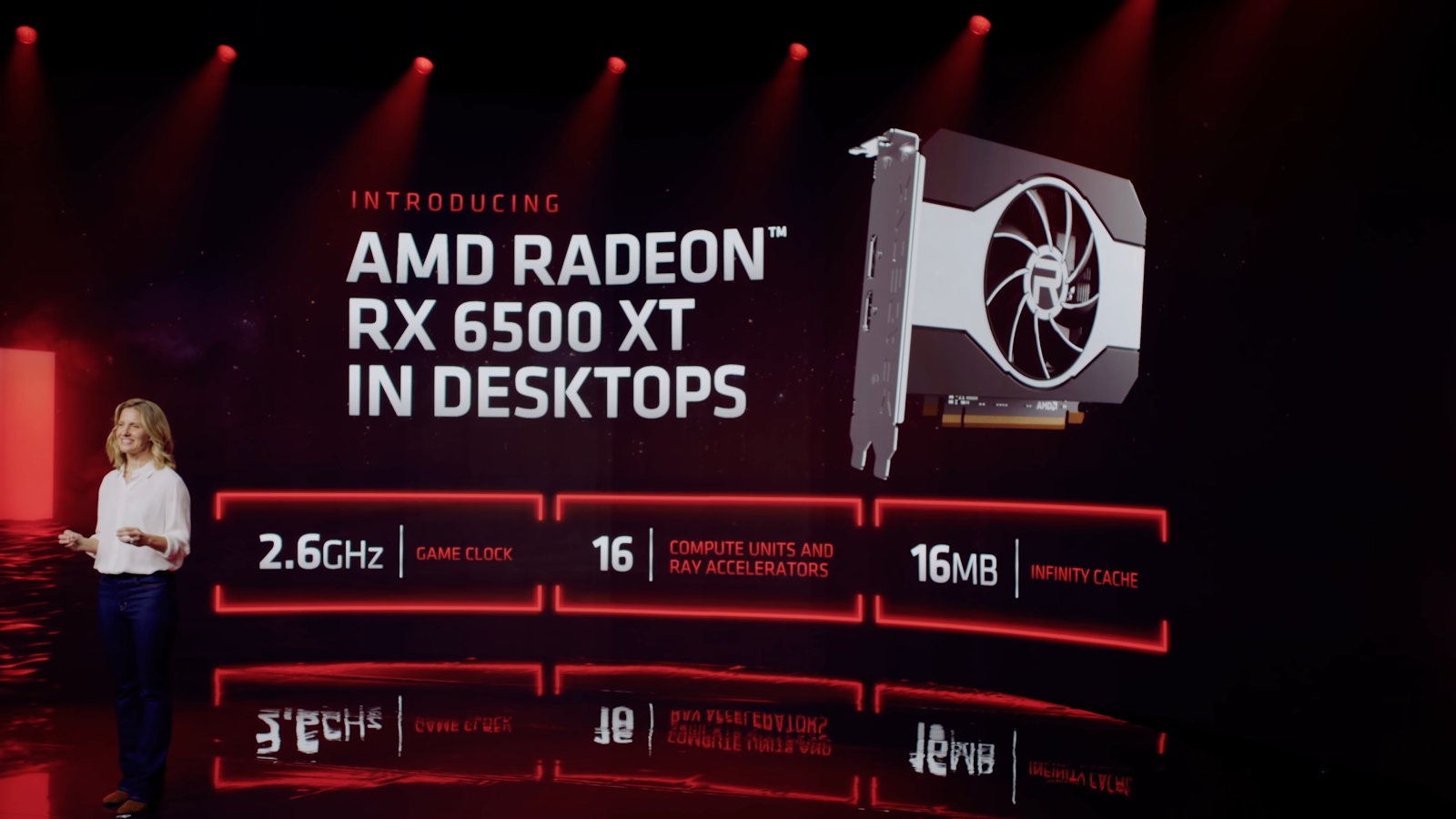 AMD has been focusing a lot on VRAM capacities this generation, and has generally sold cards with higher video memory than Nvidia at the same performance tier (something that Nvidia is clearly trying to target now as well with the RTX 3080 12GB and RTX 3070 Ti 16GB variants). However, the VRAM for the RX 6500 XT is only 4GB of GDDR6.

4GB of VRAM certainly isn’t bad though for an entry-level graphics card, but AMD fans who were hoping for a memory monster yet again may be disappointed. The RX 6500 XT also features 16 Compute Units (1,024 RDNA2 cores), which is half the amount of cores in the RX 6600 XT.

But what about performance? AMD claimed that “almost half of desktop gamers” are using either a GTX 1650, RX 570 graphics card or lower. Given that, the RX 6500 XT apparently performs up to 59% better than either of those two GPUs at 1080p. At least according to their own benchmark data. 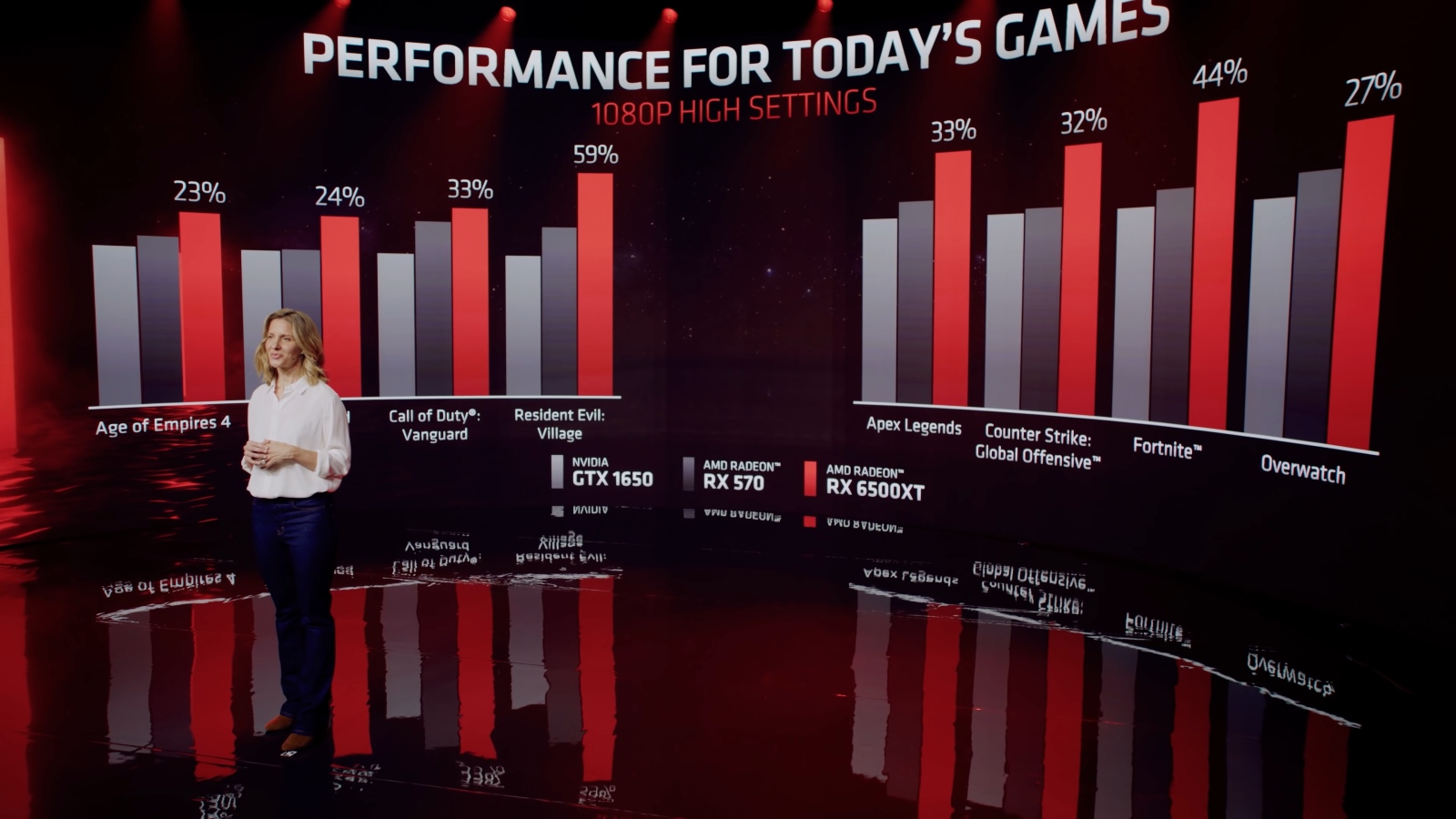 *(Back 4 Blood is the game behind the presenter)

On the official product page, the RX 6500 XT apparently can deliver anywhere between 60-100fps in some of the latest AAA titles at 1080p High settings, which is not bad for a card of this type. With an entry-level card we should also see higher availability at less inflated prices. One can only hope though, as who knows what 2022 has in store for GPU availability and pricing.

What do you think? Are you excited for the RX 6500 XT? How do you feel about the price and performance? Is it good for the price? Or is it too expensive for how it performs? And what are you hoping for the final specs to be? Let us know!

What do you think of the performance for the price?

Well, CES is a "Consumer Electronics Show" - you will see all kinds of companies talking about their stuff, from cameras an TVs to GPUs and cars. It's not GTC (GPU Technology Conference) where the focus is GPUs...and even then GPUs are driving car AI lol.

$200 GPU that's probably only as powerful as an RX580/GTX1060, but like 5 years newer. Should be a basic budget card by this point. Also watch it sell for way more than that cause of the shortage.. Ha.

Ah, right. Still for the time passed I'd expect more. But these days what can you expect.

Nah, it's GDDR6 that screws with the MSRP. If we were still using GDDR5(which would be too slow and slow down performance) this GPU would easily cost 160$ MSRP, not 200$.

Regardless of MSRP and performance and whatever, right now the GPU market is completely f*cked and prices will stay inflated even after the global chip shortage ends and mining dying down with crashes and ethereum finally going to proof of work.

It will never be the same again like before 2020.

I really want one but I live in Africa

This should be a 170$ GPU. The rest is great. Also I think it goes without saying that it won't be available at or around MSRP.