Yesterday, it was revealed how long it would take to fully complete the highly anticipated and upcoming sequel to Dying Light, which apparently would take at least 500 hours. That statement then received some backlash from players, and the developers have now clarified how long it will take to complete the main story and all its side quests.

According to Techland, Dying Light 2 will actually only take 20 hours to complete the main story, if a player decides to skip all side quests and extra content. If you do feel like completing all the side quests along with the main story, then it will take around 80 hours. For those who want to explore every nook and cranny, receive all endings and find all the collectibles, that will take 500 hours. 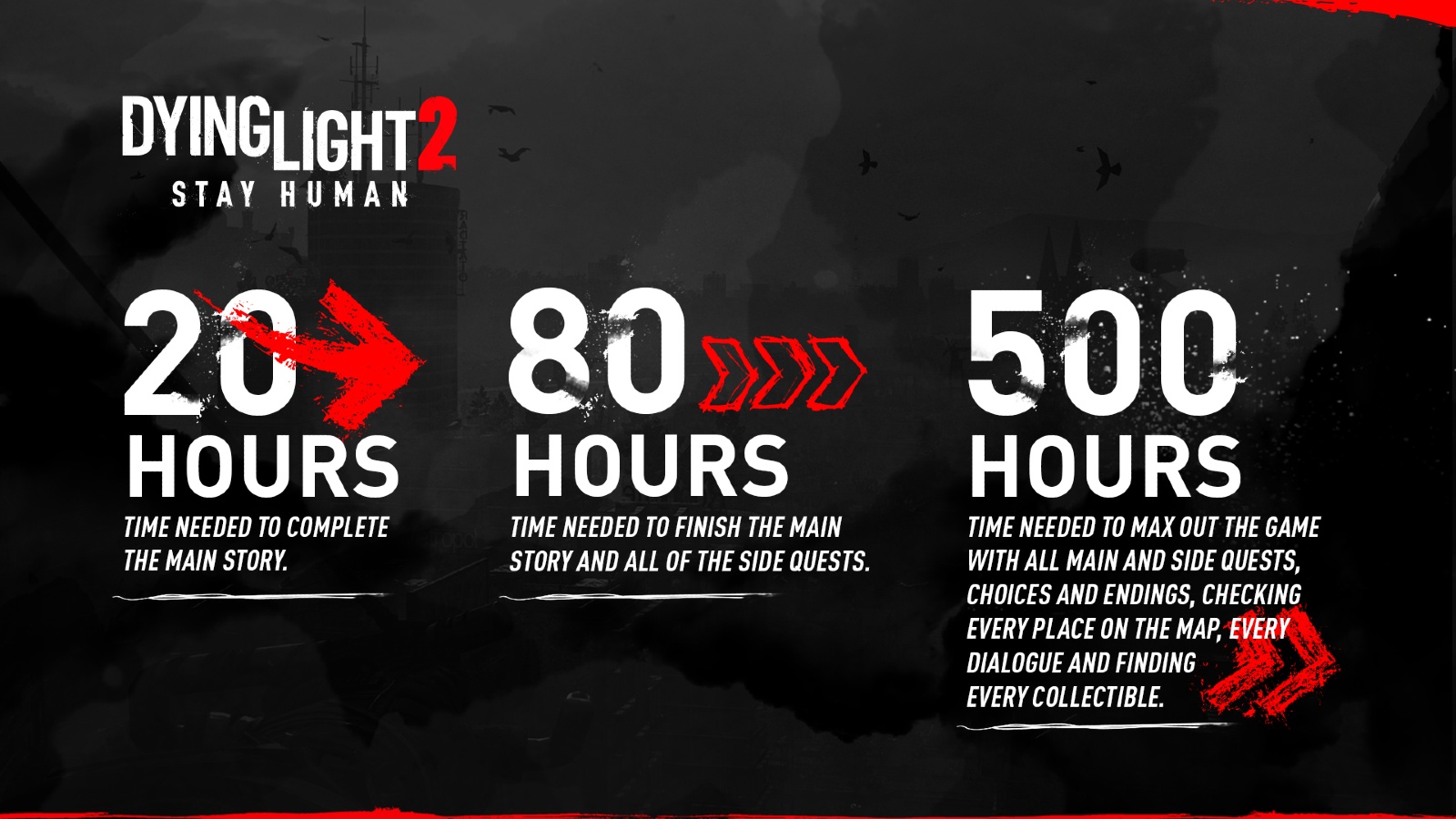 “We wanted to clarify our recent communication about the amount of hours required to complete the game,” the official Dying Light Twitter account stated. “Dying Light 2: Stay Human is designed for players with different gameplay styles and preferences to explore the world how they see fit.”

Although the 500 hours playtime was initially meant to be seen as a positive statement, many players online said that it was simply too long to complete a game. Additionally, many doubted how many of those 500 hours would be done through story content, and claimed the number might be bloated due to collectibles and repeat playthroughs.

So it seems like the latter group was maybe correct. If it only takes 80 hours to complete the main story and all the side quests in DL2, that means another 420 hours are spent on collectibles and repeat playthroughs. To some that may seem disingenuous, but 80 hours is still a decent amount of time to get the most out of the game.

Is 20 hours too short to complete the main story?

Do you normally play games just for the main story or side quests as well?

20 hours of main story is too short for somebody?.. Whatever drug you're on - quit it.

Man,i miss the good ol' times when i had all the time in the world.Even 20-some-hours game is a stretch for me.Steady job and two kids later - all back to Duke 3D and Episode I Racer.

I know man. It sucks. I finally got some money, and I can afford some things. I bought a new laptop and in the last two months, I only played Doom Eternal for 10 hours... I have 15 games in the library that I want to play, plus more that are coming and I just know that I will never have time to properly play them...

Now that I have a full time job, seeing games with such a long campaign is amazing but it saddens me that I simply don't have 20 hours anymore to just play games like I had back in high school.

It usually takes me a month to complete a 20-30 hour game nowadays, but at least the game stays fresh because of my inability to marathon games.

I am fairly confident that the last game I just completed: AI: Somnium Files would have been a repetitive and annoying venture if it weren't spread out over 22 days. Especially since I don't typically enjoy games with heavy anime themes, but sometimes a friend's recommendation is worth venturing into genres' you don't typically look at.