Stalker 2 has been delayed until December 2022

The Stalker franchise has long been a cult favorite, which meant that the new and upcoming sequel is one of the most anticipated games of 2022. Originally set to launch this April as part of one of the biggest years for gaming, GSC Game World has revealed that they have officially delayed the game to later this year.

Stalker 2 is now officially launching on December 8th 2022, a whole 8 months later than originally planned. That’s a pretty big delay in terms of going from one set date to another compared to other game developers, but those ones also tend to have multiple delays that would eventually span the same period. So maybe ripping the band aid off in one go is a better move. 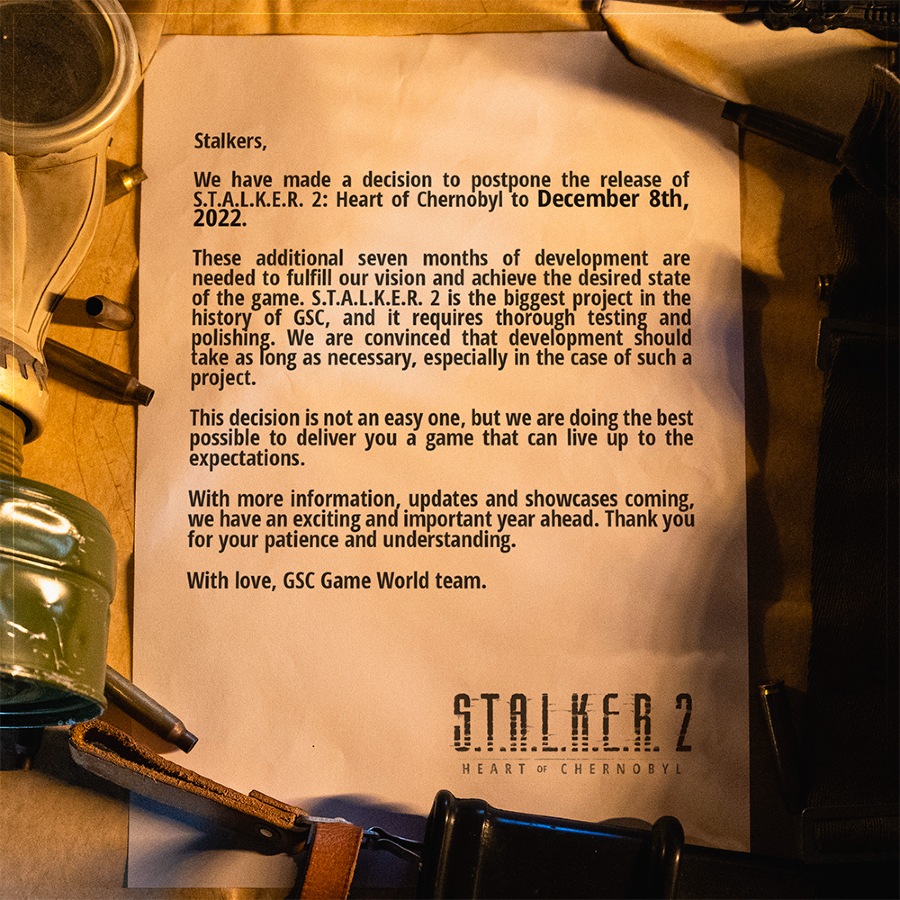 “These additional seven months of development are needed to fulfill our vision and achieve the desired state of the game,” said the developers in a statement. “Stalker 2 is the biggest project in the history of GSC, and it requires thorough testing and polishing. We are convinced that development should take as long as necessary, especially in the case of such a project.”

It’s possible the delay also has to do with the recent announcement that they would be bringing NFTs to the game, only to cancel plans immediately the day after due to negative backlash. Unfortunately, GSC Game World did not clarify whether the NFT cancellation had some hand in the delay.

On the other hand, despite being so close to the original release date, we have barely seen anything in terms of gameplay for Stalker 2. Thankfully, that will change soon as the developers said they will be revealing “more information, updates, and showcases” over the year up until launch. Hopefully the official PC system requirements will get lowered a tad.

What do you think? Are you excited for Stalker 2? How do you feel about the lengthy delay? Do you think it has something to do with the NFT announcement and subsequent cancellation? Let us know your thoughts!

Do you think Stalker 2 will be delayed further?

Take your time guys, dont be like everyone else and just release an unfinished mess

It's a good game, but it didn't build enough hype for me to care lol. I can wait as long as it takes nowadays.

I mean STALKER in general are good games, where's the edit button :(

They were developing and testing the NFTs first and now since that fell through they went "oh, crap!" as they realized the game needs work too xD

Yeah,this game looks more and more in the same line like "Dying Light 2" and "Cyberpunk".And it have only 1 very scripted and cut gameplay so far.

AAA gaming is a joke right now. And it will continue to be so. They announce a release date early, then delay the game.

im probably splitting hairs but i dont think GSC game world is AAA studio, more like AA? But still i understand your point and i kinda agree, however plans and goalposts may change and since many devs work from home, it might be difficult to direct everything well, thus countless recent delays in various studios. I personally think that its still best to announce release date when you are absolutely sure that you will release by then, but yeah

The reality is that game dev can get expensive for these high quality titles, so you start needing investors and their money. One of the things investors want is to know when they'll start getting a return on their investment, so the "release date" for a game is more for them, not you or me. And because these are international businesses with various teams across the world - you also need a release date for marketing, events, etc. Setting a date like that is important, but it actually affects everyone else much more than it does me or you (well...me especially so - I really don't care when games come out... I really REALLY can't be bothered "waiting" for any particular game...)

How about devs stop announcing specific release dates until they're sure they can hit them?

Then gamers will scream: Its a scam and that the game will never release

na, what I mean is specific release dates.

Like, instead of April 2022 to December 2022 they could have moved it from early 2022 to late 2022, or they could have just announced that it was coming out in "2022" until they were far enough along to know they could finish it by a specific date.

Gamers can scream then. For the community that generally thinks of itself as "hardcore" or whatever - there sure are plenty of whiny babies who can't wait for a toy to come out...

Who would have thought huh? At this point if any AAA game does not get delayed it will be a miracle.

I now see it as a marketing stunt, they want us to think that they do smth, they try to make the game better, polish it, by adding some extra time to gain fans respect, but in reality we saw enough games this year that got delayed numerous of times and still were released in a broken state, how do you delay the game in order to "fix bugs" and still fail at it...