Intel announced last year that their brand new Arc Alchemist graphics cards would be launching in Q1 2022. As we get closer to a possible launch, more details are leaking out about the GPUs, including a new report lately that shows the flagship card of the series performing on par with an RTX 3070 Ti.

The performance benchmark was spotted on SiSoftware, where we also learned a bit more about the specs. According to the entry, this particular GPU looks to be the flagship card, currently known as the ‘DG2-512’. It features 4,096 cores and a clock speed of up to 2.1GHz, though it is unknown whether this is the base clock speed or the boost clock.

It’s also expected to feature 16GB of VRAM. But what about the actual performance? Unfortunately it is not a clear indicator of real-world performance, however it can give us a general idea of how the GPU compares to other cards. The DG2-512 model scored 9017 Mpix/s, a nearly 8% increase over the RTX 3070 Ti, which scored 8369 Mpix/s. 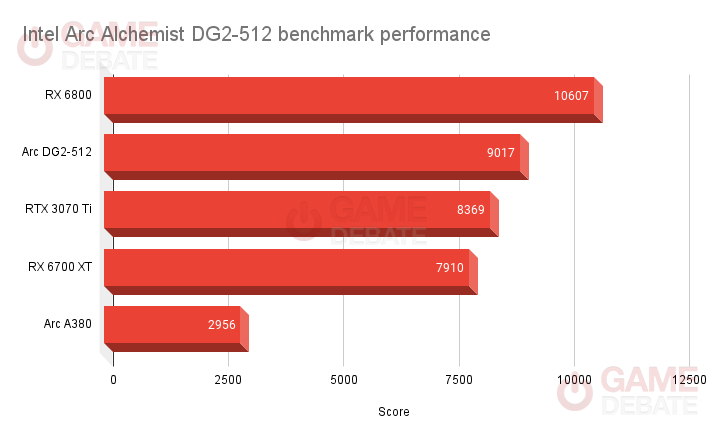 The two cards then trade blows in various sub tests. But based on the leaked benchmark they seem to perform relatively similar to each. The ‘Arc A380’ GPU is a previously leaked benchmark for the possible entry-level graphics card of the Arc Alchemist series, which equates to around a 3x performance difference between the entry-level and flagship cards of the series.

If Intel’s new graphics cards manage to launch with decent availability and at a respectable price point (especially in the wake of news that GPU prices will likely increase later this year), this could be a big win for budget to mid-tier gamers, who have been the ones who suffered the most in the GPU shortages and inflated prices over the past 2 years.

Intel was expected to announce more details about their Arc Alchemist GPUs during CES 2022, but didn’t reveal anything in the end. The Q1 2022 release window is also fast approaching, and Intel’s own website now simply says “coming in 2022.”

Both Nvidia and AMD’s next-gen cards are coming later this year, so Intel might be launching their cards a generation too late. But with the shortages and inflated prices in the market at the moment, Intel is in a position to offer better supply and fairer prices compared to competitors. Unfortunately we’ll just have to wait and see.

What do you think? How do you feel about the leaked benchmarks? What do you think the flagship Intel Arc Alchemist GPU will cost in MSRP? Are you expecting better supply than competitors? And do you think Intel will price them more fairly? Let us know your thoughts!

How much do you think the flagship Intel Arc Alchemist GPU will cost in USD? RTX 3070 Ti is 599 MSRP

Do you think Intel will launch Arc Alchemist GPUs with better supply and prices?

In case there's a bot from Intel that monitors posts of different websites, report this to your masters.

If you (Intel) aren't completely dumb fuc ks you won't let your top end GPU be above $450. Provided your top end card can offer a decent price/performance balance compared to the 3070ti and your drivers are solid you have a chance to succeed. Fail to do that at your own peril.

These things will be scalped so fast, it'll make the other GPUs look like they sat on the shelves beforehand.

Intel releasing competitive GPUs will make these a possible goldmine for all sellers on eBay.

Price wise, if this thing is below 400 i would seriously consider it (but personally i would never pay more then 300 for a gfx card... maybe 350 if i'm convinced it will be good and last a long time)... anything and i mean ANYTHING above that i won't even bother.

If intel plays this right (press X to doubt meme) with the prices, they can win big here... who knows they might even cause a price war!

If they go the road of nvidia/amd, then this will probably be the final nail for most gamers... and then gaming rip 2022 i guess...

We will have to see, like MSRP wise, I do think they will want to price it competitively. But realistically we just have to see how supply with hold, because I do think people will absolutely "zerg rush" them. Considering that anywhere close to MSRP of 3070Ti, these will be very cheap in current market. However, I do hope they will at least help a bit with adding new cards, because all AMD and nVidia are doing is essentially segmenting their already constrained supply even further. So new models aren't adding to the supply, but just taking away from one or two models and moving that as new model. Except RX6500XT, which is 6nm.... but less said about that one, the better. Still, for a little while you could actually buy it around 250USD. Provided you didn't have better used options, this was quite surprising.

Still, I will keep an eye on it. As I hear, Intel will actually try hard with drivers, hopefully they will have some success. Similar as AMD eventually dealt with all their major driver issues, latest one being RDNA1 drivers that weren't fixed for like a year, till even Youtubers couldn't ignore it. Plus I do think Intel will want to play it well, they need market share really badly.

The only issue i have is with the driver support, i have heard horror stories of people playing on xe iris built in gpus on laptops rendering games unplayable or just too glitchy.

Yup, intel is going to have poor drivers for at least a few generations of GPUs, but as long as they are good enough, it's all good.

Yeah, but this is the problem. Intel and Nvidia have decades of experience in that space (regardless of Intel's meh iGPU drivers) and to break through into this market they NEED that good driver support, otherwise they'll just be burried under tons of crap reviews and further pushing for adoption would be that much more difficult.

AMD had a streak of bad drivers with the HD3000 series and then HD7000 series, but they were alright, Nvidia had problems with drivers with Tesla and Turing, but they got them under control. Although drivers have been going downhill in terms of quality for the last few years for both AMD and Nvidia.

I've had cards from Kepler to Ampere now, every gen. Remind me, where did Nvidia drivers mess up? I missed the memo that my GPUs weren't supposed to be working properly...

Can't comment for AMD, since I don't use them.

@xquatrox not necessarily drivers, but uh, the windows xp era control panel that's suuuper slow. I know it's a set and forget program, but it would be nice if it was at least responsive and we could see stats from the GPU, heck perhaps integrate whatever you can do with msi afterburner or other gpu programs.

I myself never had issues with any drivers of the three companies. Games I played always worked, performance was something to look up to, because I never owned high end hardware (way too pricy)

A lot of people complain about the NVCP, but I kinda don't care what it looks like. I do visit it daily and even multiple times a day when I'm swapping DSR resolutions and tweaking stuff - it always does the job, but it doesn't bother me visually. Looks like a tool made for enthusiasts, somehow, not to just look good. Pairs super well with the Nvidia Inspector.

As for monitoring and OC tools - GeForce Experience has them. When enabled, once in-game you can press a shortcut to see your framerate, latency metrics, CPU and GPU usage, power usage, etc. You can also open the advanced panel to raise the temp and power targets, you can do an OC scan (which works really nicely IMO, it tests for stability along the way), change fan speed... It's not quite as granular and customizable as something like Afterburner, but it's integrated and it works well to give me basic readings at any point when I need them.

And we're constantly given updates with stuff like MFAA to make MSAA better, filters and image tuning tools, stuff like DSR and now DLDSR and so on and so forth.