DICE and EA have had a rough time since the launch of their latest Battlefield title, with player numbers dropping across the board following vast amounts of criticism online. There’s still some hope for the Shooter though, and DICE is clinging on for dear life. So much so that they have officially delayed the first Season of content in order to focus on player feedback.

According to the developers, Battlefield 2042 Season 1 has been delayed to Summer 2022. It was originally supposed to launch in Spring and includes new Specialists, maps, game modes, and more, along with the first Battle Pass. Players who purchased the Year 1 Pass with the Gold and Ultimate editions of BF2042 will be getting compensation. 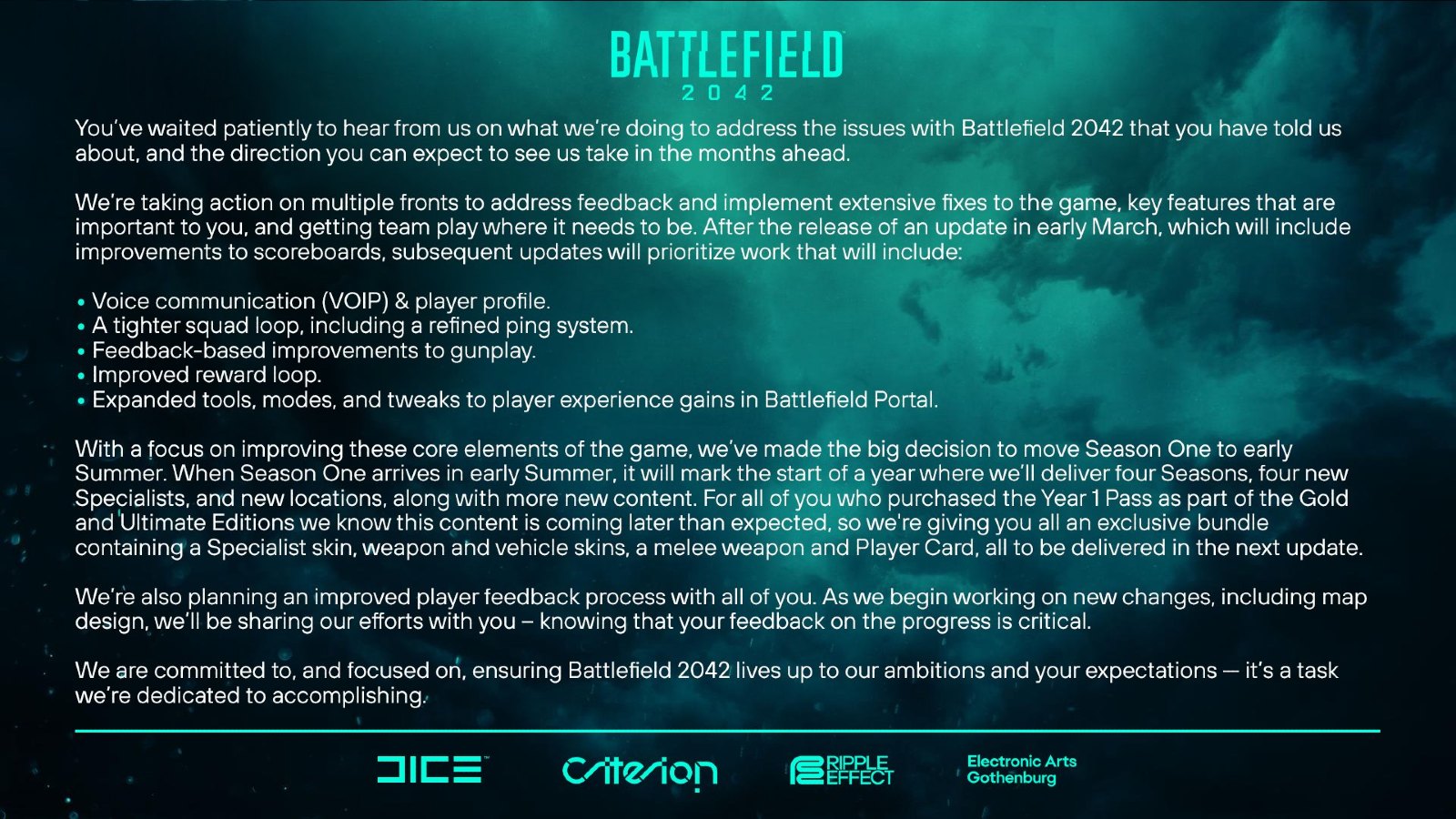 Up until Season One launches for Battlefield2042, DICE will be rolling out updates as part of their new “player feedback process”. The first update drops in March 2022, and will include many fixes as well as new features like an updated scoreboard, player profiles, and VOIP (voice chat).

For those who purchased the Year 1 Pass already, DICE acknowledges that Season One is launching later than initially promise, and so will be compensating owners of the Battlefield 2042 Gol and Ultimate Editions with the Steadfast Exclusive Legendary Bundle that contains a Specialist skin, weapon and vehicle skins, a melee weapon and a Player Card. The bundle will be available to those eligible in the next update. 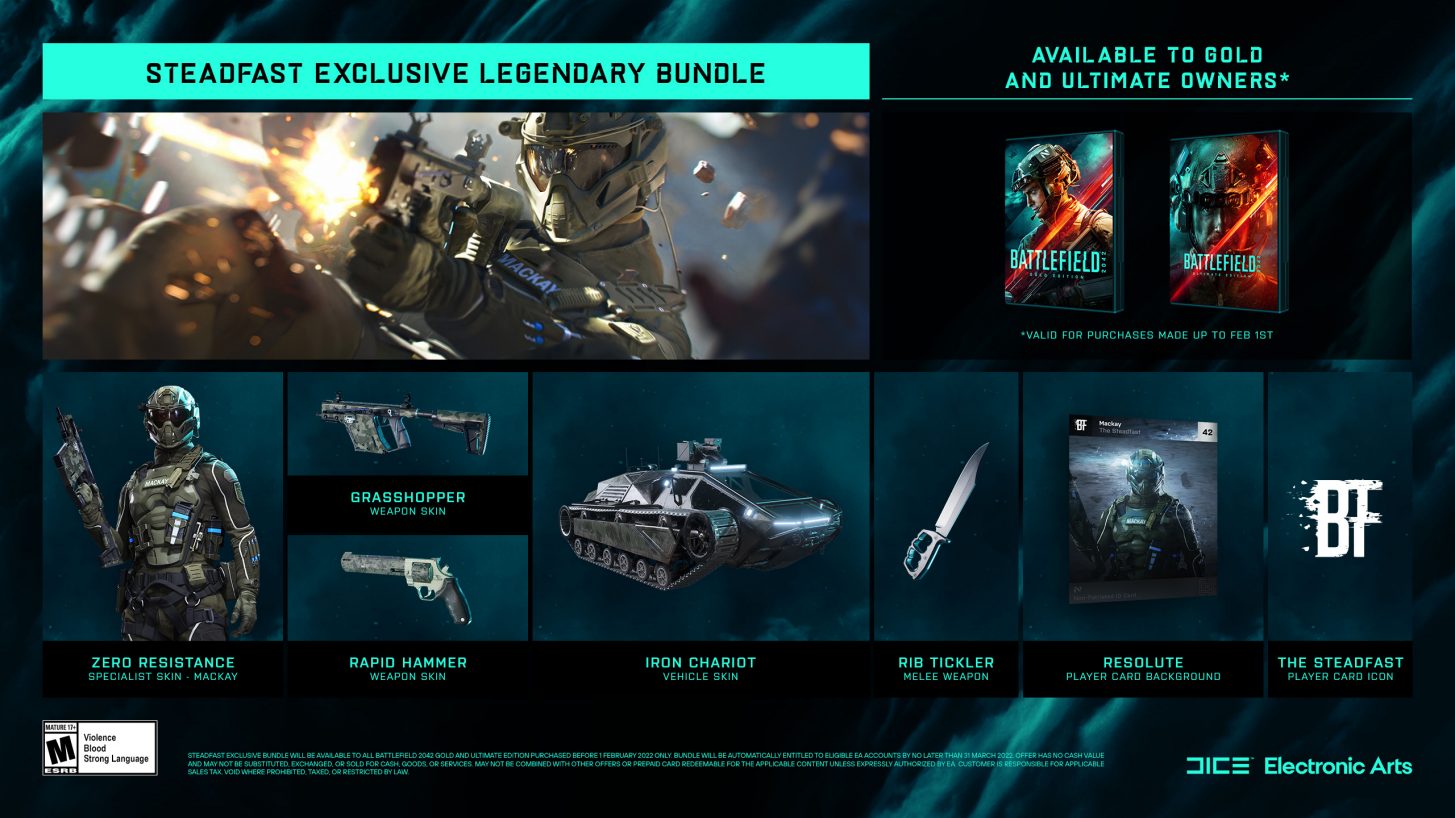 As part of their new Feedback Loop program, DICE will be outlining what they plan to change, then ask for player feedback, after which they will revise the plans and so on until both parties can reach a consensus. These include “analysing Specialists” with a dedicated team, as well as overall map design for new and upcoming locations.

It’s a step in the right direction at least, especially after the controversial launch. Currently, there are almost 4 times as many players logging into Battlefield 5 every day on Steam than there are in BF2042. So clearly players are not happy with the major changes to the overall Battlefield formula. Hopefully this new system will begin to change that.

What do you think? Are you excited for the changes coming to Battlefield 2042? Do you think these will help the game at all? Or is it just a lost cause now? And how do you feel about Season 1 being delayed? Let us know your thoughts!

Are you excited for Battlefield 2042 Season 1?

Which new feature are you most happy about?

With how broken or controversial DICE's last 3 games have been (Battlefront 2, BFV, 2042), I think it'll be safe to alter the quote to: "Don't be sad, this is just how it works out every time."

At this point, I'm wondering when EA will kill the studio much how they've done many others for far, far less. Maybe they'll just turn DICE Stockholm into a support studio at some point.

i dont think BF franchise is going anywhere anytime soon, AFAIK it still nets some pretty decent profit and it is very well known and established franchise. Just look at COD its been bellow mediocre for how many years? yet we see new cod every year. As for BFV ehh it definitely had rocky start sprinkled with bunch of drama, remember "if you dont like it, dont buy it" 😂 but at deep discount i dont think its bad buy these days. Unfortunately they changed class system in 2042 and it seems they are sticking with it despite the backlash from many fans and casuals.

At best, I can see them maybe making Hazard Zone f2p and overhauling it to actually make it interestiing because it was basically DOA. At this point, they need to pull a No Man's Sky, but I seriously doubt the current DICE (and EA in general) is capable or remotely willing to do that.

I wonder who exerted the pressure to get it released in the state it was and I wonder who called the shots to push it through.

I am sure there are many who work there who also were not happy with it, but simply had to do the work they could in the time they had.

So it isnt the player base thats out of touch...

I trust Dice, they can fix it like Star Wars Battlefront 2. I believe in them, although, it is very very hard. The game is dead now with low player base , it is a very difficult situation. I hope the series won't die.

I can't see them pulling a Battlefront 2 again, as there was at least passion there. BF 2042 just seems like a soulless game made just to chase what's trending and failed miserably in the process (idk if the restructuring of management will save it). Honestly, any trust you have in DICE is misplaced in my eyes, but only because most, if not all, of the veteran devs who gained that trust and were responsible for the successful turnarounds have notably left by now, sadly.

I don't see the performance fixes in that list so I guess it's back to BFV for now.

What DICE and EA needs is to FIX the entire GAME! But yet again THEY DON'T LISTEN until the player overwhelms them with so many NEGATIVE REVIEWS!