As technology improves, so does its power consumption, usually. We’ve heard terrifying rumors that Nvidia's upcoming RTX 40 series could reach power draws of up to 850W, which understandably can be a cause for concern for a lot of people. But what happens if you decide to limit the power consumption of a high-end GPU?

Thankfully we now know the answer, as according to some tests done, the flagship RTX 3090 Ti still beats out an RX 6900 XT when limited to just 300W of power, and even still outperforms the RTX 3080 10GB and 12GB models. Obviously it loses out on some performance over the unmodified original GPU, but the size of that hit may surprise you. 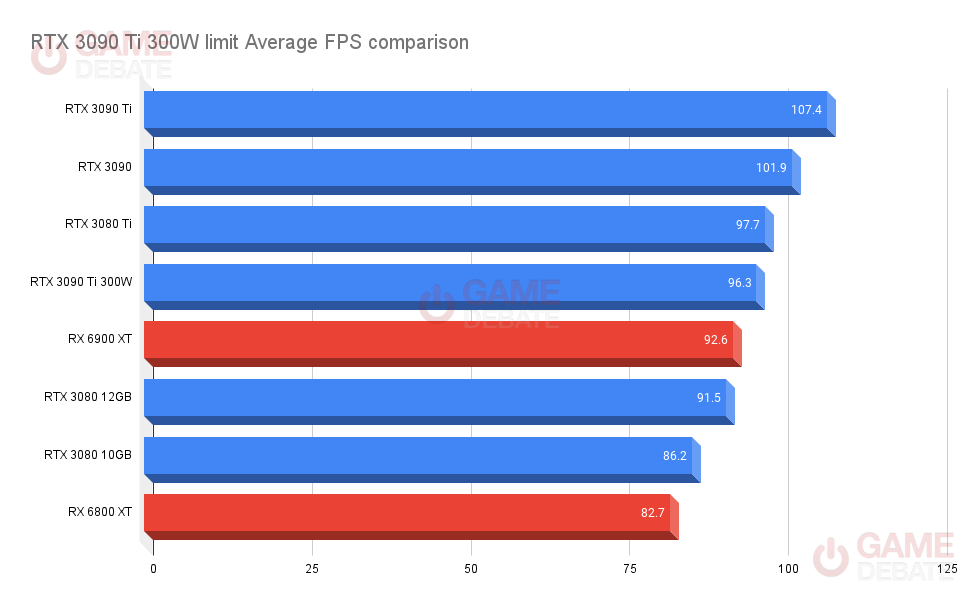 That becomes all the more impressive when you remember the RTX 3090 Ti has a TDP of 450W. So reducing power consumption by 33% results in just a 10% performance loss which, if the rumors are true regarding Nvidia’s RTX 40 series, could be a justifiable sacrifice to keep those power draws down.

Of course, not everyone is energy conscious when it comes to their graphics cards, and if you’re spending upwards of $2000 on a GPU you may not want to choose to limit its performance. It is a hypothetical exercise to see how limiting power consumption would affect frame rates for a high-end card, but that doesn't mean it won’t have some applications for future GPU generations.

What do you think? Are you surprised by the results above? How conscious are you about GPU power draw? Would you sacrifice some FPS for reduced power consumption? Or would you rather get the most out of your hardware? And how would you feel applying this technique to future GPUs if their TDP is as high as 800W? Let us know your thoughts!

Do you care about GPU power draw in your PC?

And the top end next gen GPUs from nvidia is supposedly even hotter then that. 600w RTX 4090 like bruh wtf thats wayyy too much

With the price of energy that tripled in the past two years, it's definitely a very important factor. I wouldn't mind if the increase is about 20% while gaming, but idle power draw is a very critical note, as I use my PC a lot during the day for workflow stuff that don't require the performance the system can deliver.

It isn´t just the power draw considering the increased bill, is the heat generated. The more power draw the more heat must be generated, therefore a bigger cooling solution is needed and the hotter your room gets.

To be honest, the heat generated by the PC in a room is not significant enough to be a valid argument. I know that from about a decade ago where I only had a 65W laptop, and the room would be as warm in the summer as with my (up to) 530W desktop (30 degrees C). Yes, the room heats up quicker with a more power hungry desktop, but the time it takes to reach that delta is quick (took my laptop, considering I, a human also produce heat, about half an hour to heat up my room). My desktop will reach this point after 15 minutes of gaming. I don't know about you, but I can't just have a 30 min session, if I play, I play about 2 hours and if I have really nothing to do, could stretch it to 4 hours.

Depends on what you're doing. When I was mining with 3-4 GPUs - the PC rooms would turn into a literal sauna, I kid you not.

A single GPU wouldn't do that much while gaming a few hours here and there, but rendering/mining is FAR from insignificant, especially as multiple cards are concerned.

depends on where you are as well, I'm in a a loft conversion in a 3 story house, so I'm on the 4th floor and playing stuff like control or cb2077 really makes this room hot.

I don't know what it is with lofts, but even without a PC in our previous house the loft bedroom would just be unbearable in the summer...

I don't care much about the power draw but the less power it draws, the cooler it stays and the fans are quiet. I wouldn't limit my performance in games like that but in some CPU bound games the GPU just wastes power for nothing so I have keybinds from afterburner for different profiles on different power limits and change between them depending on what game I'm playing.

I never realy cared about gpu power draw, but if those next gen cards will realy be this power hungry I will probably start consider it.

Great for mining since gaming is dead.

Gaming isn't even close to being dead though.

It better do so, for double the MSRP. XD

Always! I've always wanted to have a mini nuclear power plant, now the government has no excuse to ban me from having one, or maybe with the RTX 4000 and RX 7000 series.