Anticipation is high for the next generation of GPUs, and Intel is set to enter the game and compete against the giants that are Nvidia and AMD. We’ve heard very little about the cards over the last few months apart from some leaks here and there, but they don’t yet paint a complete picture. However, we now at least know the names of each graphics card model the Blue Team is working on.

There are some Intel Arc Alchemist GPUs out in the wild already - though you’d be hard pressed to find them at the moment - thanks to the Arc A350M and Arc A370M mobile variants found in some laptops. Since the hardware already exists, Intel has been releasing driver updates, and the latest one included the currently planned lineup of desktop cards. 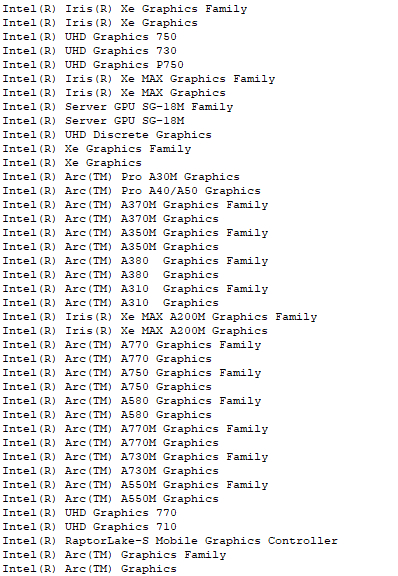 That includes the A770, A750, A580, A380, and an A310 model. There were rumors of both a high-end Arc A780 and budget A350, and although neither of them were seen in the driver update, Intel could still be working on them for later. Unfortunately, no other specs were revealed in the list.

Previously, Intel was aiming to launch the Arc Alchemist series in Q1 2022, but that has since then been pushed back to Q2 2022. It’s even possible now that we’ll see the RTX 40 series launch before Intel has a series to compete with the RTX 30 series, after a recent rumor claimed Nvidia will be launching their next-gen GPUs in Q3 2022.

What do you think? Are you excited for the Intel Arc Alchemist series? Do you think it will be too late of a launch for Intel? What are your performance expectations for each card? Let us know your thoughts!

Do you think the Intel Arc Alchemist GPUs will be launching too late?

Its releasing in China first LOL

Alchemist is definitely late, like they really will need to time it right to get it out just before release of next gen, so they can make profit on it. Otherwise it will be one generation behind and at price points Intel wants it to be, it just won't compete. But yeah, those driver issues truly did wreck Intels plans. If they released soon enough, they could have walked into the market of high demand and overpriced cards like a savior. Now they might enter in very competitive market where a lot of people will just wait for next gen. And I have no doubt that Intel knows they are screwed on Alchemist, but hopefully, Battlemage will be on time, now that they will have drivers sorted out. But yeah, releasing it sooner would be in the lines of be damned if you do, be damned if you don't. Since it is either late release or release with terrible drivers. Though now they don't really have choice, either get it out or don't, because if they miss and compete with next gen, they will need to cut prices down to meet next gen pricing, otherwise they might as well not waste resources.

Didn't we already know them long ago?