Intel’s upcoming Arc Alchemist graphics cards for desktop PCs still don’t have a release date in sight yet, but the new generation of GPUs from Intel are still available in the wild in limited capacity thanks to the mobile variants launching in laptops recently. Although they don’t give the full picture of how the desktop variants may perform, they do give us some insight at least.

However, the results leave a little room for improvement, at least in real world gaming examples. A user by the name of Golden Pig Upgrade uploaded their benchmark results on the Chinese forum Weibo. Their rig included the Intel Arc A730M graphics card, which isn’t the flagship model of the generation, but is the second-highest GPU in the mobile lineup. 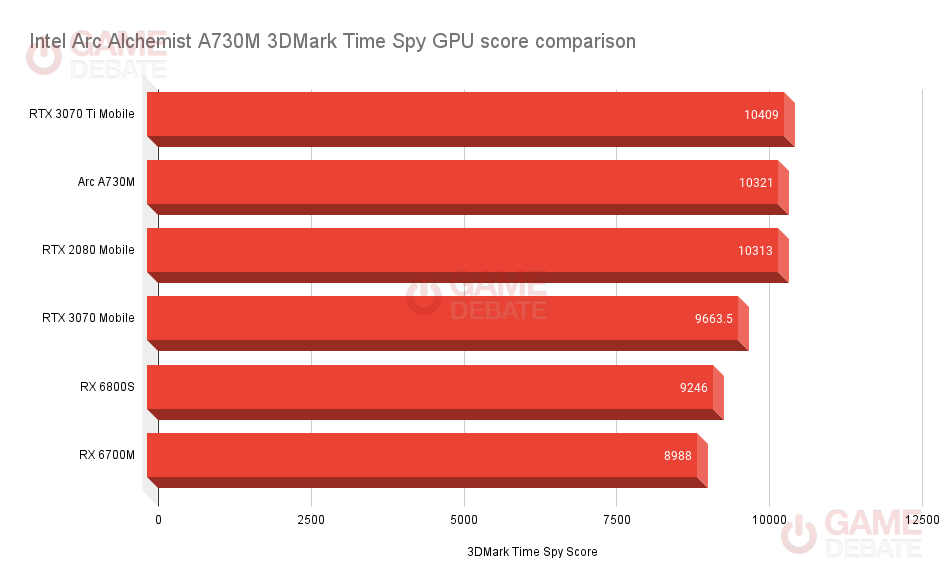 According to the user, the A730M scored a rather impressive 10138 in the 3DMark Time Spy benchmark tool. That score comes between the RTX 3070 and RTX 3070 Ti mobile cards, which is right in line with previous rumors of Arc Alchemist GPU performance.

However, the user also posted their in-game FPS on a variety of modern titles, and showed much worse performance than expected (not terrible, but certainly not up to the results of the 3DMark score). However, these could be down to early graphics drivers, so performance could improve by the time the desktop models come out. 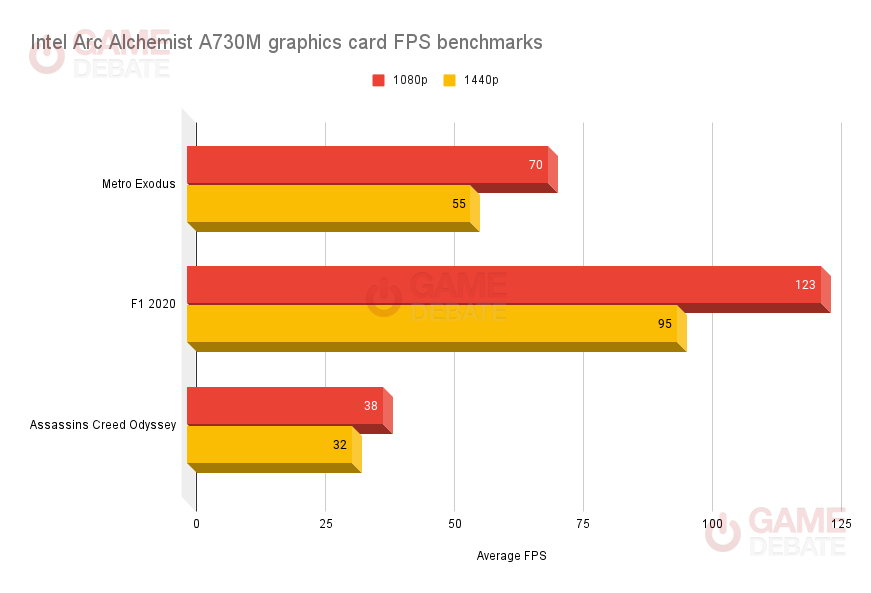 When comparing the FPS results above to other GPUs on the market, the Arc A730M actually performs closer to an RTX 3050 Ti or RTX 3060. Again, these aren’t terrible numbers at all, and are actually fairly impressive for Intel’s first generation of graphics cards, but the 3DMark score hinted at much more impressive performance. We’ll just have to wait and see when Intel releases their desktop GPUs, whenever that is.

What do you think? Are you excited for Intel Arc Alchemist graphics cards? How do you feel about the benchmark results above for the mobile GPU? Do you think they are good or not very impressive? Do you think the worse results could be down to early driver support or the hardware itself? Let us know your thoughts!

What do you think of the benchmark results for the Arc A730M?

What do you think is the main reason for the lower than expected FPS in games?

There was no real indication of laptop performance because the only thing they compared before was the desktop. It just happens the mobile version matches the 3070ti m version. the reason Intel didn't want to play that game is because of the different versions (based on watts) that Nvidia mobile GPUs can use.

until we get a desktop version, every "leak" we had before only works for them.

with each passing day, intel's software unit is killing their first real aib GPU. if they finally release the GPUs during the next generation of AMD/Nvidia GPUs, they will be dead in the water. their flagship will be nothing but an entry-level card and will only hear about how competitive it would have been had it released on time. Intel had the perfect chance to gain a huge market share and they screwed that up. i bet their graphic division dies a very public death which results in more investors suing them.

Further and further into the future Intels graphic cards are pushed, more and more it is starting to look like they might need a miracle to find success... Though to be fair, drivers are definitely the thing that caused all of this mess for Intel. If they got drivers right early, we would already have Intel graphic cards on the market for a year. Now they basically are in the corner, where they might just want to get out what they got and hope it isn't a disaster or not bother with Alchemist. Then again, second isn't an option due to investor expectations. So now they might have to do what they can and release, because delay isn't an option, Alchemist is pretty much dead, if it has to compete with next gen, unless they can pull "Polaris" move and have their top end card be like RX480, priced in midrange. They also can't afford high prices either, since they missed their train to be the hero, the savior, arriving right in between worst crisis. So yeah, Intel feels like they still kind of aren't pulling their act together in right way and delivering on time. Which may not only cost them much needed market share in graphic card market, but if they don't pull their act together with CPUs, AMD might keep their top spot. Intel really needs to take page out of TSMCs book, one where Apple told TSMC that they don't care what they achieve, they need new smaller silicon for every generation of iPhone, so they can say it is new whatever nm stuff, it doesn't matter if improvements are smaller, just make it happen and you can improve it latter. Or in other words, they need to start getting there in time, not late.