Although Summer usually marks a big season for game announcements like E3 (replaced this year by Summer Game Fest and other developer/publisher showcases), it also means we’re getting closer to the launches of the next-gen graphics cards from Nvidia and AMD, and the latter claims a pretty significant boost in performance for their RX 7000 series…

AMD recently said at their Financial Analyst Day that the RX 7000 series (powered by the next-gen RDNA3 architecture) has a projected performance-per-watt increase of more than 50% over the RX 6000 series (RDNA2), achieved through a 5nm process node and more architecture enhancements. 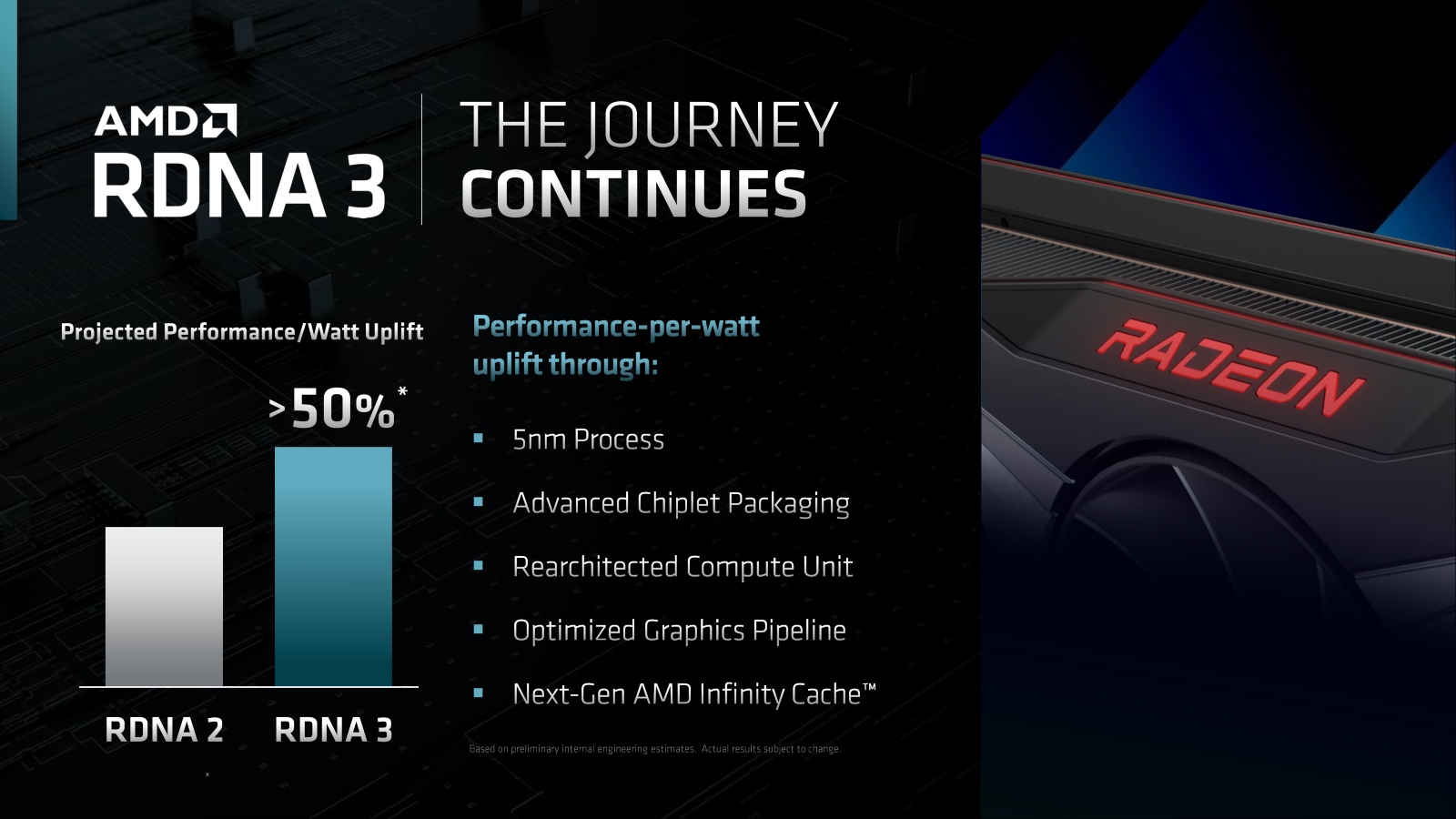 For instance, the RX 6900 XT has a TDP of 300W. So hypothetically speaking an RX 7900 XT will have a 50% performance increase at the same board power. That’s already pretty good, but considering that next-gen GPUs will likely have much higher maximum power draws, we’re looking at some serious performance improvements.

AMD also officially confirmed that they are moving towards a multi-chiplet design rather than monolithic, which will contribute to the increased performance uplift. Currently, the RX 7000 series is on track to be revealed and launch later this year, but rumors suggest that Nvidia could could be launching their RTX 40 series as early as July.

What do you think? Are you excited for the RX 7000 series? How do you feel about the projected performance uplift? What do you think will be the maximum TDP of AMD’s next-gen flagship GPU? Let us know your thoughts!

What do you think will be the maximum TDP of the flagship RX 7000 GPU?

What do you think of the RX 7000 projected performance per watt uplift?

I am making $92 an hour working from home. i was greatly surprised at the same time as my neighbour advised me she changed into averaging $ninety five however I see the way it works now. I experience mass freedom now that I’m my non-public boss.

That is what I do.. https://worksclick.com/

Even undervolted and underclocked 200W GPU and 65W CPU can heat my room significantly during summer, can't imagine using something that is 2x-3x that hot.

Same here, except that I haven't undervolted my CPU, but my GPU consumes 85-90W undervolted at stock clock speeds(no boost) and me playing games right now increases the temperature by 2-3C. I'm in a small room with a small window in my university dorms.

Same, except I won't buy a 6800xt either, it's also a space heater and I won't be able to squeeze it in a mini-ITX case.

The reason they came up with the 50% is that they use that number concerning the first 6000 flagship (6900xt) compared to the previous flagship (5700xt). On average its about 48% faster when figuring the power difference. they are pushing to repeat that going to the 7900xt. That means a power increase to enable more sm and higher clocks, again.

Looking at the 7000 ryzen should show you what AMD is doing with clocks.